This idea was shared by Andrius.

This is a speculative and timely idea mostly based on technical sell-off from the forced hedge fund liquidation.

$DISCA fell -47% from the recent all-time high. 10x the usual volume was traded on Friday and 5-6x on Monday (yesterday): 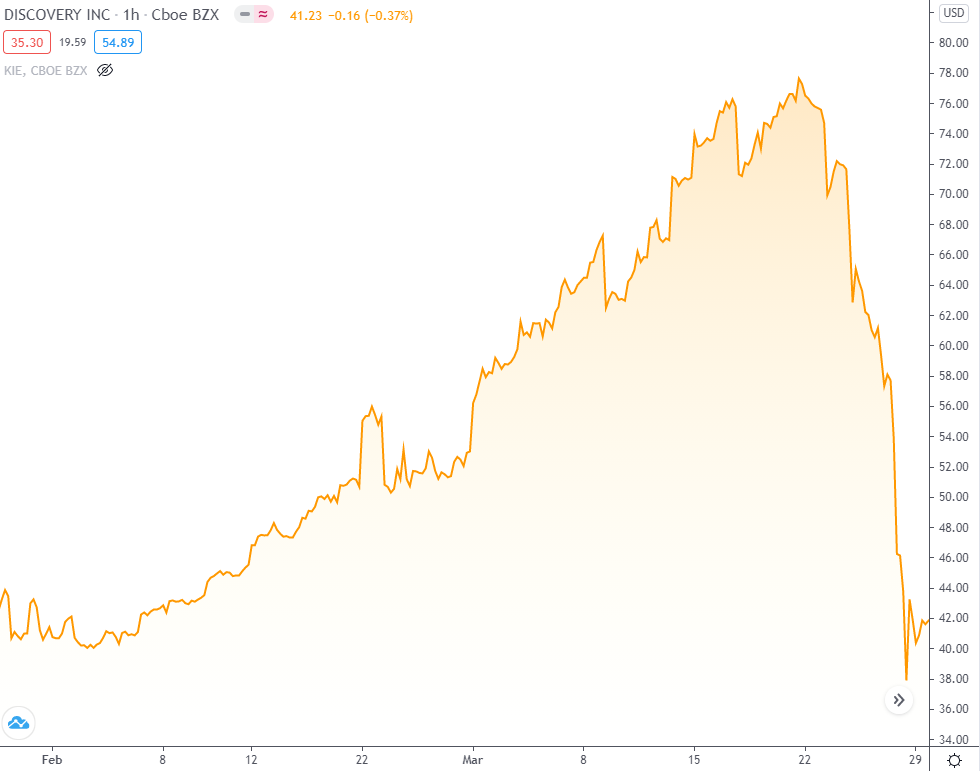 Apparently, at least part of this sell-off was driven by the liquidation of a major hedge fund Archegos ($30bn AUM), forcing investment banks to block-sell Archegos positions in the open market and thereby pushing the above-mentioned stocks to free-fall. Archegos was run by former Tiger Asia manager Bill Hwang, which in 2012 was found guilty of insider trading. Hwang used Archegos as its family office managing $10bn of Hwang’s family assets. However, on top of that, it is reported that the fund used a substantial amount of leverage (apparently 3 to 1) inflating the AUM to $30bn. Reportedly, Archegos held concentrated positions, including a mix of stock and swaps.

WSJ reported that sales connected to Archegos were continuing on Monday (yesterday) and there are rumors that it could continue for several more days this week due to further additional liquidations of other affected hedge funds. Most of the sold-off stocks continued to be volatile yesterday with the trading volumes being significantly elevated.

Given the magnitude of the sell-off (47% drop from its recent all-time highs), the current situation could provide an interesting play on the potential DISCA share price rebound after the forced selling and market panic are over. However, DISCA share price has now settled at the February’21 levels and the main question here is which price is a better reference point of DISCA fundamental valuation – recent all-time high of $77 or February levels around $40/share. I believe the answer lies somewhere in the middle as at least some part of the recent month’s price surge is justified by very favorable developments, which got the market excited.

DISCA annual results were announced on the 22nd of Feb. These showed modest top/bottom-line performance (revenues down -4.2% YoY, net income -41% YoY) due to COVID-19 related disruptions for advertising business and disruption in the European sports schedule. Despite that, the major positive catalyst was the unexpected success of DISCA’s new streaming service. Discovery+ was launched in January and in less than 2 months managed to attract almost 6m subscribers. As stated on the conference call, company’s direct-to-consumer segment subscribers have increased from 5.2m in Dec’20 (pre-launch) to 11m in February and are forecasted to reach 12m by the end of that month (the call was held on the 22nd of Feb). From the call:

Discovery+ is off to a fantastic start, and we couldn’t be more encouraged by all the early metrics. After 7 weeks since launching here in the US, we have over 11 million paying direct-to-consumer subscribers across our entire portfolio, and we will hit 12 million by the end of this month of February, an increase of 7 million net adds, as compared to 5 million subs, we reported in December. The vast majority of this increase is attributable to Discovery+.

The company also intends to expand the service globally during the next 18 months. Outlook for 2021 was not shared, however, the company stated that it expects 50% growth in next-gen revenue (streaming services, which is not reported as a separate segment) in Q1’21 with further acceleration in the following quarters:

We see both a very strong start to next-gen revenue growth in 2021 with Q1 poised to grow around 50% with meaningful acceleration in the quarters, thereafter, and a much more attractive investment opportunity around subscriber growth.

Another big catalyst could be the Olympic games this year. Discovery+, in advertising partnership with Snapchat, will be an exclusive streaming home platform for the European markets (in my understanding – the only streaming service to broadcast the Olympics in Europe). The company expects the Olympics to substantially catalyze the international expansion:

As we come out of the Olympics and go into the second half of the year, that’s when you’re going to see the acceleration of the international rollouts.

Next-gen revenue was about $850m in 2020 (8% of total revenues). Assuming the company can double it this year, just the streaming services alone would grow total revenues by 8% YoY. On top of that, the legacy advertising business is also expected to recover with the ongoing vaccine roll-out.

Overall, given the success/growth potential of the new streaming service and expected recovery of the legacy media/advertising business with the vaccine rollout and post-COVID recovery. I think it’s fair to assume that at least some of the run-up since February was justified. Once the sell-off is over, I expect the stock to rebound to some extent. 8% FCF yield should act as downside protection at current share price levels.

This event has caught the attention of WSB and there are multiple posts now covering the situation. WSB jumping on the “dip” might act as an additional catalyst for the rebound. Keep in mind that this is pure speculation, however, given the recent events of the year, WSB involvement could be an impactful factor here (even if negative sentiment seems to be higher than the positive one, whatever that might mean)