This idea was shared by one of our members. Although there are certain positive aspects to this situation, we think it is highly speculative with little possibility to handicap the potential risks (see the comment section below).

Mama Mancini is a fast-growing higher-quality packaged foods producer with a lot of room for potential expansion in the future. The company is ongoing a strategic review and has recently made an application to uplist to the NASDAQ. Management owns 48% of MMMB shares and sees multiple benefits from the uplisting:

If accepted, we believe that the uplisting would further expand the credibility of our brand in the industry, while concurrently increasing liquidity and opening up our stock to a far wider array of potential investors who cannot invest in OTC companies.

Generally, it is difficult to predict how a stock price would react to the uplisting, however, I do not expect a sell-off here due to 50%+ shares owned by the management and major shareholders. On the contrary, it’s quite likely that the market upgrade will boost the share price of MMMB. A similar effect was seen in COMS (uplisted on 22nd Jan), CUEN (uplisted on 1st of Feb), CRMD (uplisted on the 2nd of Feb). An uplisting procedure usually takes 5-6 weeks from the submission of the application.

Moreover, at current prices, the downside seems to be somewhat protected, while the upcoming annual results are expected to be record-breaking and should act as another catalyst here. MMMB business was positively affected by the COVID outbreak and grew revenues during the first pandemic wave as consumers shifted from restaurants to ready-made meals in supermarkets.

MMMB has solid fundamentals, a strong balance sheet (almost no debt), and during the last 4 years (since 2016) grew its topline 30% CAGR (9m 2020 growth was +27%) while more than doubling its EBITDA margins from 4.3% in 2016 to 9.8% (9m 2020). Despite that, MMMB is being valued significantly lower than its closest and similarly sized peer AMNF (also produces Italian-style packed foods, like stuffed pasta, sauces, cooked meat, etc.):

Some part of the discount is definitely warranted due to AMNF’s higher EBITDA margins (used to be around 20%). However, other than that, AMNF is growing significantly slower – less than 5% CAGR from 2016 to 2019. Also, in contrast to MMMB, AMNF was strongly hit by the pandemic due to the exposure to the foodservice sector (revenues fell 23% and EBITDA 80% during 2020). Eventually, further growth, expansion into other sectors (food service, Canada, vegan/Beyond Meat) should allow MMMB to better leverage its operating base and reach margins closer to AMNF levels.

A detailed bullish case can be found in the Alta Fox Capital’s write-up here – the thesis was posted during the peak of the COVID sell-off when the company traded at $1/share. 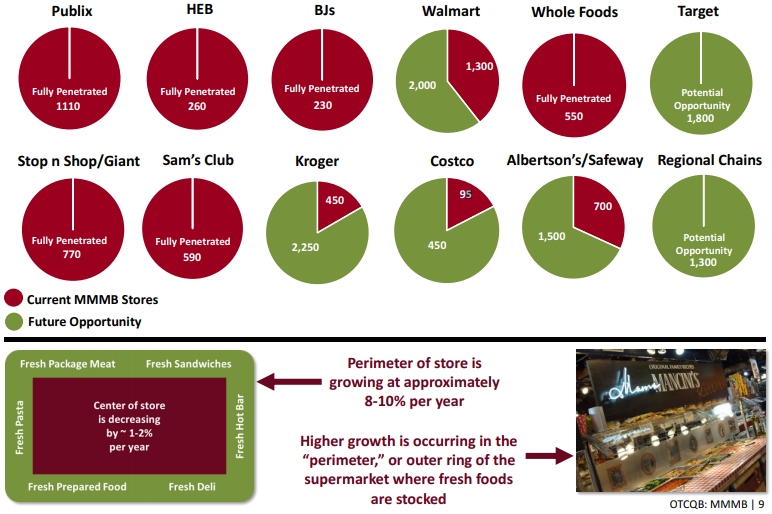