This idea was shared by Justin.

Corning Natural Gas Holding (CNIG) is one of the smallest natural gas and electric utility among publicly listed peers. On the 12th of January,  a definitive merger agreement was signed with Argo Infrastructure Partners (Argo), a private investment firm with a focus on electric power and utility industry, at an enterprise value of c. $150 million. Consideration stands at $24.75/share in cash. A 45-day “go-shop” period has already expired. Conditions include consent from 2/3rds of outstanding shares + the majority of preferred stock voting as a single class – ownership by insiders and activists suggest that shareholder approval should pass easily. Besides that, consents from the New York Public Service Commission and from the Pennsylvania Public Utility Commission as well as antitrust will be required. CNIG’s shareholder meeting is set for the 27th of May. The transaction is expected to close in late 2021 or early 2022.

Successful closure of this transaction seems very likely and the remaining 5% spread can most likely be explained by a relatively prolonged timeline.

Positive points of this transaction

Our team’s decades of experience managing gas and electric utility investments, combined with our access to long-term capital, places us in an ideal position to support Corning’s ongoing infrastructure investment program and management’s efforts in achieving its customer service goals. 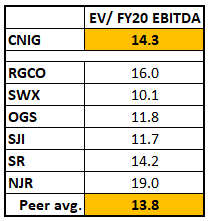 More background on CNIG can be found here.