This is a largest-ever credit union takeover of a bank. The transaction is similar to already covered BFFI, WEIN, and EGDW cases, where the acquirer is buying assets and liabilities of the target and then the target winds down by distributing the remaining proceeds to its shareholders.

On the 31st of March, Heritage Southeast Bancorporation signed an agreement whereby VyStar Credit Union will acquire all HSBI assets and liabilities in an all-cash transaction. After that, HSBI will distribute the proceeds to its shareholders and wind down its operations. The proceeds should amount to $27/share and are expected to distributed shortly after the asset sale.

The merger is subject to regulatory and HSBI shareholder consents. Given the size of this merger, regulatory consent should not be a problem.

The offer comes at 1.68x TBV, at a premium to historical trading levels and rather in line with peer acquisition multiples – southeast bank average merger multiple stands at 1.52x TBV (12 months ended Mar’21). Apparently, it is common for credit unions to offer a larger price to banks due to their favorable tax treatment.

The 9% spread is most likely explained by the small size of the transaction ($190m market cap) transaction, somewhat extended timeline, and at least to some extent due to unclearly worded distribution amount in the press release. PR states that the distributions to shareholders are estimated at $27/share but will be subject to adjustments based on various costs related to winding down of HSBI, treatment of the liquidation account, etc. The available information is still limited and more details will be included in the upcoming proxy. However, the disclosed details in the transaction summary show that all of the above-mentioned and other transaction costs are already accounted for and will be covered by the buyer:

In addition, HSBI is expected, prior to closing (and without affecting the distribution available to shareholders) to settle for cash all then remaining in-the-money stock options, unvested restricted shares of stock, and any stock-based SERP agreements (representing an aggregate value of approximately $7 million).

In connection with the transaction, HSBI is also expected, again, prior to closing (and without affecting the distribution available to shareholders) to satisfy for cash certain transaction expenses associated with the contemplated transaction, including the payment of professional fees, termination of employment contracts, and the settlement of certain cash-based SERPs (estimated to be an aggregate cost of approximately $15 million).

Overall, given that all of the expected costs are expected to be covered by the buyer without affecting the final consideration, it seems very likely that the eventual shareholder distributions will amount to $27/share or more. This is further supported by the condition that HSBI will have the right to terminate the merger if the final distribution amount to shareholders is less than $27/share. However, worth noting that the buyer has also reserved the right to cancel the merger if the total cost exceeds $284.5m.

The buyer seems credible, has already acquired a bank before (see below), and overall is unlikely to walk away from the transaction. Moreover, two similar transactions (BFFI and WEIN), which involved almost identical uncertainties successfully closed last year near the upper limit range of the consideration (more details below).

There is also additional upside if the timeline gets extended further – in case this transaction is not closed until the 1st of Nov’21, the total consideration paid by VyStar will increase:

In the event the transaction is not consummated prior to November 1, 2021, the purchase and assumption agreement provides that the aggregate purchase price paid by VyStar to HSBI will increase by an amount equal to HSBI’s consolidated net earnings from October 1 through the Closing Date. Any such increase would be anticipated to increase the amount of cash available for distribution to shareholders of HSBI.

Strategic rationale and the buyer

VyStar is the 16th largest credit union in the US with 63 branches, most of them in Jacksonville, North Florida. This acquisition will propel the buyer to 13th place ($12.5bn in assets and 85 branches). This is not the first bank acquisition of VyStar – in August’19 it took-over Citizens State Bank, a Florida state-chartered bank with $280m in assets and 4 branches. At that time VyStar CEO stated:

With the CSB acquisition and all future M&As for VyStar, the goal is simple: to grow into new markets and to bring the benefits of credit union membership to more people

HSBI fits this strategic goal as it will allow the buyer to expand in Georgia. A large part HSBI branches are in the coastal area of Georgia – i.e. in close geographical proximity of VyStar Jacksonville locations.

Not much information is available on VyStar’s loan portfolio, however, it seems that in 2018 most of it was residential mortgages and secured consumer loans.

This transaction type is completely standard among bank acquisitions by credit unions. Apparently, certain laws do not allow credit unions to merge with banks or even acquire bank stocks. Therefore, all such acquisitions happen in this form of purchasing assets and liabilities. In 2020 credit unions acquired 7 banks, 16 in 2019. Historical transactions: 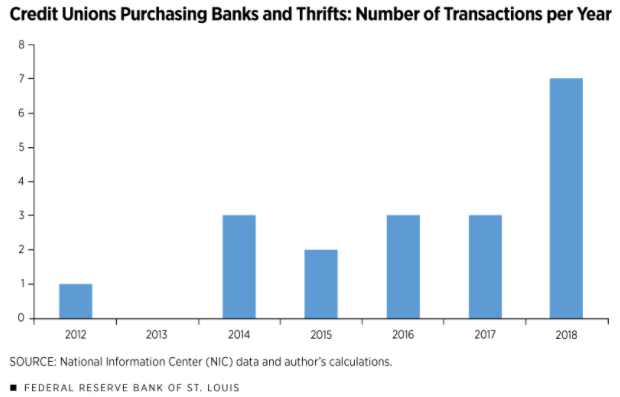 Strategic reasons for such acquisitions include expansion into other geographic areas, portfolio diversification, or acquiring new business lines.

Acquisition of an ex-mutual bank is a bit different and adds additional complication from the regulatory standpoint, e.g. treatment of a liquidation account, etc. These acquisitions were pioneered by WEIN and BFFI last year, both of which were the first credit union/ex-mutual bank mergers and had very similar uncertainties (and available information) to HSBI regarding the final merger consideration and treatment of the liquidation account. Due to these uncertainties, both of these cases had their expected shareholder distributions offered in a range. Both closed successfully last year – eventual shareholder distributions were set almost at the initially indicated upper limits:

HSBI was formed in Sep’19 as a result of a triangular merger of 3 Georgian community banks.

HSBI serves as a holding company for Heritage Southeast Bank, which operates under the names of Heritage Bank, Providence Bank, and The Heritage Bank in its various markets. HSBI has $1.5bn assets ($1.3bn deposits) and operates 22 branches in Georgia. 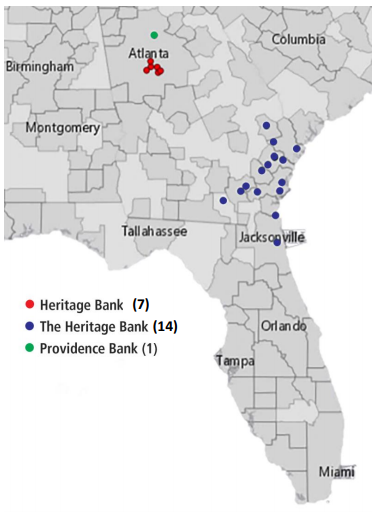 Historical financial performance of the most recent quarters (earlier financials are not that relevant due to the merger in Sep’19): 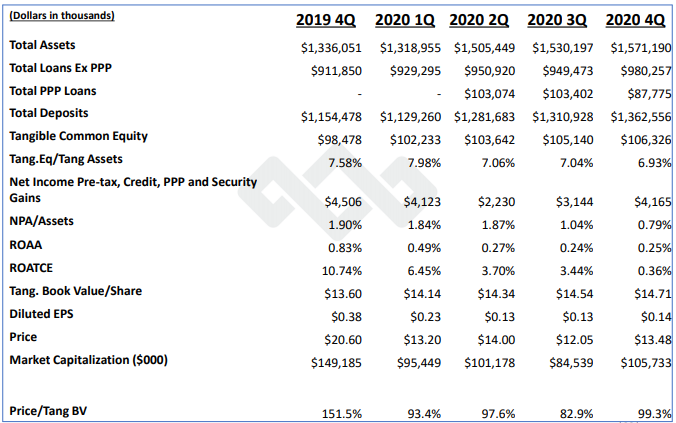 The last 2 years reflect poorly on the company’s financial performance due to the triangular merger costs in 2019 (recognized in Q3, while Q4’19 results were quite good). In 2020 HSBI was impacted by the COVID-19 outbreak (in Q2 17% of the portfolio was granted deferrals), management changes, legacy problem assets cleaning, etc. However, in Q4’20 94% of the deferred loans returned to original terms and pre-tax core earnings almost recovered to pre-COVID levels. The company has written off some of if its legacy problem assets and the CEO noted earnings recovery expectations in 2021 (PR):

The fourth quarter reflected continued traction in the consolidation of our bank operations and clean up in our legacy portfolio. We believe the actions taken in the fourth quarter, including restructuring expenses and moving non-performing assets off the books, will translate to better earnings in 2021.