The idea is a capital structure arbitrage, when the same assets are trading at a different price – and in this particular case it is Liberty TripAdvisor (LTRPA). The play here is to go long LTRPA (a vehicle that owns TRIP shares) and to short TripAdvisor (TRIP) for nearly 50% profit or more. Recent recapitalization transaction partially eliminated the reasons why the spread appeared in the first place and cleared the path towards return to historical trading levels where for most of the time the market priced LTRPA above its NAV due to trip control premium.

Great write-up on TRIP/LTRPA has been published on Sumzero (this idea is under the paywall), but with a slightly different twist – the idea was to buy LTRPA as a cheaper alternative for TRIP as a re-opening trade. But since TRIP has rebounded above its pre-covid levels, and the discount between LTRPA/TRIP widened significantly it is much less risky now to place a fully hedged trade and play for discount elimination.

I would rather not go into details on John Malone and his stellar track record and jump straight into one of his companies in the Liberty empire.

In August 2014, Liberty Interactive announced a spin-off of its TRIP ownership into a publically listed tracking stock with a ticker LTRPA (Liberty TripAdvisor). LTRPA is basically a tracking stock to TRIP and currently owns c.29m share worth c.$1.5bn.

TRIP background is not needed here as in my proposed trade you don’t have to believe in its prospects. It is just worth mentioning that the COVID recovery thesis in TRIP has already played out and the company trades at a level higher than pre-pandemic (see graph below). Therefore, I would suggest a fully hedged trade. 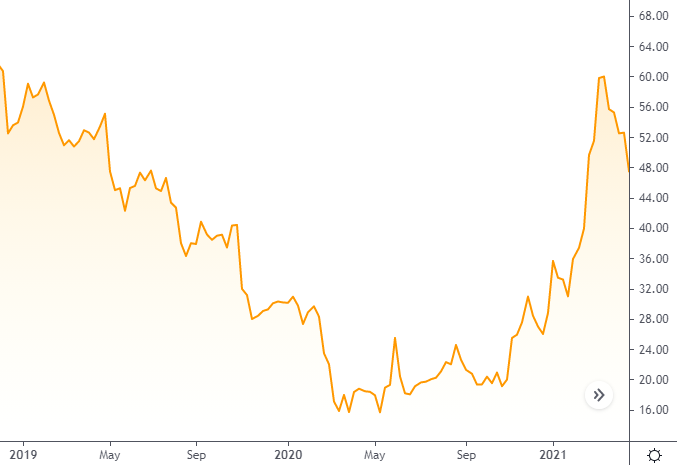 At the peak of the Covid crisis on March 16, 2020, LTRPA announced an agreement with Certares that it will purchase preferred redeemable shares in the amount of $325m with an 8% coupon paid either by cash or by TRIP shares. LTRPA required that money to pay down the margin loan it had against TRIP shares.

The catch with the redeemable shares was that their value was adjusted by the accretion factor linked to the growth of TRIP shares. The ratio calculated as 80% of the growth of TRIP shares above $17.08. Thanks to the swift recovery, accretion factor grew from 1.0 to 2.66 (at the current spot price) and caused the value of these prefereds to grow from the nominal $325m to almost $1bn. Moreover, Certares had a right to put its preferred shares to LTRPA in one year after the transaction closed.

LTRPA started trading at a massive discount to NAV only once the Covid crisis hit and the company had to add this expensive leverage to its balance sheet. Some discount to NAV might be warranted due to this incremental leverage on the balance sheet of LTRPA, but not to the extent seen since the beginning of 2020. Keep in mind that the discount in the chart below is based on LTRPA (and not LTRPB) price and already accounts for the accretion factor – i.e. NAV is calculated by deducting the full market value of the preferred shares on particular dates.

On the 22nd of March, LTRPA in its press release stated that it will repurchase up to $300m worth of preferred shares issued to Certares. The valuation of the Certares shares will be determined based on the $1000 nominal amount per share multiplied by an accretion factor. At the date of the transaction the accretion factor resulted in 2.7x – definitely a home run for Certares. The sources of repurchase – senior debentures at 0.5% 2051 exchangeable for TRIP shares at a premium for c. $280m and TRIP shares for the amount of $90m.

In the Repurchase Agreement, Certares has (1) agreed to permanently waive the right to redeem Preferred Shares prior to the mandatory redemption date, (2) granted Liberty TripAdvisor the option to repurchase all or a portion of the remaining Preferred Shares on or after March 27, 2024, and (3) agreed to hold the Tripadvisor shares for a period of at least six months. Additionally, Certares withdrew its director from BoD. The remaining preferred shares owned by Certares will continue to be adjusted on the accretion factor, which works in both ways, i.e. if TRIP shares decline the outstanding value of preferred shares will decline as well.

On April 6, LTRPA issued another press release stating that it sold an additional $30 million aggregate principal amount of its 0.50% exchangeable senior debentures due 2051.

Overall, Liberty TripAdvisor has repurchased a total of 137,586 Preferred Shares under the Repurchase Agreement in private transactions, representing 42% of the Preferred Shares originally held by Certares, for an aggregate value of approximately $373 million. Payment by Liberty TripAdvisor to Certares in connection with the Certares Transaction consisted of a combination of approximately $281 million in cash from a portion of the net proceeds from the previously announced offering of the Debentures; and approximately $92 million aggregate value of TRIP, consisting of 1,713,859 shares. 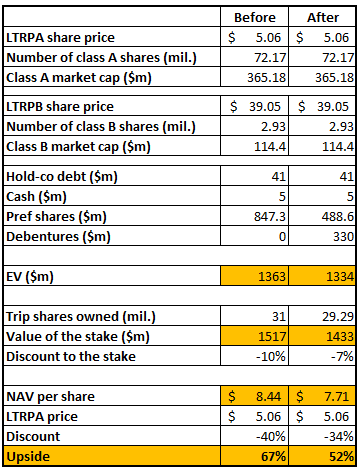 Certares still owns more than 50% of the initial stake of preferred shares, which it will redeem either at the discretion of LTRPA any time prior to or at March 2024. To pay out Certares in full LTRPA will be required to sell some of its shares in TRIP. While such redemption by itself may not result in the closure of the discount, it should definitely accelerate negotiations between LTRPA and TRIP as TRIP would not like to find itself in a position when LTRPA will be bought out by the third party at a discount to TRIP share price.

After the recent Certares transaction, LTRPA has stabilized its situation by agreeing with Certares to waive its put right. At the same time LTRPA became an interesting target for anyone interested in taking over TRIP control. As LTRPA is no longer under pressure from Certares, it has some leverage in potential negotiations with other interested parties (Booking.com, Trivago, TRIP) and may call Certares shares if the future buyer would like to streamline the capital structure of the company.

Why the situation exists