Our tracking portfolio generated 6% return during the month and 32% year-to-date. A detailed performance breakdown is provided below.

We have posted 13 new special situation ideas and one previously closed case became actionable again. A total of 9 ideas were closed during the month – the key highlight was TNK merger with +113% return in 4 months.

Tracking portfolio (+6% MoM) was most positively impacted by the performance of TNK.AX, VHI, and ABCP ideas.

The graph below details the individual MoM performance of all ideas that were active during the month. This chart excludes quick ideas. 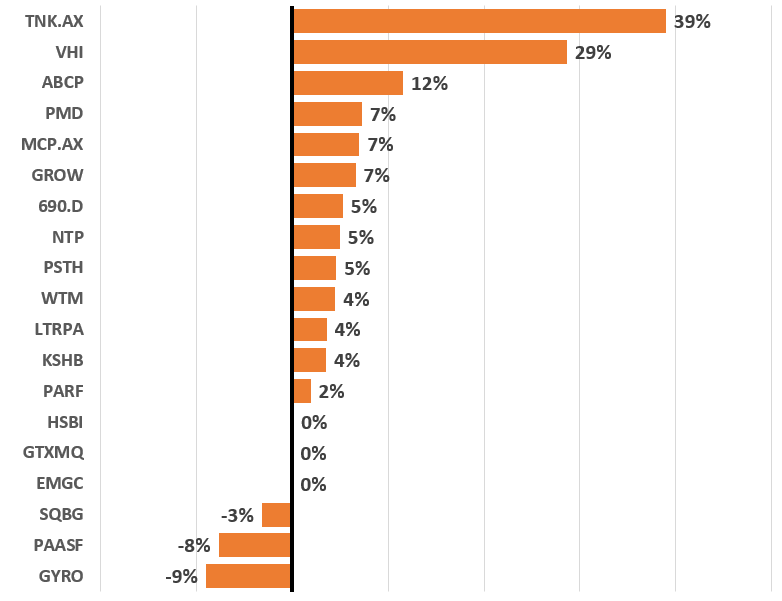 Think Childcare (TNK.AX) +113% In 4 Months
This was a prime example of a merger arbitrage situation where fundamentals strongly supported an upcoming offer increase. Australian childcare services provider Think Childcare was being targeted by two bidders – financial (Alceon) and strategic (Busy Bees). Initially, Alceon’s A$1.35/share offer got outbid by Busy Bees A$1.75/share proposal. Multiple aspects including strong strategic rationale and opportunistic timing indicated that Busy Bees is unlikely to walk away. Moreover, higher a comparison with peer valuations and rebound in TNK’s financial performance strongly suggested that the buyers are likely to continue bidding up the price. Eventually, Alceon upped its offer to the same A$1.75, while Busy Bees stepped up to A$2.10/share. Shortly after, TNK released very positive annual results and Busy Bees increased the offer one more time to $3.10/share. The idea generated 113% in 4 months.

McPherson’s (MCP.AX) +7% In Half A Month
After lackluster H1 FY21 results, Australian consumer beauty / personal care product marketer McPherson’s received a hostile takeover offer from a private equity investor Kin Group at A$1.34/share. The offer was opportunistic and was swiftly rejected by management and two major shareholders (combined 10%). The expected recovery in MCP business increased the chances of a higher bid. A few weeks later, another suitor, Australian pharma company Arrotex, made a competing non-binding A$1.60/share offer and was granted due diligence. However, at the same time, MCP released a rather disappointing financial guidance eliminating the prospects of a quick recovery. The remaining 4.5% spread seemed not worth the risk and we closed the idea with a 7% gain in two weeks.

Garret Motion (GTXMQ) -2% In 3 Months
Garret Motion (manufacturer of turbochargers) was at the final stages of its voluntary bankruptcy and had already chosen an auction winner – COH Group. The proposed restructuring seemed to be geared to enrich the controlling shareholders at the expense of the minority owners and was strongly opposed by the equity committee. The committee was pushing its own restructuring plan which offered a higher cash-out option ($7/share vs COH’s $6.25/share). The claims of the equity committee claims seemed valid and had a decent chance of standing up in court. Given the protected downside (COH’s offer), the situation presented a nearly risk-free option that the equity committee’s proposal will prevail. However, the eventually signed settlement agreement did not increase the cashout option, instead, minority shareholders were allowed to participate in the offering of the convertible preferred shares that the controlling shareholders were subscribing en masse. The idea was closed with $6.25/share cash-out option and resulted in 2% loss in 3 months.

Plateau Energy Metals (PLU.V) +19% In Two Months
Exploration-stage lithium miner Plateau Energy Metals was getting acquired by its peer American Lithium. Consideration stood at 0.29 LI units per PLU share. Each unit was comprised of 1 LI common share and 0.5 warrants. Shareholder approval seemed likely given the strategic reasons and recent tailwinds in the lithium sector. Eventually, the spread narrowed down to 2% and we closed the idea with 19% profit in two months.

Equiniti (EQN.L) +15.5% In Two Months
In Feb’21 rumors spread out that registry services provider Equiniti received takeover interest from a tech-focused PE firm Siris Capital at £1.70/share. The report stated that Siris had already tried to approach EQN several more times last year. Apparently, one large shareholder viewed the offer price as insufficient for EQN to engage. Overall, the situation was speculative, however, multiple aspects indicated favorable development going forwards. Eventually, the rumors came true and Siris itself has formally announced the offer, as a result of which the spread narrowed considerably. Nonetheless, it seemed that the board is unwilling to engage, while the prospects of increased offer seemed somewhat dubious. We chose to take the safe path and closed the idea with 15.5% profit in 2 months.

Bingo Industries (BIN.AX) +5% In One Week
Australian waste management company received non-binding acquisition proposal at A$3.50/share from two large PE firms – Macquarie Infrastructure and Real Assets and CPE Capital. Several aspects indicated that a firm offer should materialize soon – especially recent rumors that the buyers have finished the due diligence and are nearing on finalizing the acquisition. As expected, a firm offer was announced shortly. Given a minor remaining spread, we have closed the idea with 5% gain in one week.

CRA International (CRAI) +$400 In One Month
Consulting services firm CRA International (CRAI) announced a tender offer to repurchase $25m (4.5%) of outstanding shares at $66.25 – $76.00/share. Given the size of the tender, oversubscription seemed likely, however, odd-lot shareholders were exempt from proration. 79.4% of the tendered shares were accepted at $74/share price. Odd-lot shareholders generated $400 profit in one month.

CCUR Holdings (CCUR) +$240 In One Month
CCUR Holdings was going private via a 1 for 3000 reverse stock split transaction. Odd-lot provision was included. There was some risk of transaction termination. However, due to relatively limited upside (only 3% or $240 for odd-lots) and low visibility in the media/forums, it seemed quite unlikely that the transaction would get canceled because of too many odd-lot arbitrageurs. Given the cash-out price at a discount to cash, management seemed well incentivize to proceed. The reverse split closed as expected generating $240 profit (for odd-lots) in 1 month.

Zenabis (ZENA.TO) – Merger Arbitrage +8% In 2 Months
Canadian cannabis products operator Zenabis announced that it will be acquired by its larger peer Hexo. Consideration stood at 0.01772 HEXO shares per each Zenabis share (total value around C$200m). This was a strategic merger based on the recent industry tailwinds. The buyer had carried out similar size mergers before. Shareholder meeting date was set for the 13th of May. 12% spread is still outstanding, however, as the borrow costs skyrocketed from 10% to 240% over the last few days, we were forced to close this idea. The trade resulted in 12% return before fees and 8% after borrow fees in 2 months.