During March 2021 we’ve posted 11 new ideas. 3 previously closed cases became actionable again. 9 ideas were closed with highlights being PLMR with +40% return in 1.5 months and MMMB with +47% return in one month.

Our tracking portfolio returned -1.5% during the month.

Below you will find a detailed breakdown of tracking portfolio returns as well as descriptions of all closed cases.

March 2021 returns (-1.5% in total) were negatively affected mainly by the losses one the speculative APT case (-26%) and volatility of ABCP share price (-21% the thesis remains unchanged). The strongest performers of the month were PLMR and VHI.

The graph below details the individual monthly performance of all the active/closed cases (excluding Quick Ideas) during March. 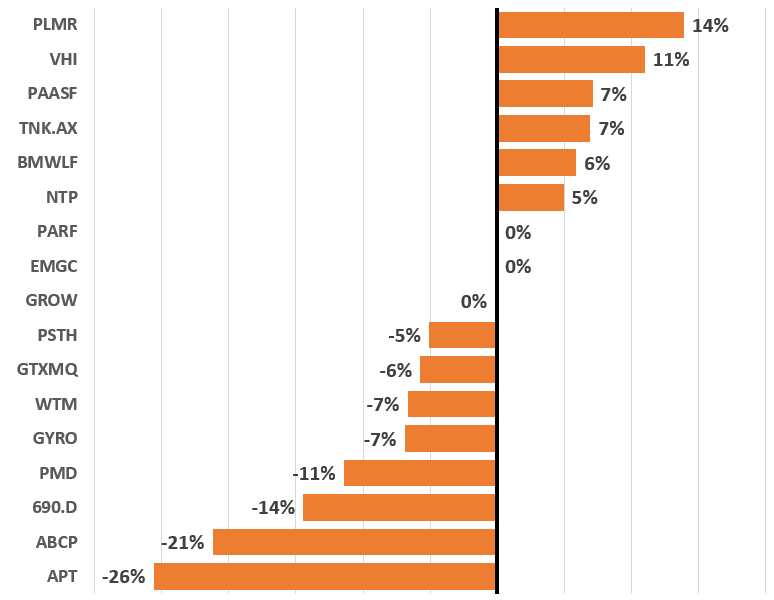 Palomar Holdings (PLMR) +40% In 1.5 Months
PLMR was an extremely overvalued insurer, trading at all-time-high price of 8x BV / 150x TTM earnings. The company had reported significant (almost equal to the net premiums earned) catastrophe losses in Q3’20. These results were followed by a strong sell-off in shares (-30%). Estimated cat. losses for Q4 were also very sizeable (around 40% of the usual net earned premium per quarter), so it seemed likely that Q4 results announcement would trigger a similar sell-off. On top of that, expected slow down in growth, increased reinsurance cost, and warning from SEC to stop using highly promotional valuation metrics, seemed likely to finally crumble management’s growth story and return PLMR share price back to earth. The thesis played out nicely and Q4 results came out even worse than expected. PLMR entered into a downtrend and is continuing to fall. Recently management has announced a symbolic 2% stock buyback to stop the free-fall. The idea generated 40% return in 1.5 months.

Bluma Wellness (BWEL-U) +13% In 1.5 Months
Small Florida retail cannabis player Bluma Wellness was subject to an acquisition by a major multi-state cannabis operator Cresco Labs. This seemed to be a pure land grab for Cresco to secure a position in Florida (3rd largest US state) given the increased chance of Federal level legalization later on this year. The price seemed fair and 40% of Bluma shareholders were already supporting the merger. Due to the small size, regulatory approval did not seem to be an issue. Some risk of merger cancellation remained due to a previous Cresco’s track record of terminated transactions, however, given the completely different market environment, positive tailwinds, and strong strategic rationale, termination seemed unlikely this time. Eventually, approvals from shareholders and court were received and the spread was eliminated. The idea was closed with 13% gain in 1.5 months.

Alpha Pro Tech (APT) -30% In 1.5 Months
This was a very speculative/risky case – not one of the usual SSI ideas. It seemed, that after the first wave of short squeezes ($GME, $AMC, $BBC, etc.) subsided, Reddit/WSB crowd will start looking for the next names with high short interest to squeeze. Alpha Pro Tech seemed like a decent candidate due to its limited float (35% on a $200m market cap), 25% short interest rate, recently increased trading volume as well as the impression of being cheap due to a couple of quarters of COVID driven growth. Despite the initial 36% spike in the share price, APT did not manage to get enough attention from Redditors/WSB and the share price retreated back down. Q4 results also didn’t live up to the expectations, pressing the stock further. The idea was closed with 30% loss in 1.5 months.

Mama Mancini (MMMB) +47% In One Month
Mama Mancini, a fast-growing higher-quality packaged foods producer announced an uplisting to Nasdaq. Several recent examples showed a potential for a price jump following the increased visibility and improved trading volume from uplisting. 50%+ shares were held by the management. Downside seemed well protected by strong fundamentals and steep discount to a similar size, slower-growing peer. Although the uplisting itself is still pending, during the last month MMMB share price appreciated by 47% and company’s valuation is now in line with its peer. Given remaining uncertainty regarding further revenue growth and uplisting, we decided to close the idea with 47% return in one month.

Arrow Global (ARW.L) +14% In One Month
European distressed debt purchaser Arrow Global received strong takeover interest from PE firm TDR Capital. The buyer made a number of consecutive indicative proposals, with the latest (4th) at £3.05/share. ARW founder and chief investment officer agreed to support the latest offer, which indicated a strong likelihood of the board agreeing to enter into discussions. Buyer’s credibility and opportunistic timing reassured of firm TDR Capital’s intentions. Eventually, the buyer increased the price for the 5th time to £3.075/share, and a binding agreement was signed. The spread was eliminated generating 14% profit in 1 month.

Hunters Property (HUNT.L) +20% In 1.5 Month
The Property Franchise Group was acquiring Hunters Property (HUNT.L) for 0.1655 TPFG shares + £0.432 in cash. Additionally, HUNT shareholders had to receive a special dividend of £0.027/share shortly before the closing. Hedging was unavailable, however, it seemed that the existing spread (16%) and recovery of the property market in the UK provided a sufficient margin of safety. Strategic rationale seemed sound. HUNT shareholder’s vote was guaranteed and 32% of TPFG shareholders were also supporting the merger. Eventually, the merger was closed and this unhedged arbitrage resulted in an even higher than expected upside (20% in 1.5 months) due to TPFG price appreciation.

Gridsum Holdings (GSUM) +7% In 5 Months
Chinese data analytics firm GSUM entered into a definitive agreement to be taken private at $2/share (excluding the fees, consideration stood $1.95/share) by its management and other consortium members. Shareholder approval was guaranteed by management’s 68% control. The company was on a brink of bankruptcy, so management was highly incentivized to proceed with the transaction. A very high success chance among US-listed Chinese firm privatizations that had already signed definitive agreements (as was the case for GSUM) indicated that the merger was statistically likely to close. As expected, the transaction was completed generating a 7% return in 5 months.

Idox (IDOX.L) -15% In 2 Weeks
UK’s software solutions company Idox received 3 takeover offers from its larger peer Dye & Durham, with the latest one at £0.75/share. Several factors including strong strategic rationale, buyer’s long track record of acquisitions, multiple consecutive offers already made for Idox as well as seemingly fair price suggested that a firm offer is imminent. Nonetheless, for undisclosed reasons, Dye & Durham decided not to proceed with a firm offer. Idox share price declined to pre-announcement levels resulting in a 15% loss in 2 weeks.