SPAC is an acronym, short for “special purpose acquisition company”, which became extremely popular recently due to a record-breaking number of companies choosing to go public via SPAC.

A SPAC is a shell company with no operations, created in order to buy another company. So essentially, SPAC could be explained as a “bag of cash that exists for a purpose of a merger”. For private companies, SPAC is just an alternative way of going public. The whole procedure is this – SPAC raises cash through its IPO, identifies a target and then merges with it. In this way the previously private company (i.e. the target) gets a public listing without having to go through the burdensome IPO procedures. SPAC founders/sponsors in turn receive a sweet compensation for their efforts – a significant equity ownership in the merged company without investing any capital.

The more detailed structure of events would be:

Here’s a usual timeline for SPACs:

So the whole life cycle of a SPAC generally lasts for two years – that’s the amount of time it has from the IPO until completion of the merger (some small extensions are possible). A target company must be found in 19 months at most, because there must still be sufficient time left to finalise and close the merger. For an average SPAC, it takes about 4.5 months from finding a target and closing the transaction. The average time from a SPAC IPO to the actual closing of the merger is 15.5 months.

SPACs are actually not something new. They’ve existed since around 1980’s, however, until recently they had been regarded as somewhat shady blank check companies. Before 2000’s SPACs were mostly pump and dump schemes and scams, but then with the law changes they’ve became more of an additional way of going public. Nonetheless, at the time most investors were still very sceptical of SPACs, mainly because of SPACs poor performance after the merger, significant dilution as well as obvious conflicts of interest – the sponsor is mostly interested in getting the deal past shareholder vote and not in the actual value that the initial SPAC investors receive.

So the general opinion among investors used to be that SPACs are even worth looking into – if the company is not good enough to do an IPO and chooses SPAC, most likely its crap. Most of the time this was exactly the case. Several various studies (The Wall Street Journal, Financial Times) showed that most SPACs eventually fall significantly below their IPO price ($10/share) and most SPAC investors were badly losing money. 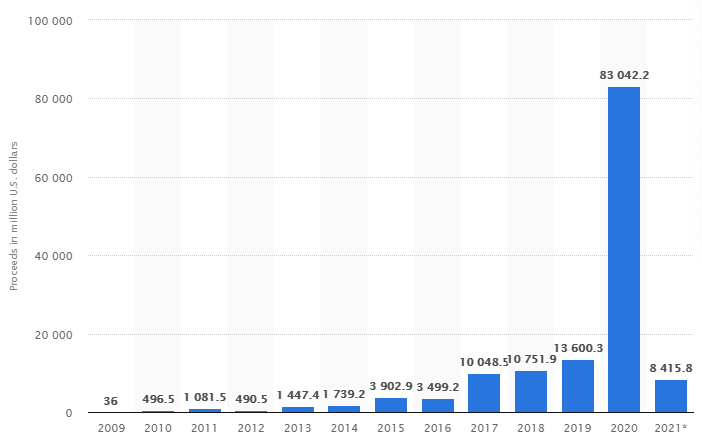 Why did SPACs become popular recently?

Investing in SPACs is actually quite easy – you can buy it in the open market like any other security. One just needs to open an account with a broker (IB, Fidelity, Schwab, etc.) and once you’ve got that, you can acquire any stock that is available with your broker.

There are a couple more points you should know:

How to invest in SPACs?

First of all, there is a difference in whether you plan on investing in a pre-announcement SPAC or after the target has been already announced, or maybe even after the merger has been already announced. The biggest distinction is uncertainty. Pre-announcement SPAC is basically just a bag of cash and you don’t know what it will be piled into yet. The most important aspects to look for in his case are the management and the industry it targets. Management/sponsor or the people behind the company might give you a good indication on the potential outcome of your investment. If they have a good track record of creating value for shareholders (e.g. John Malone and Greg Maffei) or, for example, the sponsor is a very well-known and credible company/investment fund, it definitely increases the chances of things running smoothly in the future. Watching for PIPE investments is also important as prominent investors (e.g. Bill Ackman) adds substantial credibility or even hype for the company. For example, after several very successful SPAC mergers (Virgin Galactic, Opendoor Technologies) venture capitalist’s Chamath Palihapitiya’s name now seems to add significant premium to every other of his new SPACs.The industry is also quite important as recently certain industries, particularly electrical vehicle and artificial intelligence seem to receive more love from investors (especially retail). Attractive industry results in an attractive story and story nowadays seems to be the most important thing for SPACs. So if a SPAC is targeting lets say EV industry and manages to find a target there, there’s a good chance that the stock will fly. In contrast, industries like insurance, food & beverage, brick & mortar retailing, education (non-online) are not so hot and might even result in a price fall after the merger announcement, as investors decide that the company is no longer attractive and exit. All these things are important to consider to make a more compelling pre-deal SPAC investment.

After the merger has been already announced, the focus should naturally turn towards the target company. All the needed details on the target are included in the S-4 filing, which you can find on the SEC website. It is important to thoroughly review the target company’s fundamentals, understand the industry situation and comparison with peers. It involves valuation work, but it’s needed so that you can see the whole picture and where that particular company could fit into after the merger gets completed. So at that point, it’s all a case by case scenario. Worth noting, that nowadays the importance of fundamentals is decreasing as with the influx of retail investors (Robinhood/reddit guys) the market seems to care more about a good story (e.g. NKLA), hype and future promises. So predicting/following the hype could be a short-term investment strategy as well, however, it’s very risky and if the hype suddenly turns (negative news/rumours are announced, etc.) you could get burned pretty badly.

After the merger is already completed, the combined company becomes a “normal” public company and as various risks that were present before the merger (shareholders vote, transaction termination) no longer apply. At this point, investing into a post-deal company is hardly different from investing into any other public company. Many things mentioned in the paragraph above still apply (fundamentals). Although, it’s important to note that for some time after the merger share price volatility could be greatly enhanced and it’s not rare for the stock to skyrocket as the market becomes excited that the company is finally listed (NKLA, SPCE, OPEN). It’s important to watch out for these bubbles as getting in at the wrong time (peak of a temporary jump), could bring very negative results afterwards.

Besides the more traditional investment approach, you could also look for more of a special situation type of plays as SPACs offer plenty of them. For example, potential warrant or option arbitrage trades, various warrant exchanges and so on. Warrant/capital structure arbitrage plays are particularly present in post-deal SPAC companies and are very lucrative. Recently we’ve closed several such trades – $METX (generated +175% in a month), $ATCX, $NKLA.