This merger arbitrage situation involves the takeover of lithium mining project listed in the UK. It involves a fair share of political/regulatory risk, hence the large spread. There are some interesting arguments suggesting that the market might be overestimating the regulatory risk.

On the 6th of May, Bacanora Lithium has announced a non-binding offer by its largest shareholder and world’s largest lithium producer Ganfeng International Trading (US$24bn market cap). Consideration stands at £0.675/share in cash. Ganfeng owns 29% of BCN and is definitely a serious and credible buyer. PUSU date to announce a firm offer is set for the 3rd of June. Scheme mergers in the UK require approval from a majority of shareholders in number and 75% of the votes cast in favor.

The main caveat and major reason for the spread seems to be risk of UK regulators derailing the transaction. Apparently, the British are concerned that their transition to renewable energy and EV could be impeded by Chinese control over the relevant minerals (cobalt, lithium). The government has recently released a bill updating its National Security and Investment Act and strengthening the foreign investment regulator’s powers to scrutinize, impose conditions or block transactions, which it considers to be threatening to the national security. Reportedly, certain politicians (e.g. former leader of the conservative party) are urging ministers to block the transaction:

There cannot be a better candidate for the first ministerial call-in under the new legislation than this deeply worrying acquisition that risks handing control over a critical resource of the future to a genocidal state.

The government is currently examining the creation of a national stockpile of rare metals.

Moreover, it has been reported that certain retail shareholders, which own a combined 5% of BCN are also opposing the takeover and are urging regulators to block it.

This regulatory risk is difficult to handicap, however, there are several points worth considering:

The company owns 50% of Sonora Lithium project in Mexico, the other 50% is owned Ganfeng (the buyer of BCN). A feasibility study has already been finished, while financing for the construction has been secured. The company expects to start stage 1 construction in 2021 and start producing battery-grade lihtium products in 2023.

The company also owns a number other minor mining assets and has 44% stake in Zinnwald Platinum, which owns 50% in Zinnwald Lithium Project (Czech Republic). 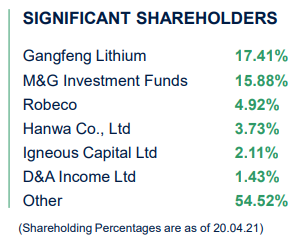