Box is one of the key players in the enterprise cloud content management market with an interesting setup – a large recent investment from KKR at higher prices, serious involvement of a prominent activist Starboard, and management incentivized to please shareholders before the potential proxy fight. Most importantly, management promised tender offer for about 15% of the outstanding shares and this tender will likely be done at a premium to current levels (pricing has not yet been announced).

On the 8th of April, Box released results of the strategic review – management decided to continue along the same path as before and revealed a $500m investment from KKR. KKR will receive preferred stock with 3% yield and convertible into common at $27/share – or 30% spread to current prices. Box will use the proceeds to launch a dutch tender offer:

Box anticipates using substantially all of the proceeds to fund a share repurchase through a “Dutch auction” self-tender of up to $500 million of its common stock, with specific amount and pricing of the self-tender to be determined based on market conditions and stock prices at the time when the self-tender is launched. The self-tender is expected to commence after Box releases its fiscal first quarter financial results in May 2021

Q1 earnings are scheduled for the 27th of May – tender price range should be announced within a few weeks and I believe that it’s likely to be above the current levels.

For 1.5 years now the management has been pressured by Starboard Value to increase its financial discipline. Some changes were made – the board was refreshed, one of the founders/CFO even gave up his seat, and the financial results have somewhat improved.

In March’21, rumors appeared that Box is exploring a sale amid pressure from Starboard. Share price went up from $18.50/share to $25/share. However, strategic review results and KKR investment revealed that the sale is no longer in the cards anymore and the board concluded that “partnership with KKR, along with the repurchase of shares, will best position the company to deliver value to Box stockholders in both the near- and long-term”. Box share price declined upon this announcement and currently is 16% below the March levels.

Recently, Starboard announced that due to poor company performance it will nominate its slate of directors for the upcoming shareholder meeting. The deadline for the nomination is the 11th of May. The board definitely feels threatened by the activist, and given the potential proxy fight should be strongly incentivized to please the shareholders with the upcoming tender offer. As criticized by Starboard:

Taking all of this into account, the board is now obligated to play it well and show that they “can” create value (i.e. buy the vote). Thus, it’s likely that the upcoming tender will come at a nice premium.

KKR involvement also adds confidence here as, given the rather low 3% yield of the preferreds, it’s $500m investment was clearly driven by the conversion option, signaling that KKR believes equity is worth much more than $27/share.

Finally, the company is slightly undervalued relative to its major peer (Dropbox) – revenue multiple 4.1x  vs 4.9x for DBX, and has room to significantly increase its operating leverage, which is likely the main thing that attracted Starboard and KKR.

Starboard is a hedge fund that doesn’t need much introduction as it is considered to be the king of US activists (here and here), with numerous successful campaigns over the years (the most prominent being Papa John’s).

The activist has until the 11th of May to make its nominations.

Box is one of the major content cloud platform providers with 67% of Fortune 500 companies as its clients. The company IPO’ed in 2015 at $14/share. CEO and CFO are the company’s founders.

More background on the company can be found in VIC articles here and here.

Box was one of the first multi-billion SaaS, which over the years transitioned its focus from file sync and share to enterprise content management. The other 3 major players in the space are Microsoft, Google, and Dropbox. Box and Microsoft are focusing more on large businesses, while Google and Dropbox – on SME and consumers.

The company is struggling with the competition and over the years saw its revenue growth decline from 30%+ to 11%. One of the key criticisms the company receives is poor financial discipline and highly elevated opex, which keeps it from reaching breakeven and generating meaningful cash flows. High stock-based compensation (around $150m – 30% of gross profit) adds further negative sentiment. 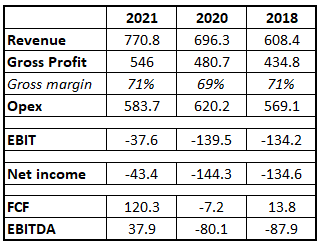 However, simple revenue multiples valuation does not reflect the attractiveness of BOX. Long-term investment thesis (and likely why it attracted Starboard and KKR) lies in company’s potential to increase operating leverage by better managing opex and compensation. As explained by Starboard:

From the outset, we have been clear that in order for value to be created, Box needed to significantly improve both growth and profitability, as well as meaningfully lower its equity compensation expense and improve capital allocation […]

There is no good reason that Box should be unable to deliver improved growth and profitability, at least inline with better performing software companies, which, in turn, would create significant shareholder value.

A similar case could also be made for DBX, which also struggles with profitability and high equity compensation ($261m), however, DBX is well-protected from the activists due to its voting share structure.

In its response to Starboard’s letter, management has presented new guidance indicating revenue growth rate of 12%-16% with operating margins between 23%-27% by fiscal 2024. If these targets are reached, the company would become a cash flow machine. The targets look kind of achievable and may even be too conservative – in comparison, Box closest (albeit much much larger) enterprise peer Microsoft runs its Intelligent Cloud segment with 37% operating margins.