This idea was shared by Tom.

This is a non-standard merger arbitrage in the cannabis industry with a large spread to the current (mostly cash) offer and a solid chance of a competing bid.

On the 5th of May, Canadian cannabis retailer and franchisor Inner Spirit Holdings announced a merger with Sundial Growers. Consideration stands at C$0.30 in cash + 0.0835 SNDL shares per ISH share. The merger is subject to approval by 2/3rds of ISH shareholders and the meeting is expected to take place in July. ISH directors and certain shareholders with a combined ownership of 30% will support the transaction. Closing is expected in early Q3 2021.

Timing till closure is relatively short, the offer is 3/4 cash and there is plenty of cheap borrow for hedging the share portion of the consideration. ISH offers a unique asset – the very first and fast growing cannabis retail franchise in Canada. This might attract the attention of other industry players – the merger announcement press release reads like a straightforward invitation to make a better offer for the company.

Downside to pre-announcement levels stands at 25%. It is not clear if IB allows buying ISH stock, but other brokers, especially Canadian ones should offer this option.

The press release of the transaction was non-standard and definitely added an interesting angle to the whole case. The language and certain provisions clearly indicate that ISH is inviting and expecting competing bidders to emerge. For example, in contrast to 99% of similar takeovers, this press release stated that ISH and SNDL business models are not directly complementary and will not result in material synergies:

The Transaction is expected to provide modest synergies and economies of scale due to the different business models of Sundial and Inner Spirit.

Additionally, it included a “fiduciary duty” provision allowing ISH to accept competing proposals with SNDL having a 5 day right to match:

The Agreement provides for, among other things, customary support and non-solicitation covenants from Inner Spirit, including customary “fiduciary out” provisions that allow Inner Spirit to accept a superior proposal in certain circumstances and a five-business day “right to match period” in favour of Sundial.

The termination fee is C$4m, which is also on the low range (3% of the total consideration) adding further support for the argument.

The buyer is highly incentivized to close the deal

Sundial is a Canadian cannabis cultivator, which over the years moved from wholesale to selling its own brands. To put it mildly, the company has not been very successful and is currently in a tough position, despite having a very strong balance sheet. It has IPO’ed in August’19 at $13/share and had a fairly bad run since then due to the Canadian cannabis crisis, high cash burn, COVID-19 outbreak, etc. The company launched its own 5 brands aiming at all price categories, however, the topline growth was hardly affected – net revenue declined by -4% in 2020 and -30% in Q1’21. This year, however, proved to be lucky and the company became a target of Redditors/WSB community, which during its cannabis stocks pump, trampolined SNDL share price from $0.60/share to over $3/share. The management smartly used this opportunity to conduct a couple of secondary offerings and raised nearly $1bn in cash (had $907m as of Q1’21). At the moment SNDL has no debt, a load of cash, incredibly diluted shareholders (Q2’19 0 75m shares, Q1’21 – 1675m shares), and a stagnating business pressured by competition and industry consolidation. Clearly, the management should be incentivized to turn around the business by deploying the newly raised cash and bringing back growth. The plan is to do that through M&A and equity investments. From the recent Q1 call:

While we have made several significant strategic investments this past quarter, we continue to see a robust pipeline of additional investment and M&A opportunities […] Look, I think the strategy on capital deployment is very much in line with our commentary from last quarter. We do see, in Canada, consolidation on its way, in a material manner. We are looking at opportunities in the space from, really, two main perspectives. One, in terms of classic M&A where we can consolidate or be a consolidator, take certain costs out of a structure and position ourselves well in the Canadian market.

ISH seems like a very nice candidate for their first purchase, given its very rapid growth and successful franchise retail network in Canada. The fact that SNDL agreed to the above-stated provisions in the press release and are paying most of the consideration (C$100m part) in cash suggests that they really want to close this merger.

Despite stating only “modest” synergies in the press release, it seems that the actual synergies here could be quite material. ISH has a pretty unique business model – it is the largest single-brand retailer with a network of locations in Canada (100+ stores expected in summer). The majority of the stores are franchised locations and the store count is growing at a fast pace. I guess, there’s no need to say that SNDL being a cannabis cultivator with its own 5 brands could draw very significant synergies with ISH assets, or to add some speculation, could even expand the already successful franchise model to the US market. There was a question regarding that during the Q1’21 call and, in my eyes, the way it was rebuked only confirms this:

Tamy Chen:
Thanks. Good morning everyone.
First, wanted to ask if you could explain a bit more on the rationale for the acquisition of the Inner Spirit franchise and some corporate stores? Is it to have your Marketing team better engaged with this network of stores to increase penetration of Sundial products? Just if you could elaborate a bit more on the thinking of why acquiring into retail.

Zachary George:
Hi, Tamy, good morning, thanks for the question.

Unfortunately, we’re going to actually punt on this question for now. We are satisfying a number of conditions to close the transaction, and we’ll be providing a very fulsome update closer to the time of close, which as we said, is early in Q3. We’d be happy to give a much more detailed answer at that time.

Apparently, ISH directors and certain shareholders are supporting the merger with a combined stake of 29.8%. This significantly increases the chance of shareholder approval. The merger also comes at an all-time high price.

A significant portion of ISH shares are held by its suppliers – Auxly and Newstrike (recently acquired by HEXO). The suppliers hold 9.5% of ISH each, for a total of 19% combined stake. This is unlikely to be an issue to the vote, as apparently, Auxly has agreed to vote in favor – it has an independent director on ISH board and the board has accepted SNDL proposal unanimously. It is not clear if HEXO would be equally supportive as SNDL would likely takeover as a supplier for Spiritleaf stores.

ISH is the largest single-brand cannabis retailer in Canada, focusing on the franchise of its Spiritleaf retail stores across Canada – the company has 86+ stores with more than 2/3rds being franchised. ISH continues to open new franchised locations and projects to have 100+ stores in the summer of this year. 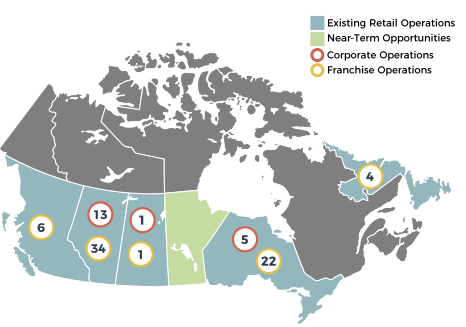 Given the rapid and continued growth, the success of the Springleaf retail franchise concept seems to be clear-cut. The company has recently reached break-even point and ended 2020 with positive cash flow and C$3.3m adj. EBITDA.

SNDL is a Canadian cannabis cultivator. The company also owns 5 brands – Sundial, Grasslands, Palmetto, BC Weed and Top Leaf. Currently Sundial sells and focuses mostly on dried flower, vapes and pre-rolls, however, intends to expand into a wider range of formats such as edibles, oils, capsules, etc.