Our tracking portfolio generated 0.8% return during the month and 33% year-to-date. A detailed performance breakdown is provided below.

We have posted 9 new special situation ideas during this month. A total of 11 ideas were closed during the month – the key highlight was NTP activist proxy fight play with 69% return in 2 months.

The tracking portfolio (+0.8% MoM) was most positively impacted by the performance of NTP, TCI and BOX ideas. Two of them are still active with significant upside remaining.

The strongest negative impact for the tracking portfolio was driven by the crash of SQBG price (-70% in May) – which was/is a very speculative case on a highly leveraged company facing backruptcy risk. Excluding SQBG, the adjusted monthly portfolio return would’ve been +4%.

The graph below details the individual MoM performance of all ideas that were active during the month. This chart excludes Quick Ideas. 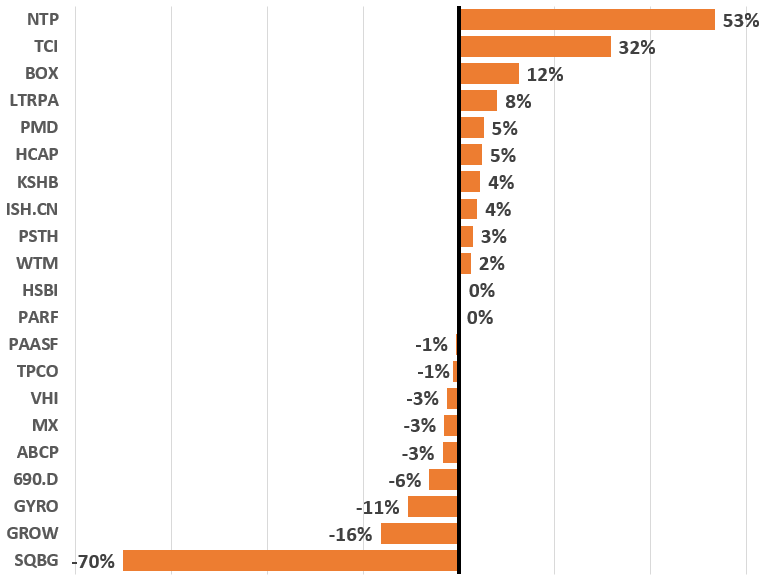 Nam Tai Property (NTP) +69% In 2 Months
Nam Tai Property was a mismanaged real estate developer in China (listed on NYSE), trading at 70%+ discount to the SoTP value of $40/share as highlighted by an involved activist. Activist campaign to oust the entrenched board received support from the Eastern Carribean Supreme Court, significantly increasing the chances of success. The court has voided the board’s dilutive share issuance, which had previously eliminated any chance for the activist to win the needed votes, and ordered to convene shareholder meeting. The meeting got adjourned due to NTP’s court appeal, however, the preliminary voting showed that 97% of unaffiliated shareholders voted in support of the activist and the court was made aware of that. We have closed the idea after the recent share price run-up as it seemed compelling to take substantial profit in face of remaining uncertainties and potentially prolonged timeline. The idea generated 69% return in 2 months.

Psychemedics (PMD) +28% In 3.5 Months
During H2’20 Psychemedics (hair follicle drug screening services) was approached by third parties and started a strategic review. Opportunistic timing and recent involvement of a prominent investor Peter Kamin (6% stake) increased chances of a company sale. The business was also expected to benefit from the upcoming post-pandemic recovery, especially in its major growth market Brazil. Downside was protected by cheap valuation relative to larger peers and historical PMD multiples. However, in three months there have been no further updates on the strategic review and the Brazilian business was not performing as expected (due to pro-longed covid outbreak). It was not clear if the sale of the company was still in the cards. Nonetheless, undervaluation / post-COVID recovery part of the thesis has worked out as expected and the idea was closed with 28% profit in 3.5 months.

White Mountains Insurance (WTM) +11% In 4 Months
White Mountains Insurance was an underfollowed insurance investment holding company with a fantastic track record, a history of large buybacks, and an interesting setup. The company has always traded around its BV, however, a 30% valuation gap appeared after an IPO of one of its holdings – MediaAlpha (MAX). After the IPO, MAX share price skyrocketed, which materially increased the value of WTM’s remaining stake in the company. Gradually WTM share price and its book value converged and the idea was closed with 11% return in 4 months. Hedged positions generated c. 20% return as part of the spread elimination was driven by the decline in MAX share price.

Tribune Publishing (TPCO) -1% In 2 Weeks
Newspaper company Tribune Publishing received a $17.25/share offer from a hedge fund Alden Capital and a competing offer from Stewart Bainum at $18.50/share. Bainum’s offer seemed to be falling apart after his financing partner dropped out of the consortium. However, Bainum remained committed and found buyers for all TPCO newspapers except one. Essentially, this idea was a bet that in less than two weeks (before the shareholder vote on Alden’s offer) Bainum will manage to find the last buyer and revive his $18.50/share proposal. Moreover, reportedly one additional competing buyer was also in the process of raising funds to make a bid for TPCO. Short timeframe and downside protected by Alden’s proposal seemed fairly attractive.  Eventually, no competing offers were made and shareholders approved Alden’s proposal. The idea was closed with 1% loss in 2 weeks.

Emergent Capital (EMGCQ) – Upside TBD
Emergent Capital used to be a hold-co with 27.5% stake in a run-off portfolio of life settlements. The portfolio had 500 policies with the remaining face value of maturities at $2.4bn and the average age of insureds at 85.9 years. EMGC stake in the portfolio had an actuarial fair value of $0.34/share. Assuming actuarial/management estimates had been correct, EMGC was trading at a nearly 40% discount to its intrinsic value. A couple of scenarios on policy maturities suggested value might be as high as $0.70+/share. Management owned 50% of the company and the downside was protected by the hold-co structure. The company was in the process of voluntary restructuring and one of the key concerns was the planned delisting from the U.S. and transfer to Vienna Stock Exchange and questionable trading access and liquidity on the new exchange. As it turned out previous EMGC shareholders are now stuck with ‘unlisted’ securities as there is zero trading on Vienna exchange. The likelihood of a positive outcome – i.e. eventual distributions materially exceeding the initial investment – is still high, but now the situation will take multiple years to play out and minority shareholders have limited means to track the developments.

QUICK IDEAS CLOSED IN MAY 2021

UrbanGold Minerals (UGM.V) +10% In 1.5 Month
UrbanGold Minerals was subject to an acquisition by its peer Troilus Gold at 0.3004 TLG shares per UGM share. The strategic rationale seemed sound – mining assets of both companies are located next to each other – in a way Troilus was effectively expanding its property area by 33%, while diluting its shareholders by only 12%. As expected UGM shareholders approved the transaction and the spread got eliminated. The idea generated 10% return in 1.5 months.

Redflex Holdings (RDF.AX) +9% In 3 Months
Leading US outsourced toll collection and traffic management services provider Verra Mobility was acquiring US/Australian peer RDF Holdings at A$0.92/share in cash. This was a purely strategic trasnaction. The buyer seemed credible and had already completed several other international acquisitions during the last few years. Verra was forced to raise the offer to A$0.96/share and subsequently secured RDF shareholder approval. The idea was closed with 9% profit in 3 months.

Alcanna (CLIQ.TO) +0% In 3 Weeks
Alcanna (CLIQ.TO) launched an odd-lot tender offer for 9%-10% of its outstanding common shares at C$7.55 – C$8.30. The tender looked likely to get oversubscribed, however, the risk/reward ratio seemed compelling enough to participate with an odd-lot position. As expected, the offer was oversubscribed and priced in the middle of the range resulting in negligible profits.

Viva Gold (VAU.V) -1% In 1 Month
Golden Predator was acquiring its junior mining peer Viva Gold at 1.6 GPY shares per each VAU share. 2/3rds of VAU shareholders approval was needed and 18% was guaranteed by a combined directors’ stake. The strategic rationale for the two companies to merge was rather limited, however, the buyer seemed credible and strongly interested in Viva. Eventually, the merger failed to achieve shareholder approval, and the 2/3rds requirement wasn’t met. As expected, the downside proved to be well protected resulting in only 1% loss for hedged and 9% loss for unhedged positions.

Discovery (DISCA) -24% In 2 Months
This was a speculative play on a quick share price rebound. Partly, due to the liquidation of a large hedge fund Archegos, DISCA’s share price crashed over 50% from its recent highs. Recent reports indicated that Archegos collapse-driven liquidations are still continuing. Given the magnitude of the sell-off and a non-demanding valuation, it seemed that DISCA share price might rebound after the selling pressure subsides. This has not worked out as expected and DISCA share price continued the decline. The announced merger with WarnerMedia assets from AT&T did not help either. We have closed the idea with 24% loss in 2 months. Worth noting that at current levels, DISCA trades at 6x pro-forma 2020 adj. EBITDA and 5.1x E2023 adj. EBITDA, so the company might be attractive as a longer term holding.

China XD Plastics (CXDC) -40% In 1 Month
Modified plastics manufacturer China XD Plastics was in the process of privatization by its management at $1.20/share. CXDC used to trade at a tight 1% spread tilll the first adjournment of the termination date (Dec’20 to Feb’20). A signed definitive agreement, opportunistic timing, unusually quick announcement of a firm offer after the non-binding proposal, no financing conditions and a number of other aspects indicated high likelihood of successful closing. Initially, we’ve closed this idea in April’21 with 13% profit in 2 months after the spread was eliminated in the period of high share price volatility, however, a month later, without any news the spread widened once again and we returned this idea among active cases. Unfortunately, it appeared that the transaction was getting dragged on by ongoing lawsuits and eventually management decided to terminate the merger. This has been only the second failed US-listed Chinese firm privatization with a signed definitive agreement since 2016. The idea was closed with 40% loss (after reopening) in 1 month.