This is a very risky trading idea that involves selling options (far out-of-the-money ones). This is not an investment advice. Do your own due diligence before investing to understand full risks involved. Max upside is 100% while the downside is unlimited and could be multiples of capital deployed on this trade.

With the disclaimer out of the way, here comes the investment/trading idea.

Due to the recent spike and increased volatility of AMC shares (google it, plenty of front-page news coverage), option premiums reached stratospheric levels even for near-term expirations. In a way, today we have a replay of end-of-January situation when GameStop and a number of other stocks (including AMC) got temporarily squeezed by retail investor driven by WallStreetBets and Robinhood crowds and option buying craziness.

AMC call options expiring on the 18th of June (i.e. only two weeks from now) with an exercise price of $145 (way out-of-the-money or 3x above the current price) are trading at $7.6/share. Investors can pocket this whole premium by selling the respective call options if during upcoming two weeks AMC shares do not trade above $145/share. These options have traded as high as $16/share yesterday and will likely remain volatile. Other expiration dates and exercise prices should work-out equally well if AMC stock returns to normality in the coming days/weeks.

Scenarios for the next two weeks – the third one is the key one to consider:

I find it also very interesting that the difference in option premiums for calls with $100 exercise price ($10.5) and $145 exercise price ($7.6) is minimal – i.e. the market views the probabilities for AMC stock doubling or tripling from the current levels to be of the same order of magnitude. Exciting times we live in.

What is happening with AMC stock?

The spike in AMC shares has been widely covered by news media. The background story is the expected recovery in the movie theater industry after 1.5 years of covid lockdowns. Retail investors picked this up and started pushing the stock. Here is AMC ticker sentiment on WallStreetBets – over the last week almost 50% of the board’s activity was on AMC stock.

On top of that AMC’s CEO Adam Aron started welcoming and embracing the newly minted shareholders. His Twitter account does not seem to be that different from the WSB board itself. Apparently, most of AMC stock is now in retail investors’ hands. From Q1’21 conference call – 7th of May:

Second point, AMC now has an army of passionate, interested individual shareholders, some 3 million strong. The exact number was 3.2 million shareholders on March 11th, the last time we got an investor count. They owned more than four fifths of our then 450 million outstanding shares as of that March 11th date. Since then a lot of AMC shares have changed hands.

Mr. Adam Aron is riding the wave while simultaneously issuing tons of new equity in the market.

And finally, you have the announcements like the one on Mudric Capital buying $230m stake in the company that was initially portrayed by media as a long-term investment in the company and likely added the fuel to retail investor excitement. And then of course this happened on the same day:

Although I do not think fundamentals are really relevant in this case. Here are some high-level numbers: 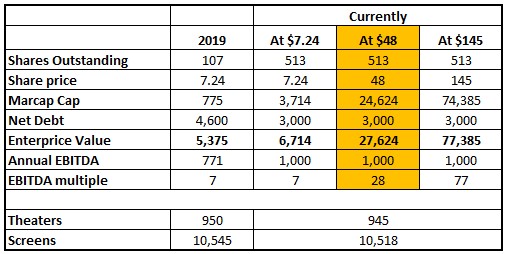 As you can see in the table the asset base has not really changed since pre-covid – the number of theaters and screens has remained virtually the same. The company has increased the share count 5x with continuous equity raises over the last half a year. Also, I am generously assuming AMC is able to reach $1bn in annual adjusted EBITDA sometime in the future (not this year, and probably not in 2022) by deploying its newly raised $2.5bn cash war chest for expansion – although the majority of it will most probably be spent for retiring debt and upgrading existing movie theaters. IMHO the movie theater industry is doomed in its current state – it was on the downward trend already, and covid just accelerated the switch to streaming – so the $1bn EBITDA assumption is likely to be overly generous.

Also it is quite hard to imagine a short squeeze with so many new shares getting dumped in the market by the company every day. 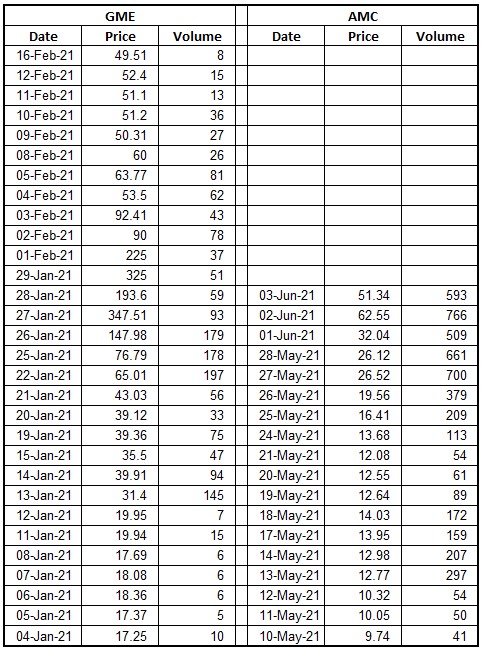 Elevated stock trading volume for AMC is already ongoing for way longer than it has for GME back in Jan’21. Obviously, the starting days at the bottom of the table are arbitrary and we might be at a different stage of AMC drama.

Selling options is inherently risky – the upside is capped at premium amount and the potential losses are unlimited. AMC stock remains very volatile and could easily double or triple from the current levels with no fundamental support whatsoever. The market is saying that these options should be priced at the current levels and the market is usually correct. This is not an investment advice and do your own research before investing.

And finally, always worth keeping in mind – “market can remain irrational longer than you can remain solvent” (Keynes).