On the 21st of June, Gold Royalty announced an acquisition of its peer Ely Gold Royalties in cash and stock. Assuming everyone ops for cash option total consideration will be C$0.42 incash + 0.1742 GROY shares. At current prices, this presents a 17% upside opportunity, while the closing is expected Q3. Approval from 2/3rds of ELY shares cast + majority of the votes cast by disinterested shareholders (ex. management) will be needed. Management owns 5%. The largest ELY shareholder – Eric Sprott (Canadian billionaire who specializes in precious metals investments) owns 22% of ELY and has agreed to vote in favor of the merger. The meeting is set for the 17th of August’21. 30k shortable shares for hedging are available on IB at 5% annual fee.

ELY has listings in Canada and U.S. – the Canadian listing is more liquid. The downside to pre-announcement price stands at 23%, so the risk-reward is fairly comparable, while the likelihood of successful close is significantly higher.

The buyer appears credible. GROY is a relatively new company – was spun-off from GOLD.TO in June’20 and IPO’ed in March’21 at $5 per unit. Apparently, the IPO was so successful that the company had to raise the financing limit twice – from $30m to $90m. The company is led by chair/CEO David Garofalo – former president and CEO of Goldcorp which was sold to Newmont for $10bn in 2019 – and former CEO of Hudbay Minerals ($2bn market cap). GROY is now focused purely on expanding its royalties portfolio through accretive acquisitions. With ELY they are getting large royalties/projects portfolio in low-risk locations, primarily Nevada and Quebec, while a substantial portion of GROY assets are in Latin America. Moreover, the buyer also gets instant exposure to ELY’s cash flow from 4 of ELY’s income-producing royalties (3 royalties generated $0.7m revenues in March’21), while a few more projects are in advanced stages of development already. GROY expects that the increased scale will provide easier access to capital markets to fund further growth, re-rating of the stock price, and increased interest from larger investors. Overall, I think the risk of the buyer walking away from this transaction is low.

ELY’s shareholder approval is a bit bigger risk. Just last month the company was arguing that its share price at 0.84x NAV is undervalued relative to peers at 1.3x+. The offer is now pricing the company just slightly above 1x NAV. ELY shareholders will own 45% of the combined company, even though ELY’s portfolio looks far larger than GROY’s and has already producing royalty streams. Ely’s CEO, who seems to be highly incentivized to close the deal has recently issued an open letter to shareholders agitating to approve the merger and stating that GROY assets are more “longer-term” and “well-endowed with gold and copper resources”. He also provides insightful comments on the general royalty market outlook:

The prices being paid for royalties today exceeds the value that the market currently places on ElyGold’s assets. Purchasing royalties at current prices has the effect of diluting the value of our current holdings, in most cases, for lower quality assets. Given these competitive market conditions, ElyGold’s board of directors elected to start a process to explore strategic alternatives in December 2020. […] The hidden story with this transaction is the coming consolidation in the royalty space. There are too many junior royalty companies and not enough good royalty deals to go around. In addition, the majors are competing for smaller transactions due to reduced deal flow.

The consents from management and Eric Sprott substantially increase the likelihood of approval. A more impressive pedigree of GROY management, scale benefits in the current royalty market, NYSE listing, and better chances of reaching index inclusions (both were the key ELY goals for 2021) could also incentivize shareholders to approve the transaction.

Merger consideration is presented as C$1.46/share in cash or 0.245 GROY shares subject to a maximum cash consideration cap at C$84m and a maximum 41.5m GROY shares to be issued. At the moment it’s not clear how the proration calculations will be carried out and the numbers for the scenario where all shareholders elect to receive cash have been taken from the PR. More information should be included in the upcoming management’s issuer circular (expected mid-July). 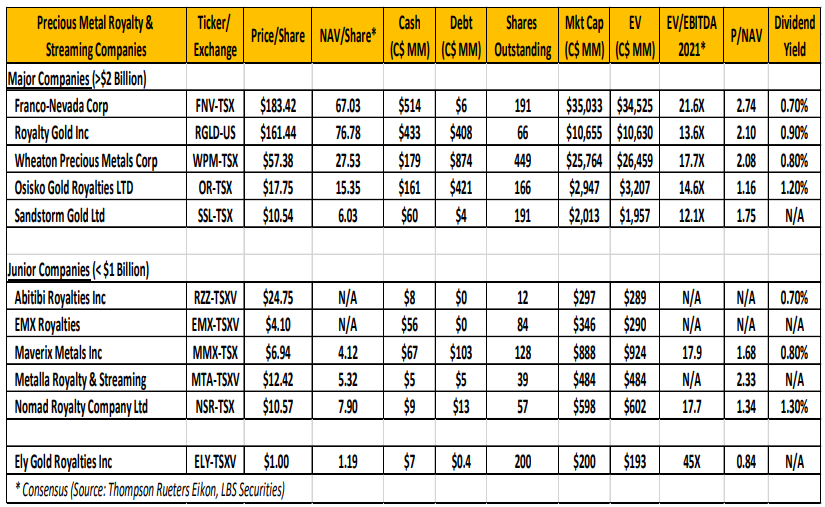 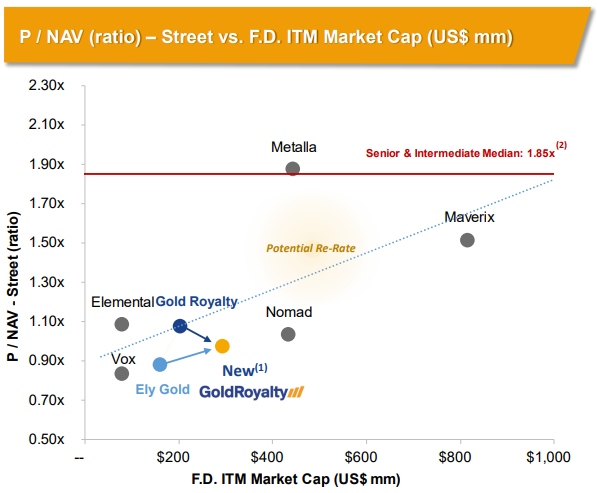 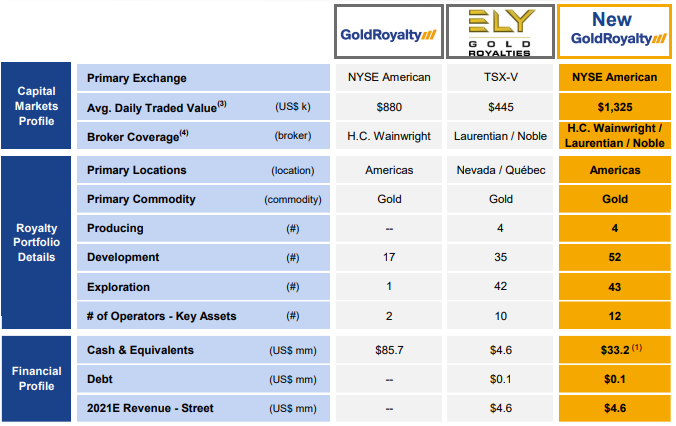