This idea was shared by Roberto.

This is a bit different special situation to what we usually post on SSI – the expiry of post-IPO lock-up. The main idea here is that after the IPO, a large number of shares are put into lockup (the standard is 180 days) and after the shares are unlocked, there is a potential for short-term share price pressure as some of the newly released shares might get dumped in the open market. Outcomes of post-IPO unlock situations appear to be case-specific and ZIM has several interesting twists which point towards a potentially successful playout of the short thesis.

Containerships operator ZIM Integrated Shipping did an IPO in early Feb’21 at $15/share and currently trades at $38/share, or 150% gain since the IPO. The company currently has 114.5m shares outstanding. 69m shares will be unlocked on the 26th of July. 32m of the unlocked shares are owned by the controlling shareholder who is not likely to sell. However, shareholders who own the remaining 37m to-be-unlocked shares (32% of total outstanding) could potentially opt to cash-out in the open market. Additionally, a further 20%+ of the outstanding shares will be unlocked in early September’21 (relates to the secondary offering carried out in June).

A recent example is CLOV, where 50% shares were un-locked on the 5th of July and the share price tumbled down by 30% since. For ZIM I am expecting similar results after the 26th July as well as after the second lock-up expiry in early September.

A potential way to play this could be shorting ZIM shares (1.3m available at 7% annual fee on IB) or buying put options and then waiting for the unlock related share price pressures (might happen before or after the indicated lock-up expiry dates)

Aside from the inherent risks of shorting – unlimited downside and limited upside, speculative, any positions must to be sized accordingly – the key aspect to consider is general industry tailwinds, which caused significant margin expansion and make the company very cheap on current earnings – 2x EV/adj. EBITDA E2021. However, there are solid counter-arguments that these tailwinds are temporary and the tide could turn fast.

ZIM is an asset-light container liner shipping company based in Israeli. It doesn’t own any ships and only operates the chartered-in liners. The fleet consists of around 98 vessels with a total capacity of around 3m TEU (unit equivalent to 20ft. container size). ZIM transports mostly dry van containers (general cargo, commodities in bundles, cartons, boxes, loose cargo, furniture, etc.). Additionally, in Feb’21 the company has also chartered 10 15k TEU capacity LNG (liquified natural gas) vessels. The company operates across these routes:

Historically, ZIM struggled with profitability, and 3 in the last 6 years were loss-making. However, since the COVID-19 shipping rates have started to rise – the trends became even stronger during the first half of this year (WSJ, Bloomberg). These tailwinds appeared due to several factors – increased consumer demand for products after COVID, stimulus checks, supply chain disarray (many major ports were locked down at various times), further disruption due to Suez canal blockage (March’21), and rising order backlog. Another reason is a shortage of containers as due to ports lockdowns last year, many ships were randomly dropping containers across the American ports as they couldn’t load them with cargo. This resulted in significantly stretched waiting times (up to a few months) for exporters to find shipping containers. Apparently, container prices have doubled since then as well. Unsurprisingly, all of that resulted in skyrocketing shipping freight rates globally. FBX global container freight index is up 2.87x since Nov’20:

Rates in the major ZIM trade route (Pacific) are up around 80% since Nov’20, while rates in certain routes, for example, Suez (East Asia – North EU) are up as much as 6x since Nov’20.

The whole containership sector is profiting in large from these rate increases – ZIM major peer Maersk is up 180%+ since the COVID outbreak and 36% YTD. Meanwhile, ZIM trades 150% above its IPO price (Feb’21). ZIM has more than doubled its revenues by only increasing shipping volume by 30% YoY. Not surprisingly, all of these incremental revenues went straight to the bottom line. 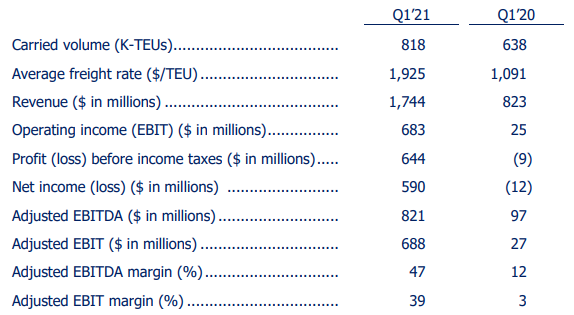 Why lock-up expiration sell-off is likely for ZIM?

1. Large number of shares will be unlocked – 60% of outstanding share capital. Half of that (28% of all outstanding) are owned by the controlling shareholder who will likely not sell, however, remaining shareholders could potentially start dumping shares post-lock-up expiry.

2. Pre-IPO shareholders are mostly ex-debt holders from the 2014 bankruptcy, during which creditors agreed to swap $1.4bn of ZIM’s total $3.4bn debt (at the time) for a 68% equity stake. The restructuring document can be found here. It is likely that most of them are not natural equity shareholders and will opt to cash out at nearly 3x IPO price. After the IPO the company was owned by:

Several major shareholders have already disposed substantial parts of their stakes in ZIM during the recent secondary offering in early June’21. In total, 7m shares were offered by the selling shareholders at $40/share price. KSAC Europe Investments sold 75% of its stake, Danaos Corporation sold 20% of its stake, Deutsche Bank – 10%, Bank Julius Baer – 50% (owned around 1% stake) and ELQ Investors sold all of its 0.2% stake in ZIM. Additionally, underwriters agreed to unlock additional 1.7m shares, which were sold in the open market after the offering. Sellers in the secondary offering have agreed to a further lockup of the shares for 90 days, so the lockup for the remaining Deutsche, KSAC, and Danaos shares (total of 20%+ outstanding) will expire only in early September. The fact that major shareholders were eager to sell a substantial amount of their stakes at $40/share clearly hints of potential overvaluation even with the current backdrop of high shipping rates. Given that most other pre-IPO shareholders are of a similar type (European banks and shipowners), it’s likely that they feel in the same way and will want to dispose of their shares after the lock-up expiration.

3. Current industry tailwinds and freight rate increases are not sustainable in the longer term and when the current issues are resolved, freight rates are likely to drop equally quickly taking the current industry’s profitability with it. Having said that, ZIM’s operating business model (dynamic pricing based on spot rates) is even more susceptible to volatility in short-term freight price changes, and its profitability drop will be faster and more painful than that of its competitors, which fully own their ships and opt for longer charters at fixed rates. The uncertainty regarding the future rates is high, however, the container shortage issue is expected to be resolved by the end of 2021, while the supply chain disruption overhang should also begin to clear in the upcoming quarters. Due to the global vaccination efforts, further impacts and disruption from COVID are likely to be limited. For the first time in several months, rates on certain major routes have already started dropping over the last few weeks – rates for East Asia – NA West Coast (Pacific) declined by 16% during the last two weeks, certain other Pacific routes dropped around 8%. EU – South America West Coast (Atlantic) rates are also trending downwards for the first time since March’20. It is not yet clear if this is just a temporary swing or have the industry pressures really started to ease. Shipping is very cyclical in nature and the above-listed shareholders might not be willing to maintain exposure through the cycle (especially on the equity side, rather than debt as initially intended) and risk industry down-turn.

4. At the moment the company is generating huge amounts of cash. It recently raised adj. EBITDA guidance to $2.5bn-$2.8bn for 2021 (from the previous $1.4bn-$1.6bn) and trades at around 2x EV/adj. EBITDA E2021 (including leases). If the rates are going to remain elevated for a few more years, the company is very cheap. However, current ZIM valuation also stands at 20x average adj. EBITDA of 2017-2019, which is extremely high for shipping stocks. Thus, if the rates go down, then ZIM share price will drop like a rock (and much faster than the rates themself). The same applies for the rest of the shipping industry. One of the major global peers, industry leader A.P. Møller – Mærsk ($52bn market cap) currently trades at just 4x EBITDA guidance for 2021, whereas it is a much bigger player with substantially more scale and no overhang from special state share (explained below). This clearly shows that the market is skeptical about shipping rates remaining at current levels for long. One additional note – ZIM has also outperformed its US peers (mostly that own ships) since the IPO, so it definitely doesn’t look upcoming unlocks are already priced in: 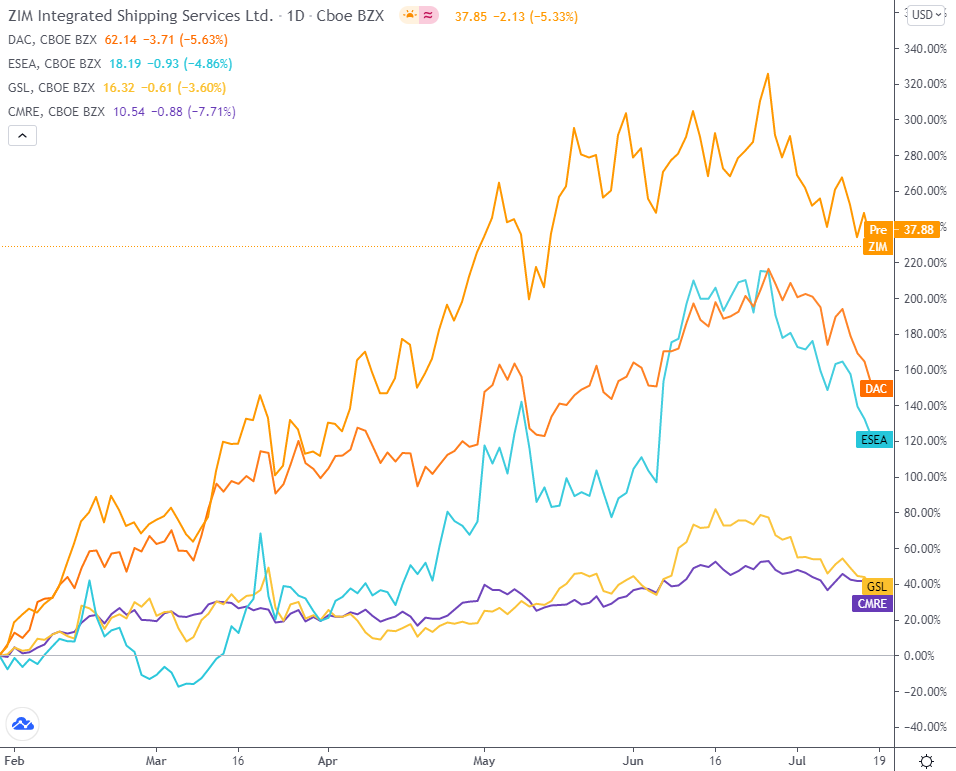 5. ZIM IPO was a failure – the stock got priced below the initial range of $16-$19/share with 3m less share sold than initially intended (total proceeds were 29% below initial expectations). Underwriters (major investment banks) also refused to exercise their option to buy over 2m shares in the 30 days after the IPO. So clearly, the company wasn’t hot at all before the recent rate spike, although freight rates were already quite elevated before Feb’21. Probably, the market expected faster rate normalization (mid’21), however, the industry got significantly impacted by the Suez blockage in March.

6. It is quite likely that ZIM’s management also expects a sell-off after the unlock as, quite strangely, they’ve announced a special dividend of $2/share in September. The announcement was made in May. The move seems aimed specifically to provide share price support during the lock-up expirations as otherwise there seems to be no reason for the 4 months gap between the announcement and payout dates (the company had plenty of cash as of Q1’21).

7. Israeli government has a strong influence on ZIM operations due to their special state share, which imposes certain restrictions on operations and gives Israel veto power over transfers of certain assets and shares above certain threshold. The special share was given to the government in 2004 and amended during the 2014 bankruptcy. This effectively acts as an anti-takeover measure as in order to acquire more than 35% shares of the company, you need consent from the government. Shareholders that own 24%-35% also need consent to transfer their shares. Spin-offs, mergers, etc. must also be approved by the government. Given these control restrictions, the stock could be much less attractive for many pre-IPO shareholders, and even those, who in general like to have exposure to the shipping industry. Special state share implications are also the reason why I believe Kenon won’t be selling down its stake after the unlock.