BrightSphere Investment Group is an asset manager 25% owned and chaired by John Paulson, billionaire hedge fund manager of the GFC fame. The company is currently in the process of transferring from a multi-boutique asset manager business model to a single focused manager, has already sold 5 out of 7 of its affiliates, and the sale of the 6th is expected to close this quarter (Q3’21). Following these divestitures, BSIG will remain with its flagship quant asset manager Acadian and with more than half of the current market cap in cash – $15.8/share gross and $10.9/share net. The company expects to pay down some of its debt and return the remaining cash to shareholders. Thus, in a few upcoming months, we can expect a very large, potentially up to 40%-50% tender offer or a special dividend. The remaining business, Acadian, now trades at around 6x normalized adj. EBITDA, whereas the two other much smaller affiliates were sold at 16.4x adj. EBITDA and around 9x adj. EBITDA. Given that Acadian is BSIG’s largest and most profitable asset and that the previous multi-boutique discount overhang should be eliminated soon, the current valuation of 6x normalized adj. EBITDA looks way too low, especially for an asset manager chaired and owned by John Paulson. I would expect the company to re-rate with the upcoming capital return. A more reasonable but still conservative 9x adj. EBITDA multiple translates into a $34/share target price and 30% upside from the current prices.

Management also seems open to selling the Acadian business as well but apparently hasn’t found the right partner yet. Such an event would potentially result in an even faster and higher upside from this investment.

BrightSphere Investment Group was previously known as OM Asset Management until the rebranding in 2018. It used to be a holding company with majority stakes in several different asset management companies with the remaining stakes owned by managements of those companies. After the rebranding, BSIG had 7 affiliates and then started divesting them in July’20. Subsequently, after 1 year the company sold off all of the businesses, except for Acadian. Interestingly, management called this a transfer from the multi-boutique business model, however, certain comments during the last two conf. calls hinted that Acadian was also up for sale and they are still open for a deal. Q2,21 call:

Analyst
Okay and then just a follow-up I had was Acadian on the list of things you’d take calls on, meaning is it just — you haven’t found the right partner, the right price yet or is it that tax potential liability that is just still laying the conversation. In other words, is this just a matter of time.
CEO
We’re very happy with the business, it’s a scale business in a very differentiated areas and it’s a great team, great track record to serve their clients very well. So, we think it’s a very good business for the public markets and we’re happy to keep going. At the same time, we’ve always maintained that it is our fiduciary duty to our shareholders that to the extent there was a party that was really able to award our shareholders, we would consider it.

CEO
And as we’ve said to the market and our shareholders that we — our primary focus is fiduciary duty to maximize shareholder value. And we have a good plan, and our Affiliates are strong businesses and that generate really good cash flow. So we don’t necessarily have to do anything, but we do — as a result of our public stance that we are open-minded and have a fiduciary duty to maximize value, we do get inquiries from time to time, and we review them along with the teams. And if there’s anything, anything of interest, we discuss further. So that’s generally how we’ve been approaching things.

The remaining and disposed business segments

Segmentation and lack of data on certain disposals makes it virtually impossible to track down valuation multiples for the remaining affiliates. For the TSW, some information was disclosed in the Q1’21 presentation “Segment Information” slide as TSW was the only remaining business in the Liquid Alpha segment (also confirmed by management on the conference call) form which I deduced 9x adjusted run-rate EBITDA valuation multiple. The company also confirmed this on the conference call.

Comments on the capital return

After closing Campbell sale (the last currently outstanding deal), the company expects to have cash on hand (after tax) at around $1.3bn. The company also has around $400m of debt for a net cash position of $900m. Management made numerous comments on intentions to use the cash to return capital to shareholders. Q2’21 call:

Thanks, Rob. Yes, on the first question. You’re right, we still have not finalized our action plan decisively around the capital. It’s a rather large amount of capital. So, we continue to tinker. However, as we have said, high level it is for debt pay down and returning capital to shareholders. And in terms of sequencing, yes, we plan to at least pay the retail notes of $125 million first before returning capital to shareholders. But, yes, there is — it’s — at least that part is straightforward. Yes, I agree, we just want to execute the entire plan more holistically.

Closing the Landmark sale later in the second quarter would provide us another $630 million after-tax. So that provides us ample capacity to deleverage substantially as well as return capital to our shareholders.

once that capital is fully in the bag, it will be easier to have a holistic view and execution at that point rather than tranching it and doing a little bit now without having the second part fully executed. But in terms of priorities, those are the uses essentially, deleveraging and returning capital to shareholders.

We continue to evaluate as to what the best use of capital is, but returning capital to shareholders remains our priority in the top news. And then as I mentioned earlier, we are also looking into using some of the proceeds to work potentially towards little bit more de-leveraging. So couple of ways we could do with that is repurchases. We are monitoring the market. There is a lot of volatility. So we will see what the right timing maybe. We do have a bias toward using up the capital sooner rather than later. You could also consider 1x special dividend for example. We are thinking through that so more to come in the next call it month or a couple of months on that but essentially the return of capital to shareholders being the primary use and maybe a little bit more de-leveraging.

At the moment the company has $2.1bn market cap with $900m pro-forma net cash for an EV of $1254m. Acadian’s most recent adj. EBITDA (Q2’21) was $53m for a run-rate of $212m. BSIG’s financial reports are a bit vague in regards to the corporate overhead figures, but these seem to be included in the ‘Other’ segment which also covers already sold ICM and Campbell operations:

Management has made multiple comments that going forward we should consider the $53m quarterly adj. EBITDA as the “right” run-rate for the remaining business. Q2 call:

Yes, so we’re really focused on the Quant & Solutions segment, which is Acadian and yes, that’s the $53 million is the right run rate in the ballpark. Of course, quarter-to-quarter there are some things that happen $1 million or $2 million seasonal items. But that’s about the right run rate for Quant & Solutions. […] So, over time, we would expect more efficiency in handling public company costs, so that the full Acadian EBITDA of $53 million and going from there goes to the shareholders

Analyst
Great, thanks. So, maybe just a quick follow-up there, just on the other segment. I guess, what can we expect near-term into 3Q and 4Q for that sort of corporate overhead and then what sort of timeframe would it take for that to get, I guess, in your view eliminated where you basically kind of get really closer to that $53 million, what sort of actions have to be taken and how realistic is that as a public company to really achieve that?

CEO
Yes. So, in 3Q we would have a month of ICM and we would have probably one quarter of Campbell, but 4Q is when the — when you would really just see the headquarter costs, which was in that $20 million ballpark and we’ll continue to whittle it down over time. It’s not a quarter or two, it’s probably longer than that, but it’s as Acadian continues to scale, there would be more that we can do on the other side. But yes, over time, we would expect that continues to get smaller and smaller.

From a more conservative perspective, $53m was somewhat elevated due to general market appreciation leading to higher AUM and $5m performance fees attributable to Acadian (although management notes that this level of quarterly performance fees is the average). Excluding performance fees still leaves $192m normalized adj. EBITDA figure and a 6.5x multiple. Even if AUM deteriorates back to 2020 levels and the company delivers quarterly adj. EBITDA of $40m (2020 average was $36.8m), the business is still trading at 7.8x adj. EBITDA multiple. So overall, no matter how you put it, there seems to be a sufficient margin of safety, considering that Landmark was sold at 16.4x EV/EBITDA. Historically, Acadian had significantly better adj. EBITDA margins than the Alternatives segment – 38%-46% for Acadian vs 22%-30% for Alternatives (the absolute majority of which was likely generated by Landmark as Campbell is much smaller).

There is also a question of corporate overheads – management hinted to a figure of $20m (my understanding annually), expected to decline gradually. So these have minimal impact on the valuation of the core business with c. $200m in annual EBITDA. Also in the Acadian acquisition scenario corporate overhead could be eliminated, resulting in an even more favorable valuation multiple for the potential buyers (Q2  call):

Also, if there were ever to be an acquisition in that scenario, a buyer would not need the public company costs. So, for those reasons we don’t really view these costs in the other as core and are really from a management perspective much more focused on the EBITDA that’s produced by our operating business. 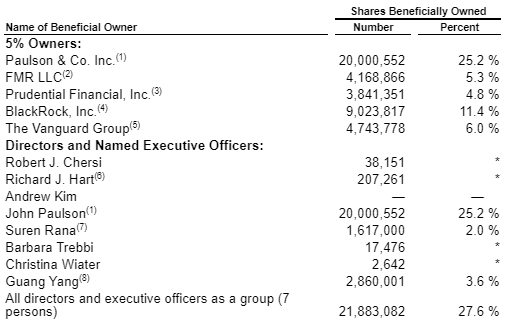 Management owns 27.6%, which includes 25.2% owned by the chairman John Paulson. John Paulson is an American billionaire and highly regarded hedge fund manager, who earned his fortune during the GFC. Paulson became the shareholder of BSIG in Nov’18 after buying a 22% stake from the Chinese conglomerate HNA Group at around half the current market price.