Logan Ridge Finance (previously Capitala Finance) is a small, underperforming BDC, which trades at the second widest 40% discount to NAV vs 4% premium for peer average. The company was valued around its book value pre-COVID, however, after the dividend suspension in Q2’20 the stock lost its attractiveness to yield-seeking BDC investors and the spread widened substantially. Last month Logan Ridge transitioned to new investment manager, Mount Logan, which is an affiliate of BC Partners ($40bn AUM). It already has a track record of turning around a similarly sized BDC (PTMN, which trades at 18% discount to NAV) and intends to apply the same framework to LRFC. Mount Logan emphasized that it will make the reinstatement of dividends a top priority. The turnaround process and, especially, dividend reinstatement should act as a strong catalyst for LRFC re-rate closer to its NAV of $45/share.

Following the closing of the transaction, we envision concurrently repositioning the portfolio to drive a higher portfolio income as well as addressing the near-term debt maturities – with the clear objective of returning to paying a dividend in the near term

An example of an impact a dividend policy has on BDC companies can be seen in HCAP case. HCAP was a similarly sized BDC that was recently acquired by PTMN (the merger was covered on SSI). During the COVID outbreak in April’20 HCAP deferred its dividend payments, which (alongside pandemic impact) tore the discount to NAV from 20% to almost 80%. The gap remained at that level until the payment of the deferred dividends was announced on the 24th of November, which promptly doubled the stock price in 1 week and narrowed the discount from 70% to 30%.

At the moment, there are only 5 BDCs that do not pay dividends and 4 of them rank as having the highest discounts to NAV: 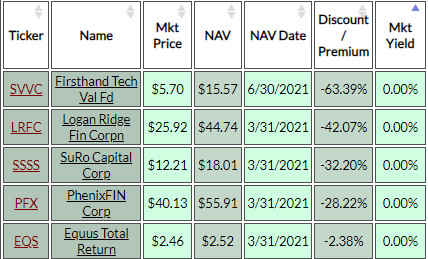 The only peer that trades at a lower valuation (61% discount) is SVVC, which is a smaller and terribly mismanaged BDC with a much riskier portfolio, no dividend payments since 2014 (except 1 tiny distribution in 2018), and entrenched manager, who recently “blocked” 2 shareholder attempts to either liquidate the fund or terminate its investment manager.

Executives are focused on reducing equity in Capitala’s portfolio over the next year, with a material decrease showing in the next two or three quarters.

The key question here is the earnings power of the rebalanced portfolio and what yield/share price can be expected after the dividends are reinstated. I am targeting $33.5/share price which is 25% discount to NAV (somewhat wider than PTMN’s 18% discount) and my back-of-the-envelope calculations suggest that at this price the rebalanced portfolio would support the same 10% yield as PTMN.

Aside from that, there could also be another longer-term special situation play embedded here – potential LRFC acquisition by PTMN. Over the last two years PTMN has been successfully rolling up smaller BDCs. Given a similar portfolio composition of both BDCs, it makes sense to think that BC Partners could drive larger synergies with LRFC and PTMN as a single entity. Management so far hinted at positioning LRFC as a BDC roll-up platform similar to PTMN, however, once the portfolio turnaround is finalized the merger between two entities could also be expected.

The external manager change was announced on the 21st of April. The presentation can be found here. The transition was completed on the 27th of July.

The new manager, Mount Logan, intends to implement these changes:

Going forward, we intend to focus LRFC on investments in high quality, senior secured debt investments with the goal of delivering consistent, sustainable earnings over the long term.

It is our belief that a BDC focused exclusively on the Middle Market lending space will lead to better long term performance, a more stable NAV and a better trading multiple.

Focus on scaling the vehicle via strategic transactions – similarly to what management has done with the PTMN platform, where NAV grew from $143.7mm to $216.3mm – in order to narrow the trading gap.

Potential earnings of the transformed portfolio

While this is a bit of a theoretical exercise and assumes that equity investments will be liquidated at current BV, it shows that, at the target share price of $33.5 (i.e. 20% discount to NAV) portfolio earnings could easily support 10% dividend yield (same as PTMN). The average yield of debt-focused BDCs is actually 8%, so I am targeting for LRFC to trade worse than the average.

After the company converts $80m of equity investments and repays $71m of SBA debt, the cash balance will stand at c. $100m (including the current cash balance of $60m and the above mentioned $32m of debt investment maturities). Assuming this cash gets reinvested into first/second lien debt at a more conservative 8.5% yield, the company would generate c. $9m of incremental annual income. So the total net investment income from the legacy and the new debt portfolio should amount to c. $25m.

On the expense side, I am only modeling savings on the interest expenses due to the planned repayment of SBA loan as well as the refinancings of the remaining notes. This would bring interest expenses down to $6m (excluding deferred financing fees) from the current $9.2m. The base management fee remained unchanged at 1.75% of gross assets, which translates into $4.3m expense (based on $250m portfolio assets). SG&A is also likely to remain relatively unchanged at around $5m per year. This brings total expenses after the refinancings are expected to be $15.

Summing up the two leaves $10m in distributable income or $3.7/share.

Of course, these are just basic back on the envelope calculations and the actual portfolio rebalancing will be much more complicated, however, given the track record, comments and plans of the new manager to focus on larger deals gives some confidence here.

The company IPO’ed in Sep’13 and until recently was managed by Capitala Investment Advisors. The sluggish capital allocation, subpar size, high leverage and relatively large portfolio part in non-interest-bearing equity investments made sure that historically the company underperformed its peers and the market in general.

Historically, the company used to trade at a 10%-20% discount to NAV, except for the period of 2017-2019, when the company was facing certain investment performance issues and the portfolio looked much worse than now. 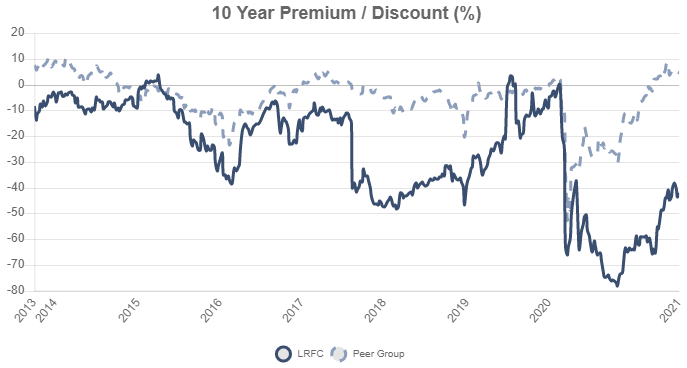 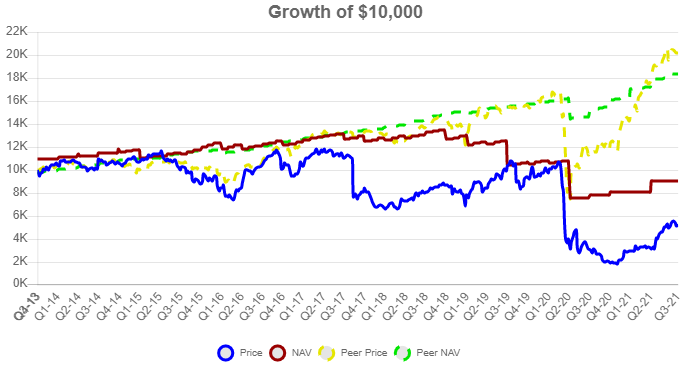 The sharp drop in the share price and P/NAV in 2017 was driven by the poor Q2’21 results unveiling a growing list of problematic loans, the default of 6 loans (10.4% of investment portfolio), and concerns over future dividend coverage. Since then the company has been working through these issues, focusing on stabilizing its portfolio by growing first-lien debt investments and increasing the quality of its investments. The efforts gave fruit, which were reflected in the company’s valuation – in the H2’19 and first months of 2020, the company caught up with its peer valuation levels and traded around NAV.

Portfolio split by investment performance expectations as of Q1’21 vs Q2’17:

Investment portfolio as of Q1’21: 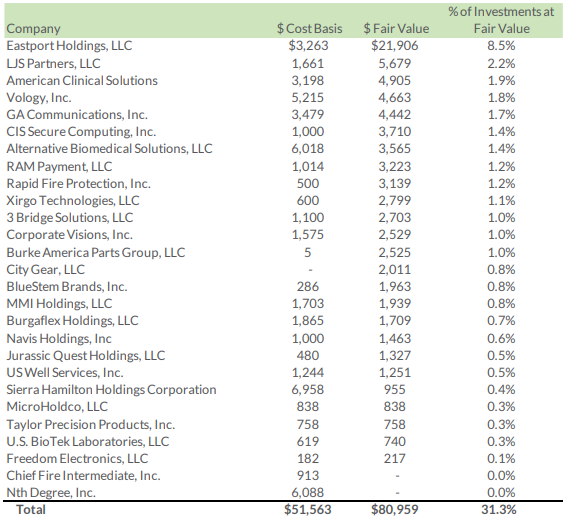 Note: CIS Secure Computing and Xirgo Technologies have already been sold in May. Rapid Fire was sold in July.

Mount Logan, the new manager, is an affiliate of BC Partners, an alternative investment manager with $40bn AUM. BC Partners operates two business divisions – BC private equity investments and a credit investment platform, BC Partners Credit ($4.2bn AUM, includes Mount Logan and PTMN).

BC Partners became the investment manager of PTMN (previously KCAP Financial) in early 2019. It promptly refinanced PTMN debt, rebalanced the portfolio by focusing on first-lien debts, which went from 31% to 79% of the portfolio, and getting rid of collateralized loans. PTMN also made 3 acquisitions – OHAI, GARS and HCAP – quickly liquidating substantial amounts of the targets’ assets (62% of OHAI portfolio was realized in 1 year, 34% of GARS portfolio in 1 quarter since the acquisition). In the end, PTMN ROE increased significantly and the discount to NAV narrowed down from 37% (announcement was made in Dec’18) to the current 18%. PTMN now trades at a better valuation than pre-COVID, whereas LRFC discount remains very wide. 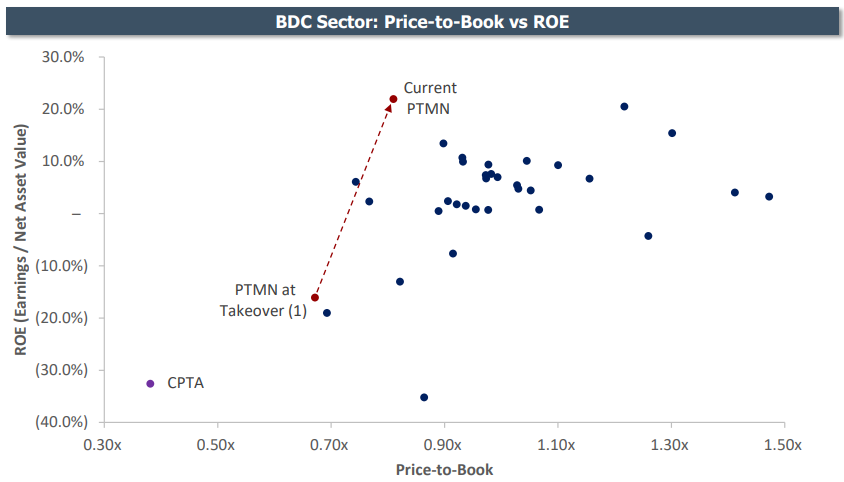