Our tracking portfolio generated 3.9% return during August 2021 and 53% year-to-date. A detailed performance breakdown is provided below.

We have posted 11 new special situation ideas in August. We also closed 11 ideas – all at except two at a profit. The key highlights are – LTRPA/TRIP discount convergence (+32% in 4 months), GPY.V merger arbitrage (+22% in 3 weeks), ELYGF merger arbitrage (+19% in 1.5 months), and WFG.TO tender offer (+C$1244 in 1 month). All the other ideas closed during the month are detailed below.

46 ideas are currently active on SSI.

The graph below details the individual MoM performance of all ideas that were active during the month of August 2021. This chart excludes Quick Ideas. 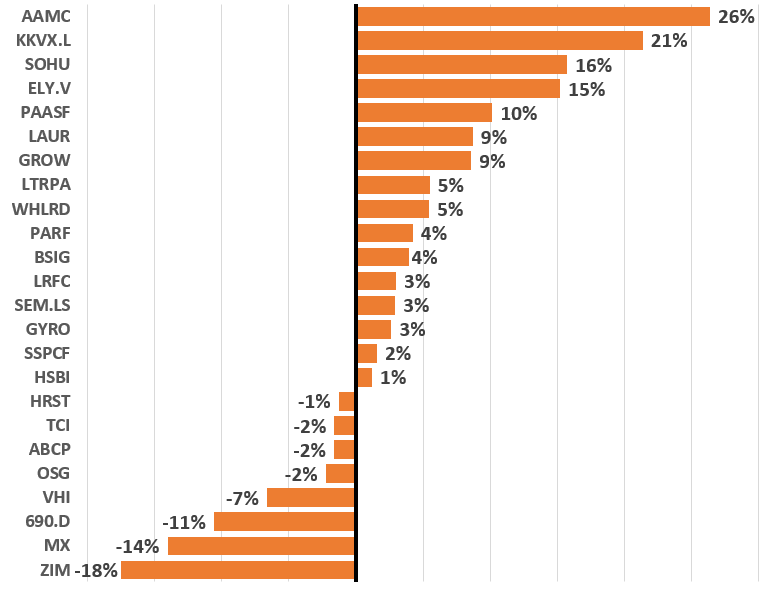 Liberty TripAdvisor Holdings (LTRPA) +32% in 4 Months
Liberty TripAdvisor Holdings (LTRPA) was a tracking stock for TripAdvisor and owned 22% economic interest (58% voting power) in TRIP. Following Covid LTRPA started trading at a sharp discount to its NAV vs premium/parity pricing before. The situation offered material upside if the discount was to be eliminated fully. Recent recapitalization transaction partially removed the reasons for the spread to exist and cleared the path towards a return to historical trading levels. The thesis did play as intended with the discount almost entirely eliminated (only 7% spread). The idea was closed with a 32% hedged return in 4 months – the whole upside has been generated by the short leg of the trade.

Ely Gold Royalties (ELYGF) +19% in 1.5 Months
This was a merger arbitrage case between two gold royalty companies. Consideration was to be paid in cash and stock with some borrow available for hedging. Despite the short timeline and limited risks for the deal to fail, the situation offered 17% spread. This deal was supported by Ely’s largest shareholder (notable Canadian precious metal investor). On the 17th of August, the merger was approved by shareholders. Surprisingly, a double-digit spread was also present after the shareholder approval with only a couple of trading days remaining till closing.

ZIM Integrated Shipping (ZIM) -15% in 1 Month
Containership operator ZIM Integrated Shipping did an IPO in early Feb’21 at $15/share, then did a secondary (entirely by selling shareholders) in June at $40/share and traded at $38 at the time of the write-up. Lock up on 60% of the outstanding shares expired on the 26th of July, with a further 20% set to be unlocked in early Sep’21. Pre-IPO shareholders were mostly ex-debt holders from the 2014 bankruptcy and were expected to use elevated ZIM prices to exit the investment. The company seemed significantly overvalued on a normalized earning basis, however was over-earning at the moment to be drastically higher shipping rates post-covid. The thesis did not play out as expected – ZIM shares have slightly declined upon lock-up, but then rebounded quickly. In the meantime, shipping rates have appreciated even further and ZIM has recently increased its adj. EBITDA guidance almost 2x since May’21 to $4.8bn-$5.2bn. If the situation persists, the company will earn all of its current market cap in 2021 alone. The idea was closed at a 15% loss.

Gyrodyne (GYRO) -32% in 2 years
Gyrodyne was proceeding with its 10-year-old liquidation and seemed to be set to finally liquidate over the next two years. GYRO owned two real estate properties and for the last few years had been working to enhance asset value by subdividing one property and changing the zoning of another. However, neither the property entitlement discussions with local authorities nor the liquidation process itself is/was moving as expected and BV per share has declined sharply over the last few quarters. The company does not seem to be able to find buyers for the properties in its current states either, suggesting that management’s liquidating distribution assumptions might still appear overly optimistic. Given the so-far disappointing developments, extended timeline and limited upside in the base case scenario (only 14% over 1.5+ years) we are closing this idea at 32% loss in two years.

Golden Predator Mining (GPY.V) +22% In 3 Weeks
This was a nano-cap all-stock merger of two advanced junior gold miners. Arizona Gold was buying Golden Predator Mining for 1.65 Arizona shares per Golden Predator share. As expected, support from both firms’ key stockholders was enough to secure shareholders’ approval and the merger is expected to close on the 2nd of September. Liquidity and borrow availability were low/limited, however, for those who were able to initiate a position the thesis has played out just fine without hedging as well.

West Fraser Timber (WFG.TO) +C$1244 in 1 Month
West Fraser Timber launched a dutch tender offer for 10% of its outstanding shares with a price range of C$85-C$98/share. The offer included odd-lot provision. Due to high withholding taxes, the idea was actionable only for Canadian tax residents or others not liable to pay these (potentially US IRA accounts). Recent lumber market tailwinds suggested that despite the small tender size, many shareholders could refrain from tendering. As expected, the offer ended up being priced close to the upper limit at C$97/share with high proration, generating C$1244 profit in 1 month for odd-lot holders.

Vectura (VEC.L) +8% In 1 Month
UK’s drug development and manufacturing company (inhale therapy) Vectura has received two bids from financial and strategic buyers. Carlyle (Financial) offered £1.36/share in cash, which was outbid by Philip Morris International’s (strategic) offer at £1.50/share. Carlyle was considering its options and shares traded at a small premium to PMI’s offer. The situation presented a heads I win, tails I don’t lose much set up. As expected, Carlyle raised the proposal to £1.55/share and PMI quickly countered it with £1.65/share. Both offers were declared final and the board chose PMI. The spread got eliminated and we closed the idea with 8% profit in 1 month.

Sogou (SOGO) +5% In 7 Months
The 2nd largest Chinese search engine Sogou announced a takeover offer from its largest shareholder (58% stake) Tencent. Consideration was $9/share in cash. The market has initially considered this to be a done deal, but the spread increased materially after the Chinese tech crackdown. Despite that, a number of positive aspects indicated that the offer is still likely to close. Most of the concerns for this merger have already passed as Chinese regulators gave conditional approval. The offer is now expected to close in H2’21. As the spread narrowed, we closed the idea with a 5% gain in 7 months.

Fairfax India Holdings (FIH-U.TO) +$180 in 2 Months
Fairfax India Holdings announced a substantial issuer bid (tender offer) for 6%-7% of its outstanding shares at $12.50-$15.00/share. Odd-lots provision was included. Withholding taxes for non-Canadian residents were low. The tender was priced at 0.7x – 0.83x BV, while historically FIH used to trade around its book value. Management and parent (Fairfax Financial) did not intend to participate. The offer ended up priced near the upper limit at $14.90/share with 92% proration. The idea generated $180 profit before withholding taxes and $130 after withholding taxes in 2 months.

Flagstar Bancorp (FBC) +4% in 2 Months
Flagstar Bancorp announced a merger with New York Community Bancorp. Consideration stood at 4.0151 NYCB shares per FBC share. Plenty of cheap shortable shares was available on IB. Regulatory issues seemed unlikely, however, the approval of both FBC and NYCB shareholders was required with target’s shareholder approval presenting more risks. However, due to limited downside the situation seemed like a low-risk option on a potential bid increase. Eventually, the merger was approved on both sides and we closed the idea with 4% gain in 2 months.