Less than two weeks after we successfully closed the Ely Gold merger arbitrage case, Gold Royalty announced two more similar acquisitions – Abitibi Royalties and Golden Valley Mines. Both transactions are a “package deal” as Abitibi is a 2011 spin-off of Golden Valley and the parent still owns a 45% stake in Abitibi. Quick idea on Abitibi’s takeover is posted here.

On the 6th of September, Gold Royalty announced a definitive acquisition of Golden Valley in an all-stock transaction coming in at 2.1417 GROY shares for each share of Golden Valley. GROY seems like a credible buyer with an accelerating acquisition spree to grow its royalties’ portfolio and is unlikely to withdraw the offer. Conditions include consent from 2/3rds of Abitibi shareholders and also approval from the majority of the target’s minority shareholders. Management owns 29% and so far it’s not clear if any of these shares will be excluded from the minority vote. More information will be detailed in the upcoming circular. Nonetheless, given the initial support and all-time high price, I expect that shareholder approval to pass easily. The meeting date is set for the 29th of October. The downside to the pre-announcement price is 34%. Borrow for hedging is available at 24% but is limited. Closing is estimated in Q4’21 (likely early November), so even with these borrow costs ample upside on the trade remains.

The remaining 44% stake in Abitibi is the most valuable asset of Golden Valley due to Abitibi’s exposure to several Canadian Malartic Mine’s (largest open-pit mine in Canada with an annual production of 700k oz and AISC of C$800-C$900/oz) royalties. The key royalty Odyssey is already in the construction phase and is expected to have at least 18 years of mine life. Overall, GROY should be highly incentivized to add these assets to its portfolio amidst the consolidating gold royalties industry. On top of that, Golden Valley also has smaller stakes in two junior miners Val-d’Or Mining (38%), International Prospect Ventures (11%), both of which were also spun-out from the company, and a few NSR’s in early-stage projects.

Some more info on GROY and its targets can be found on Abitibi Royalties merger arbitrage write-up.

Gold royalties market is consolidating and as put by ELY.V CEO (previous GROY acquisition) it is getting substantially more difficult, even for larger players, to find quality assets. Hence, GROY is highly incentivized to get their hands on Abitibi’s core assets – royalties in Canadian Malartic Mine, which it says “will become a significant cash flow generator for the combined company” (PR):

The acquisition of Golden Valley and Abitibi Royalties represents a very compelling extension of our strategy by adding royalties over the world class Canadian Malartic mine – a generational asset that will continue to deliver gold production for decades to come.

The Canadian Malartic Mine is a pure-play on gold with an annual production of ~700k oz and ASIC (all-in sustaining costs) well below the industry average ($800-$900/oz). The key royalty is a 3% NSR (net smelting return) over the Odyssey Underground project, which is already in the construction phase. The Odyssey mine is expected to become Canada’s largest underground mine with an 18-year mine life with the potential of beyond that. As confirmed in the recent update, the construction seems to be ahead of schedule and below budget. 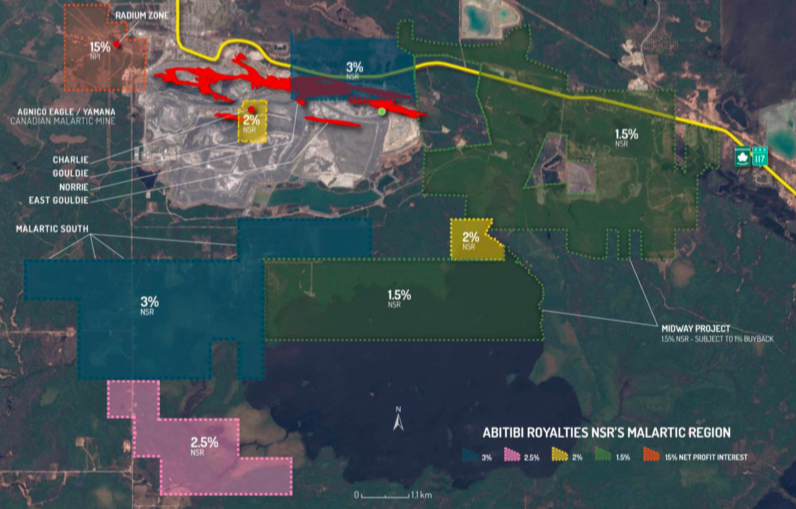 The company has started the acquisition spree after its IPO in March and aims to re-rate with the increased scale. Worth noting that unlike most micro-cap royalty players the company seems to have a heavyweight management team – GROY’s CEO is the former CEO of Goldcorp ($10bn market cap) and Hudbay Minerals ($2bn market cap). 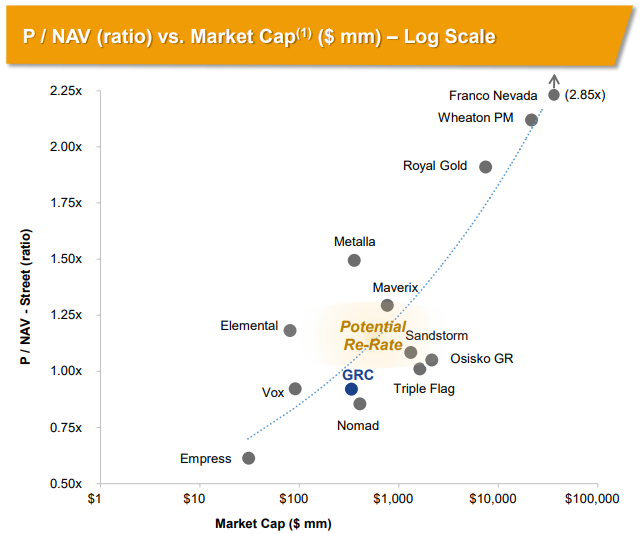 The combined company (including both Golden Valley and Abitibi Royalties) will have 191 royalties including in 6 cash flowing and 7 near-term cash flow and 14 development stage projects.