This idea was shared by Duncan.

Australian trading and wealth management software developer Iress received non-binding takeover proposal from Swedish PE EQT Fund Management. The offer price has already been bumped two times and now comes at A$15.75/share in cash. Just before the EQT’s proposal there were rumors of other interested parties as well. Management supports the deal and EQT should be wrapping up the due diligence process soon. If a firm offer is announced, the current 13% spread is likely to get eliminated promptly. The spread fluctuated around 4% initially and increased to the current levels just recently. IRE now trades significantly below the initial offer (A$14.80/share). The downside to July’s pre-announcement price stands at 11%, however the actual downside is likely to be lower due to improved growth guidance, buyback program and positive H1 results.

The valuation seems rich at 22x forward EV/EBITDA vs peer average at 15x, however, historically IRE has mostly traded at 4-7 turns above peers, so the price seems kind of fair especially counting in takeover premium. IRE is a very stable business with 90%+ recurring revenues. The company provides software solutions to financial clients (financial advice, trading and market data, superannuation, mortgages, etc.). The whole sector is riding on positive tailwinds and Iress has already upgraded profit guidance by 23% in April. Recently the company announced major growth plans and transformation/transition into a single platform business model – Iress now intends to sell its mortgage business in FY22 and refocus on investment infrastructure, superannuation, and UK businesses. This new plan is expected to increase profit margins substantially. Revenue growth is now guided at 7% CAGR by 2025, while net profit after tax is forecasted to double or triple from 2020 to 2025 (this compares to a rather slow historical growth previously). The company also expects to be able to distributing A$3/share in annual dividends by 2025 (21% yield at current prices). Recent H1 results were also very positive guiding for accelerated growth and +17% segment profit growth in H2’21 vs H1’21. A summed by the IRE CEO (PR):

Following a comprehensive board-led review, it is clear the opportunity for Iress is greater than previously anticipated. In July we announced plans to accelerate growth and returns for shareholders with a new medium target to more than double net profit after tax by 2025, with potential for further upside. In completing the transition to a single technology platform, we will also achieve greater operating leverage and speed to market.

It seems unlikely EQT would walk away from the deal unless some serious issues during the DD.

So far, none of the major shareholders voiced their opposition. Given the size of this deal, competitive landscape of the sector, and credibility of the buyer, I don’t think regulators will have any objections either. Above all, if the firm offer is announced, the spread will likely narrow significantly – thus the success of this case is not really dependent on the actual deal closing.

The largest risk is the non-binding nature of the current offer as well as ongoing due diligence. The deal could get dropped as has previously happened with LNK.AX (covered on SSI). However, that acquisition was a bit different with most LNK value being attributed to just one fast-growing segment (PEXA). On a positive side, another peer (although much smaller) OVH.AX was successfully acquired by Iress itself at 16.1x EV/EBITDA (A$107m) at the end of last year.

Below tables and charts from presentation and H1 results. 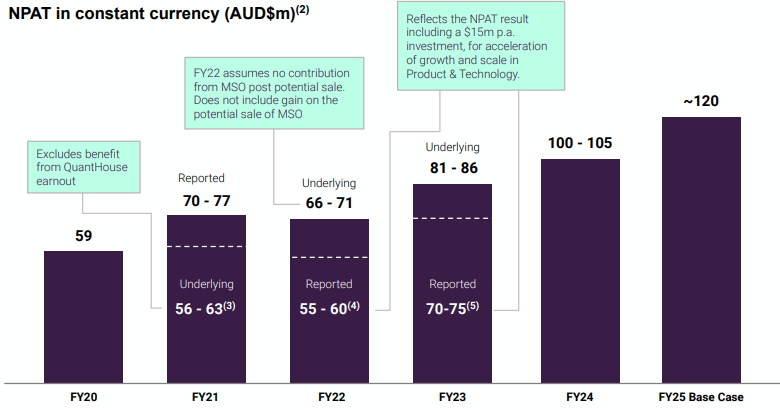