Our tracking portfolio returned 0.2% during September 2021 and 53.5% year-to-date. A detailed performance breakdown is provided below.

We have posted 15 new special situation ideas in September. We also closed 16 cases – most of them profitably and at significant IRR. The key highlights are:

45 ideas are currently active on SSI.

The graph below details the individual MoM performance of all ideas that were active during the month of September 2021. This chart excludes Quick Ideas. 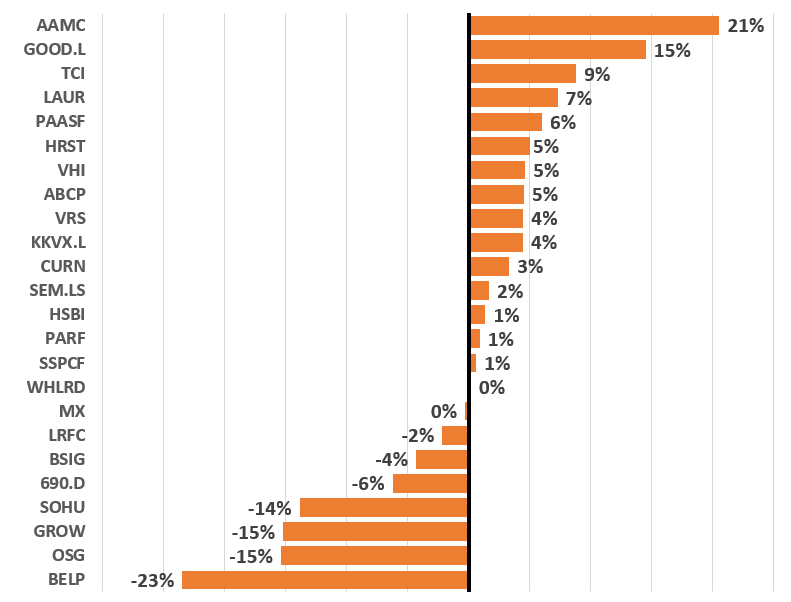 Valhi (VHI) +124% in 1 year
Valhi was a holding company that traded at a discount to BV after the elimination of the preferred equity, increasing the book value per share from -$0.84 to $22.56 at the time. VHI balance sheet was comprised of controlling stakes in listed subsidiaries of Kronos (KRO) and NL Industries (NL) making the sum of parts valuation quite straightforward. Historically VHI had frequently traded at a premium to its BV and the elimination of preferred equity was expected to bring shares closer to BV. The situation offered 100%+ upside. All has played out as expected – it has taken a year for the spread between VHI and its NAV to narrow resulting in 124% return.

KKV Secured Loan Fund C (KKVX.L) +58% In 2.5 Months
This was a liquidation of a small debt fund in the UK with a timeline of 2-3 years and most distributions expected to be front-loaded. New management made substantial write-downs re-evaluating the portfolio during COVID peak, so their liquidation estimates seemed conservative enough. Overall, the new manager’s track record of similar liquidations and the already made progress with KKV gave confidence in smooth process going forward. Front-loaded distributions came larger and faster than expected. The disposal of the remaining portfolio should take much longer and the upside seemed riskier. The idea was closed with +58% in 2.5 months.

Pan American Silver (PAASF) +50% in 8 Months
The situation concerned mining industry CVR with high uncertainty due to some political aspects in a third-world country and potentially extended timeline. In early 2019 one of the major silver/gold players, Pan American Silver, acquired Tahoe Resources. The consideration included a contingent value right exchangeable into 0.0497 PAAS shares upon restart of the Escobal mine – the flagship asset of Tahoe. The restart will be considered effective upon the first commercial shipment of concentrate. The rights were/are due to expire only in 2029. Several recent developments increased the chances of a favorable outcome for CVR holders. The spread between PAASF and PAAS narrowed by half since posting and we closed the idea with 50% gain in 8 months on hedged trade. 58% spread remains, however it might take several years to play out.

Haier Smart Home (690.D) +20% in 9 months
This was an interesting arbitrage opportunity between two classes of shares of the same company listed in Germany and Hong Kong that traded at a wide 50% spread between each other. The company was expected to launch buybacks and potentially delist from Germany fully. However, in 9 months since we posted this, the spread between H and D shares narrowed only slightly and recent actions by the company seem to be opposite from what D shareholders were hoping for. We closed hedged trade with 20% return.

Harvest Oil & Gas (HRST) +6% in 2 Months
Harvest Oil & Gas was a nano-cap failed E&P company in the process of liquidation. All of its assets were sold and the remaining book value was comprised mostly of cash and sellers’ note. Sellers’ note was structured in two tranches, maturing in 2025 and 2027, however, the terms indicated that the repayment could come much faster. Reputable shareholder base and various cost-cutting measures spoke in favor of a well-optimized liquidation process. The new SEC rule for dark stocks made HRST untradeable, hence we have removed the idea from active cases with 6% return in 2 months. The liquidation thesis is still likely to play out as expected, just holders will have difficulty exiting the positions beforehand.

Paradise (PARF) -10% In 2 Years
PARF was an illiquid nanocap liquidation case with shares trading close to the lower range of management’s liquidation value expectations. Core candied fruit business had already been sold. Dowside seemed protected by the conservative value of the remaining plastic business and real estate assets. The major risk of a prolonged timeline came true and even after the company sold all of the remaining assets 1 year ago, shareholders still haven’t received an update on further distributions. IR department was also not responding to requests to share the latest annual report with registered shareholders. Shares became untradeable after the new SEC rule for dark companies came live, so we are removing PARF case from active ideas with 10% loss in 2 years.

Overseas Shipping Group (OSG) -18% in 2.5 Months
Oil shipping company Overseas Shipping Group received a non-binding takeover offer from its second-largest shareholder Saltchuk (17.5%) at $3/share. This seemed to be an opportunistic bid in light of the recovering oil/petroleum shipping industry with plenty of headroom to increase the offer price eventually. However, it appeared that the industry’s recovery will take longer than expected and Saltchuk withdrew the offer, likely due to financing issues. Assuming the eventual recovery current OSG shares price is undemanding, however, as the merger thesis did not work out, we closed the idea with a 18% loss in 2 months.

New Carolin Gold (LAD.V) +20% in 1 Month
Junior gold miner Talisker Resources was acquiring its peer New Carolin Gold at 0.3196 Talisker shares per New Carolin share. The strategic rationale seemed reasonable from a geographical standpoint. As expected, shareholders approved the transaction and the merger closed soon after. The trade resulted in a 20% profit in one month.

Millennial Lithium (ML.V) +9% Upside In 1 Month
Junior lithium miner Millennial Lithium was due to be acquired by Chinese mining giant Ganfeng at C$3.60/share. Major caveat was Canadian regulatory approval (critical materials merger), however, as ML’s assets were not even in Canada, the risk seemed somewhat lower. While the merger was pending, ML received a superior offer and signed a definitive agreement with another Chinese buyer, battery maker CATL, at C$3.85/share. In light of still pending Canadian regulatory approval and limited remaining upside, we’ve closed the idea with 9% gain in 1 month.

Carnival Corporation & Plc (CUK) +8% Return In 4 Months
Carnival Corporation & Plc separate and non-fungible NYSE listings with identical economic/voting interests. Historically, the spread between the listings had been minimal, however, since the start of the covid crisis, it has exploded. The gap was likely explained by the differences in index inclusions and retail investor fund flows. We’ve published the idea when the gap was around 15%. It seemed reasonable to think that the spread should converge eventually, however, there was no apparent catalyst. As expected, the gap gradually narrowed down and we’ve pocketed 8% gain in 4 months.

Ossen Innovation (OSN) +8% in 8 Months
Steel materials manufacturer Ossen Innovation entered into a definitive agreement with its parent company Pujiang International Group to get acquired at $5.10 per ADS in cash. The buyer owned 66% stake effectively securing the shareholder approval. The buyer expected significant synergies and several other aspects indicated that the transaction should be completed as expected. The merger is still pending, but as the spread narrowed the idea was closed with 8% profit in 8 months.

Cambria Automobiles (CAMB.L) +6% in 2 Months
Cambria Automobiles’ management (owned 40%+ stake combined) was stealing the company at a lowball privatization price of £0.80/share. We have reopened this idea after it appeared that certain shareholders are pushing for a higher bid. As expected, the bid received a tiny bump, but only to £.825/share. With the support of major institutional shareholders, the buyer has collected enough acceptances, and as the spread was eliminated. We’ve pocketed a nice 6% return in 2 months.

Banco Santander Mexico (BSMX) -9% In 4 Months
Santander Group intended to take its Mexican subsidiary (owns 91.7%) Banco Santander Mexico private. Initially, the parent initiated the process for a mandatory delisting offer at M$120 in cash + a dividend of M$2.25 per each ADS. The offer required 95% acceptance condition, which seemed unlikely to be achieved as the offer was significantly undervaluing BSMX. Interestingly, one day before the scheduled shareholder vote, the parent has amended the proposed offer from the mandatory delisting to a tender and removed the acceptance condition. Santander Group expected to get the necessary regulatory approvals before the 31st of July, however, no updates were released on this yet. 3 months have already passed with no updates from the parent, so it seems like the privatization/tender is no longer in the cards. 9% loss in 4 months.

Iress (IRE.AX) -13% in 1 Week
Australian trading and wealth management software developer Iress received a non-binding takeover proposal from Swedish PE EQT Fund Management. Buyer’s intentions seemed firm and the offer price had already been bumped two times – the latest at A$15.75/share in cash. Price seemed fair, especially in light of the recent IRE transformation/growth plans. Just before the EQT’s proposal, there were rumors of other interested parties as well. However, the deal failed as parties were not able to agree on a transaction. -13% in one week.

SOHO China (0410.HK) -44% in 1.5 Months
Chinese real estate developer SOHO China announced a voluntary conditional cash offer from Blackstone at HK$5/share. SOHO founders agreed to sell their 64% stake in the company. The price looked favorable for the buyer. The major risk was the interference by Chinese regulators and the steep downside to pre-announcement price levels. Unfortunately, regulators did block the merger and SOHO shares took a dive. 44% loss in 1.5 months.