This is a cheap industrial metals bull cycle play – in a way, a bet for the copper price to remain elevated around current levels. Although there are several other similar seemingly cheap plays across various commodity industries, this one is particularly worth highlighting as the company has no leverage, has relatively safe business operations, and, most importantly has already started to return the newly-minted cash to shareholders. Overall, we think this is a really interesting case with a large upside, however, as our knowledge in the cyclical copper industry is limited and there are certain political risks involved, we’ve posted it in the Quick Ideas section.

Amerigo Resources processes copper mining tailings for the largest copper mine in the world – Codelco (Chile). The business is much more stable/safe than a typical mine and operates more like a low capex “copper factory”. Despite that, the stock currently trades at just 3x EBITDA, significantly below most miners, and is depressed likely due to being limited liquidity, Canadian micro-cap with no dividends/buybacks since 2012, recently failed expansionary investments, and exposure to volatile Chilean political situation. However, some of that is about to change – the company is a direct beneficiary of the copper industry tailwinds, is generating loads of cash, and just recently started returning capital to shareholders. The tender offer for 11% outstanding shares was been announced last week and management plans to finally reinstate dividends in Q4’21. At current earnings and share price levels, the expected dividend yield would be around 12% – as such, dividend announcement would be a catalyst for ARG to re-rate. Besides that, the market likely misunderstands certain nuances/issues regarding the Chilean political risks – uncertainty will be lower after the Novermber’21 elections. Insiders own 28%+. A re-rate to 4x EBITDA multiple would result in 75% upside from the current prices.

ARG is a pure-play copper (and small amounts of molybdenum as a by-product) producer from fresh and historic tailings of Codelco. Codelco is located in Chile and is state-owned. It is also the largest underground copper mine with 11% of global production and 10% of known reserves. ARG has been in partnership with the mine since 1992 and has contracts until 2037. The operations are run through its Chilean copper factory – MVC. MVC produces about 60m+ tons of copper annually. CAPEX runs at just $6m annually.

The company trades on TSE and US OTC. Financials are provided in US dollars. 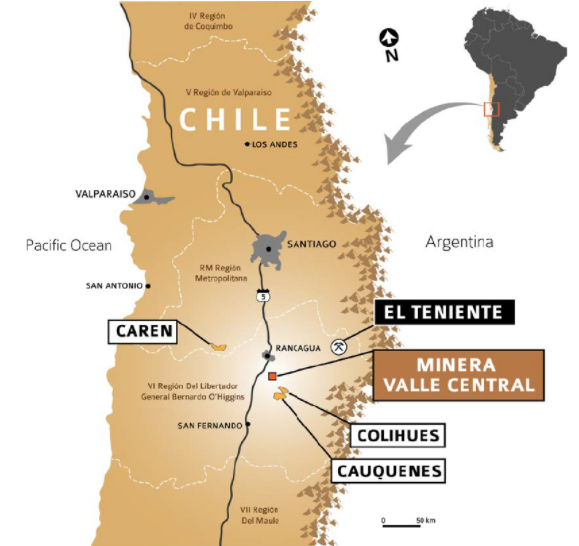 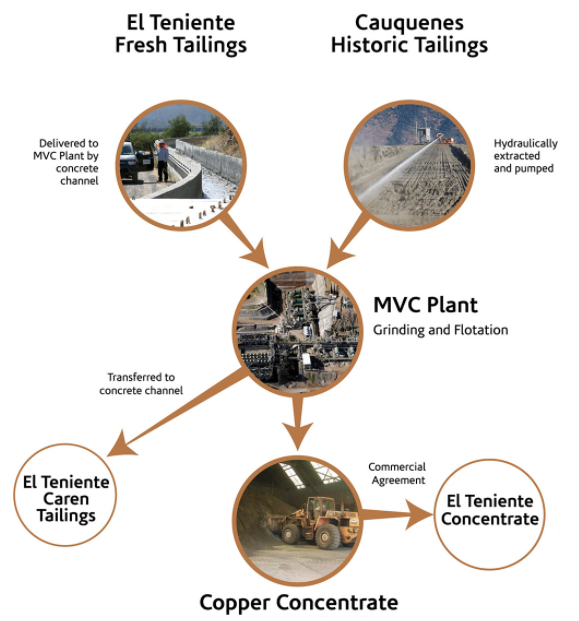 More background on ARG business can be found on this VIC write-up.

The whole copper mining industry is in bull cycle at the moment as copper prices are hovering around all-time highs after the post-COVID economic rebound/global ESG initiatives/EV sector growth has hit the industry unprepared. More details on the copper industry can be found here and here. Copper price surged from the pre-COVID levels of $3/lbs to over $4/lbs in Feb’21, reached new all-time highs of $4.74+ in May, and now hover around $4.20/lbs. The general consensus is that the overall increased demand and ESG/EV investments should support the price at current levels – copper futures show prices above $4/lbs all the way to 2026 (Dec’22 at $4.19/lbs and Dec’23 at $4.06/lbs).

ARG financial performance depends on the copper prices, but it is also highly predictable. EBITDA guidance at different price points is provided below (presentation):

So the company should earn about $61m – $70m in EBITDA on $205m EV this year. Worth noting, that this could be conservative as so far ARG generated $23m both in Q1 and Q2 2021 for an H1’21 total EBITDA of $46m. H2’21 is expected to be impacted by annual maintenance shutdowns, however, the negative effect from these should be limited as it is only 8 days in September and 1 day in October. So unless I’m missing something big, the company could be earning $85-$90m EBITDA at the current run-rate, however, for the sake of conservatism I’m using the guidance numbers ($61-$65m EBITDA) for the calculations below.

Management has been talking about returning capital to shareholders for quite a while now and last quarter, a major condition – debt restructuring due to former loan constrain on cash utilization – has been completed, immediately adding $15m of excess cash and resulting in a total of $35m cash available for distributions. Last week, ARG announced a tender offer for C$25m (US$20m) or about 11% of its outstanding shares. The tender is priced at C$1.18 – C$1.30/share and ARG now trades close to the upper limit. It was also noted that the board is weighing further capital return options. A full dividend/capital return program was promised to be announced in Q4’21.

Going forwards, management expects to distribute 50%-60% of its previous fiscal year’s FCF with the condition being that $15m operational cash must always remain on the balance sheet. If the copper price stays around these levels, then after deducting taxes, CAPEX and debt service, the annual FCF is expected to amount to around $37m-$41m. Assuming the current tender will be priced at the upper range and the remaining $15m of excess cash is also returned to shareholders shortly, then the expected dividends would yield 12%-13% at the current price.

The company hasn’t decided on the exact plan yet, i.e. whether it would be paid annually/semi-annually, however, the decision to launch the program seems firm. From Q2 call:

Amerigo’s Board is actively working on determining a sustainable dividend policy and we expect to be able to issue an announcement within this quarter. Our intention is not to sit on a pile of cash indefinitely. A payout policy is of significant strategic importance to the Amerigo’s Board of Directors.

That is – yes, that is part of the discussion that is ongoing. It’s not just determining the dividend, the share buyback, or the combination of both. It’s when, for how much, what form of dividend, et cetera. So all of those elements are being discussed and analyzed.

One of the major overhangs on ARG is the volatile political situation in Chile. Since the massive anti-corruption/inequality riots in 2019, the situation hasn’t been very stable. The country wants change and in Oct’20 voted to rewrite its previous military-dictatorship-based constitution. Besides that, one of the calls for a change is to significantly increase taxes on the mining industry. More details can be found here, however, the main point is that if the bill is passed, depending on the production size, some mining companies would see their taxes increased by up to 80% with the profit margins dropping by up to 50%. The bill has already been approved by the lower house and Senate’s mining committee and is currently being reviewed by the Senate (upper house). Two-thirds approval will be required. The vote was initially set for July, however, it got deferred. Apparently, if Senate approves the bill, under the current constitution president can block/veto it. The current president is apparently against the new mining tax bill. However, this November Chile will have its general elections for the new president, Senate and Congress. Two current presidential election front-runners are the affiliate of the current conservative party (which opposes the new mining tax bill) and a relatively young center-left-wing representative, who speaks in favor of taxing the mining industry to finance various social projects and support the COVID-19 impacted economy. While the outcome is still uncertain, there is a chance that Chileans will not support the conservatives as the party did not even manage to get 1/3rd of seats in the recently elected new Constitution Assembly, which is supposed to draft the new constitution.

All of this political uncertainty is likely weighing down on ARG price. Canada listed microcap with no analyst coverage and operation in Chile is most likely viewed as having significant exposures to Chilean mining industry risk. However, it is important to understand the risks for ARG are much lower. First of all, Codelco is a state-owned mine, which generates significant tax income for the government, so it will keep running no matter the tax increase (the new bill will mostly impact private/foreign-owned operators). Secondly, the CEO has clearly stated on the latest call that the new tax regime will not impact the company as tailing processors are not miners (see quote below). Thirdly, the change will also not affect the current partnership with Codelco in any way either.

My uneducated guess is that once the current turmoil settles down, no matter the election outcome, both Codelco and ARG will continue to operate without any impediments. After dividends are announced in Q4’20 and the market realizes that the regular dividend is fully supported by stable cash flows, the stock will be quick to re-rate.

Some quotes from Q2 call:

CEO: However, as I mentioned in our prior call, MVC is not subject to the Chilean mining royalty tax, because it is not considered a mining company within the scope of this tax and we expect to continue to be unaffected in the future.

Analyst: But I’m wondering, if a change in taxation on Codelco would be the type of event that might reopen the contract?
CEO: No it is not the type of event that would reopen the contract and when we’re talking about whether any tax changes would affect Codelco? The answer is, no. Codelco essentially, returns all of its earnings to the Chilean state irrespective of, how it returns it via first income tax mining royalty tax or a special tax that is exclusive to Codelco. It is irrespective to them where in the order of taxation you put it it’s all part of the same bucke

There is one more potential political caveat, that I haven’t mentioned above as I believe the chances of it materializing are fairly low. The Chilean Senate is currently reviewing a glacier protection bill that would limit/restrict mining operations near glaciers. A similar bill was passed in Argentina back in 2010. Codelco stated that if the bill is passed, 40% of its output is at risk. The bill was introduced back in 2014 and with the vote pending since October 2019. Senate is still reviewing the bill.

Unlike in Argentina, copper mining is one of the major supports to Chile’s economy and has generated 10% of the GDP over the last decade, whereas total mining GDP accounts for just 0.25% of Argentina’s GDP. Codelco alone produces 30% of the total Chile copper, so the glacier bill would instantly cut almost 1.5% of the Chile GDP from Codelco alone, and potentially much more as there are likely many other mines that operate near glaciers (82% of all South Americas glaciers are in Chile).

The bill has already been passed around for a long time, which suggests that the current right-wing conservative party doesn’t support it. Left/central-left wing coalitions are talking about reinvigorating the economy through social projects/programs and mining tax increases. Passing the glacier bill will do just the opposite as Chile is already highly dependent on state-owned mines, especially, when the new tax scheme will likely put many private/foreign-owned mines out of business.

Finally, I would like to mention that we are aware that there has been selling pressure on our equity. During this year, approximately 30 million to 33 million shares of Amerigo held in two significant blocks have been sold into the market. These are not sales from Directors or Management of Amerigo, but from long-term investors who came into the stock at a price of CAD 0.28 per share in 2009, shortly after the global financial crisis. These investors have fulfilled their personal investment cycle with the company and I have no reason to believe their actions reflect the lack of faith in Amerigo. Whenever we are aware of this type of interest in selling, we will always look to accommodate crossing blocks to minimize the impact on Amerigo’s share price.