Our tracking portfolio returned 3.8% during October 2021 and 59.3% year-to-date. A detailed performance breakdown is provided below.

We have posted 9 new special situation ideas during October. We also closed 15 cases – most of them profitably and only one was closed at a small loss. The key highlights are:

39 ideas are currently active on SSI.

The graph below details the individual MoM performance of all ideas that were active during the month of October 2021. This chart excludes Quick Ideas. 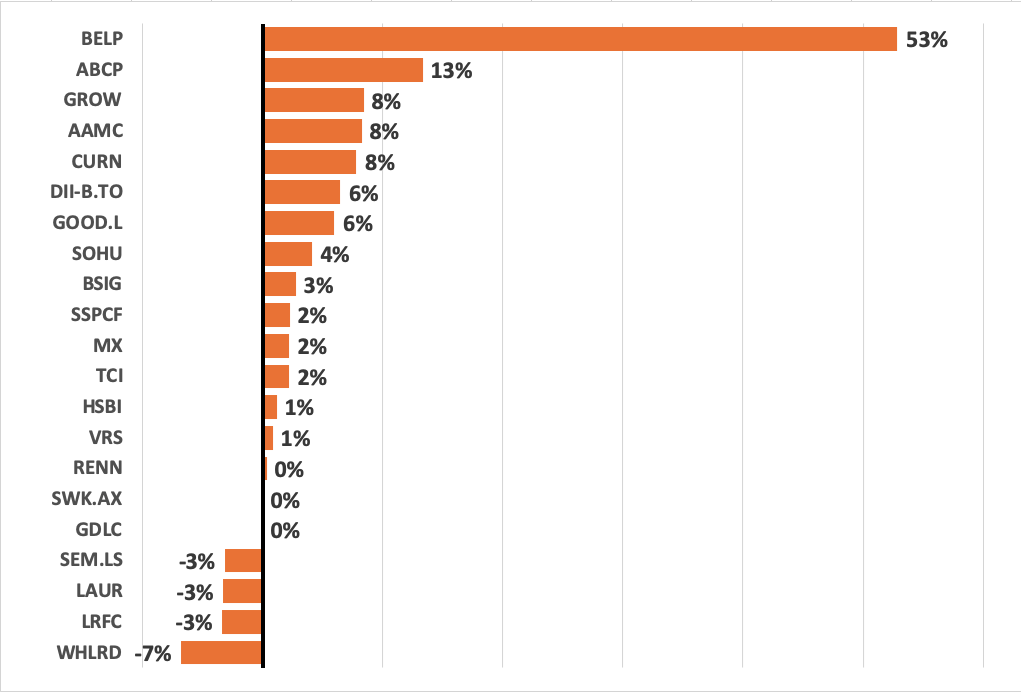 Belpointe REIT (BELP) +20% in One and a Half Months
Belpointe REIT was undergoing a structural reorganization and was due to be merged into its affiliate Belpointe PREP and uplist to NYSE. Shareholder consent had already been received and the closing was only subject to some formalities. During this process, BELP shares shot up significantly above NAV ($160+/share vs $100/share NAV) for no particular reasons. BELP had most of its balance sheet still in cash and filed a prospectus for continued issuance of new units ($750m in total) strictly at NAV, which was fixed till the end of 2022 at $100/share. Basically, everything indicated that shares will promptly reverse to $100 once trading shifts to NYSE. With plenty of cheap borrow available, the situation offered a great shorting opportunity. All played out as expected and we are closing the case with 20% gain in one and a half months. Worth noting that the price in the write-up was the low point and BELP shot right up and stayed at much higher levels – most who entered this arbitrage realized gains of 30%+.

Good Energy (GOOD.L) +11% in Two Weeks
UK renewable energy supplier Good Energy received a hostile takeover offer from its peer and largest long-term shareholder Ecotricity. The buyer owned 25% stake and had already made 4 bids. Good Energy management rejected all of them but hinted they would be willing to sell at a slightly higher price. The spread to the offer price widened significantly due to the sudden onset of the energy crisis in UK, which forced some of GOOD peers to file for bacruptcy. Both the buyer and the target indicated they are sufficiently hedged and elevated energy prices will not have an impact on financial performance. GOOD also announced a special dividend equal to a quarter of the market cap if shareholders reject the takeover attempt. At the time the spread to the last offer stood at 30% with additional upside from potential offer increase. Eventually, the hostile takeover did not succeed as the 50% acceptance threshold was not reached. Despite this, the arbitrage was closed with 11% gain in two weeks.

Heritage Southeast Bancorporation (HSBI) +6% in 6 Months
Heritage Southeast Bancorporation was due to be taken over by VyStar Credit Union in an all-cash transaction at 1.68xTBV multiple. Shareholder distributions were/are expected at $27/share in late 2021/early 2022. The case offered 9% upside at the time of the write-up and similar bank takeovers by credit unions suggested successful closing is likely. Shareholders have approved the transaction and the spread eventually narrowed to 3%. Due to still pending regulatory approvals after 6 months and small remaining upside we decided to close the position with 6% gain.

Golden Valley Mines (GZZ.V) +19% in 1.5 Months
Gold Royalty was due to acquire Golden Valley in all-stock merger. GROY seemed like a credible buyer with a track record of accelerating acquisition spree to grow its royalties’ portfolio and was unlikely to withdraw the offer. Support of 33% of minority votes had been secured upon signing the definitive agreement. 28% spread at the time seemed excessive – part of it was likely explained somewhat expensive hedging (GROY borrow at 25%) as well as cross-border nature of the merger. The spread has gradually narrowed to 4.5% without any further news on the transaction. The meeting date is scheduled for the 29th of October. While it is very likely that shareholders will vote in favor, it might take another month before Canadian shares get converted into GROY stock. Due to expensive GROY borrow it no longer pays off to keep the position open. The idea resulted in +22% gross return and 19% after deducting borrow fees.

Rifco (RFC.V) +15% in 1.5 Months
Rifco, a small Canadian subprime auto lender, received a non-binding proposal from management to take the company private at C$1.15/share in cash. The deal was opportunistic but seemed likely to complete given management’s firm intention to buy the company and support from 64% of shareholders. There was a possibility of another bidder stepping in and as expected, Rifco received a superior offer from a US-based peer at C$1.28/share. Interestingly, management chose to support and the spread was eliminated. We marked higher than expected +15% gain in 1.5 months, although liquidity hasn’t been great in this stock.

iCar Asia Limited (ICQ.AX) +14% in 2 Months
ASX-listed auto classifieds company iCar Asia received non-binding offers from Chinese peer Autohome at A$0.50/share and Malaysian peer Carsome at A$0.55/share. Carsome also entered into agreements with ICQ largest shareholder Catcha Group to acquire its 30% stake. The higher bid looked serious and the proposal came as part of its market share consolidation strategy in Southeast Asia before the upcoming listing through SPAC. ICQ operated in virtually the same markets as Carsome (Malaysia, Thailand, and Indonesia) and the transaction seemed to make a lot of operational sense. Spread stood at 22% at the time. Both parties reached a definitive agreement at a bit lower consideration at A$0.53/share in cash. As a result, the spread narrowed down and the case was closed with a 14% return in 2 months.

Enzo Biochem (ENZ) +11% in 10 Months
Enzo Biochem was a poorly run company, which over the years has significantly underperformed its peers and destroyed shareholder’s value. However, all was due to change with the involvement of two activist funds – Harbert Discovery Fund and Roumell Asset Management, which collectively owned 18%. The activists’ wanted to oust the entrenched CEO and the campaign partially succeeded as they managed to vote the CEO down in the meeting. However, the board rejected CEOs resignation and kept him in the company under a different role. Activists claimed that there are parties interested in buying ENZ. Subsequently, Enzo launched strategic review process, however, no updates had been released for 7 months since then and only one activist seems to remain active. We have closed this case with 11% gain in 10 months.

Abitibi Royalties (RZZ.V) +10% in 1.5 Months
This merger came as a package deal with the GZZ takeover outlined above. Gold Royalty was acquiring gold royalties peer Abitibi Royalties in exchange for 4.6119 GROY shares. 17% spread at the time. The buyer had been running an acquisition spree and seemed highly interested in Abitibi’s core assets – royalties in Canadian Malartic Mine (largest open-pit mine in Canada). Shareholder approval was likely to pass given the all-time high price and support from 65% of shares outstanding. The spread has now almost closed and we are marking +10% return after borrow fees in 1.5 months. Overall, both the RZZ.V and GZZ.V trades have delivered solid returns with limited risk in a short period of time.

Edgewater Bancorp (EGDW) +10% in 1 Year
This was a tiny (<$20m) ex-mutual bank acquisition by a credit union. Edgewater Bancorp was subject to an acquisition by United Federal Credit Union (private). Final consideration was a bit uncertain but was estimated at $39.47 to $43.22 per EDGW share in cash – offering 5%-15% upside. Considerable multiple to BV was likely to secure shareholder approval. The merger closed as expected, but interestingly, EGDW still remained tradeable for half a year until the final consideration was announced. It ended up at $41/share + up to $2.44/share potentially to be distributed during 2022. The idea is closed with a 10% gain in a year, with up to 6% still to be distributed in 2022.

Isabella Bank (ISBA) +$124 in 1.5 Months
Michigan-based Isabella Bank announced a tender offer for 10% of outstanding shares (with odd lot provision) at a price range of $23.00 – $27.00. ISBA was a cheap bank with accelerating profitability due to improved financing structure. Trading volume was quite low but has increased after the tender announcement. As expected the tender got priced at the upper limit, resulting in a quick $124 profit for odd-lots. Potential M&A target thesis is still valid, however, the timeline is uncertain.

Safeguard Scientific (SFE) +$45 in 1 Month
Liquidating VC fund Safeguard Scientific announced tender offer for 20% of its outstanding shares. The tender range was set at $7.9 – $9.0/share and shares were trading in the middle of the range. Directors with 4% ownership were not tendering. Participating with a larger position seemed risky – despite a fairly large tender size and company trading materially below liquidation value, SFE trading volume was quite limited on most days and larger shareholders could’ve easily filled the whole allocation. Eventually, the tender ended up being priced at the upper limit resulting in a quick $45 profit in 1 month for odd-lot accounts. Aside from the tender, the liquidation case is still valid and offers a potential upside of 30%+, but the risk is high and timeline is uncertain.

Royal Financial (RYFL) +4.5% in 1.5 Months
Nano-cap bank merger with an unusual odd lot provision. Finward Bancorp was acquiring Royal Financial. RYFL shareholders, who owned 101 shares or more were able to choose between $20.14/share in cash or 0.4609 FNWD shares, subject to a total maximum cash proration of 35%. Owners of less than 101 shares would receive cash only. Aside from this, the deal seemed like a standard merger of two community banks in close geographical proximity – clear strategic rationale and high operational synergies. Spread stood at 6.5% with closing expected in Q1 2022. As the spread narrowed down to 2% we closed the idea with 4.5% gain in 1 month.

Corning Natural Gas Holding (CNIG) +4% In 6 Months
Natural gas and electric utility services provider Corning Natural Gas Holding signed a definitive merger agreement with Argo Infrastructure Partners (PE firm) at $24.75/share in cash (5% spread). The buyer was reputable and well-financed, while the timing of the takeover was slightly opportunistic. Significant ownership by insiders and activists, none of who opposed the transaction, suggested that shareholder approval should pass. Regulatory were unlikely to impede the merger either. As expected shareholders approved the merger and the spread narrowed to 1%. we closed the idea with 4% gain in 6 months.

Ferro Corporation (FOE) +3% in 1 Month
Specialty materials manufacturer Ferro Corporation was getting acquired by its private peer Prince International at $22/share in cash. Spread stood at 8%. Ferro’s shareholders had already approved the transaction. The buyer seemed credible with the new owners (PE group) having a number of portfolio investments in the same industry. However, we have apparently overestimated the likelihood of antitrust approval and following members’ comments removed FOE from the active ideas.

Genesis Emerging Markets Fund (GSS.L) -7% in 3 Months
Genesis Emerging Markets (now Fidelity Emerging Markets Fund) was looking to launch a tender offer for 25% of its outstanding shares at 98% NAV. Large tender size and recent shift to new (potentially better) investment manager seemed likely to limit the proration, while the exposure to NAV seemed not much of a risk due to limited timeline. However, turned out we were very wrong – almost all of the shareholders tendered and NAV declined slightly eliminating any upside from the accepted shares. The idea was closed with 7% loss in 3 months.