This is merger arbitrage in Canadian cannabis industry. Vertically integrated cannabis player Sundial Growers is acquiring liquor and cannabis retailer Alcanna. Consideration stands at 10.69 SNDL shares per CLIQ share. Plenty of borrow for hedging is available at a 10% rate (should net about 1% from the current spread). The combination offers a strong strategic rationale amidst the increasingly competitive cannabis retail market. The buyer is flush with liquidity and is pursuing growth through acquisitions strategy. Valuation wise it looks like SNDL is getting a bargain and is unlikely to walk away from the merger. Shareholder consent is expected given the support from the largest shareholder/activist – the combined stake together with management is 12%. The situation offers a relatively short timeline with an attractive IRR.

Downside to pre-announcement levels (trading update on the 15th of Sep) is about 11%. However, CLIQ stock started appreciating in the beginning of September, which forced the company to issue the trading update. Thus the downside in case transaction breaks could be larger. Moreover, Q3 reports of both firms are expected shortly – 11th Nov’21 for SNDL and 12th of Nov for CLIQ.

The merger needs to be approved by 2/3rds of CLIQ shareholders. Rationale on why this is likely to pass is outlined below:

Same-store cannabis sales does not provide a useful comparison between the current period and the prior comparative period due to the fact that cannabis retail is an emerging industry and there were a limited number of stores open in the Alberta market during the prior year period, whereas in 2021 the number of competitor stores has increased significantly year-over-year.

Look, there’s no question that the retail landscape is highly competitive and we actually expect a significant amount of attrition in the space. So not all operators are going to be successful here. I think on one of our previous calls, we talked about hitting a saturation point in retail.

We expect significant consolidation and actually quite a bit of bloodshed in the retail segment in Canada. And so we are excited to be competing.

From the regulatory perspective, the only concerning thing re this merger seems to be a large market share in Alberta – 106 stores combined, which is 15% of the market licenses wise. 15% used to be market share cap in Alberta, however, this cap was lifted in Oct’20, thus regulatory pushback is unlikely.

The combined market share of authorized stores in Ontario should be around 4%.

CLIQ is the largest private liquor retailer in Canada with 171 stores (mostly in Alberta). Alcanna’s liquor operations are rather stable and profitable generating around $16.4m annual FCF (TTM).

In October 2018, the company started its own retail cannabis operations (Nova Cannabis), which was spun off in March’21 through a reverse takeover. CLIQ still retains a 63% stake in Nova Cannabis, which is now listed as NOVC.TO. Alcanna provides corporate management services to Nova for a fixed annual fee of C$1.25m. Nova is quickly growing its retail store count and currently has 62 locations, mostly in Alberta. The business focuses on the low-price value/discount market segment. The cannabis segment is still unprofitable and burns cash. CLIQ stock price has been pressured ever since the company has entered the cannabis business in 2018.

Both segments benefitted from the COVID-19 outbreak in 2020. CLIQ has redeemed all of its notes this year and doesn’t have debt anymore.

On SOTP basis liquor business looks cheap and suggests SNDL might be getting a bargain. CLIQ currently trades at C$268m EV, out of which C$120m is NOVA stake. This leaves the rest of the company (liquor+corporate) at C$148m. During H1’21 liquor segment generated EBITDA of C$54m (before remeasurements and provisions). Management states that this is up 10% vs 2019 levels and expects at least part of the COVID tailwinds to stay permanent. Assuming liquor segment run-rate EBITDA of C$50m and deducting C$20m in normalized corporate overhead (C$3m expenses in H1’21 were one-off), puts the remaining company ex. NOVA stake at 5x normalized run-rate EBITDA. 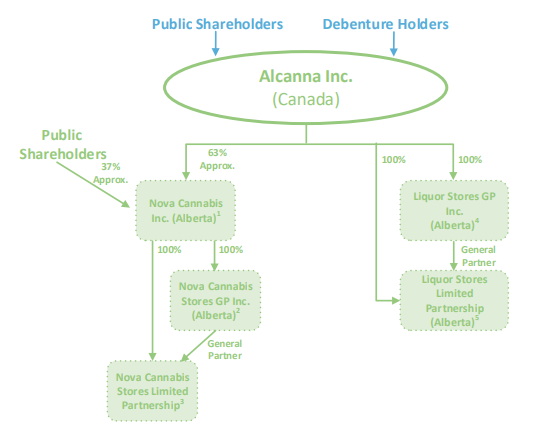 More background on CLIQ can be found in this VIC write-up here.

SNDL is a failed cannabis cultivator, which over the years moved from wholesale to selling its own brands. The attempt to target all price segments ultimately failed to stop revenue decline. SNDL IPO’ed in August’19 at $13/share and had a bad run since then due to the Canadian cannabis crisis, high cash burn, COVID-19 outbreak, etc. However, this year proved to be extremely lucky as SNDL became one of the squeeze targets of Redditors/WSB and saw its share price skyrocket from US$0.60/share to US$3/share during the first two months of this year (has already returned to previous levels since then). Management used this opportunity to raise almost US$1bn in cash and now is aiming to use this cash to revive company’s growth. SNDL has already acquired one of the fastest-growing retail franchisors Inner Spirit Holdings (Spiritleaf brand) for around C$131m. The merger was covered on SSI.

Sundial has also created an investment division aiming to capitalize on various funding issues in the cannabis industry, which is still strongly overhung by regulatory restrictions. Recently SNDL has started a 50/50 JV with SunStream Bancorp to provide lending, equity, and hybrid funding to cannabis firms. The company intends to expand these operations internationally and will likely focus on the US market. As of Q2, SNDL injected C$253m in the JV and these investments have already generated c. 13% annualized returns. In the recent Q2 call, it was mentioned that the company has lined up C$1bn+ investments pipeline for the JV. Aside from the JV, SNDL intends to deploy cash on M&A and various minority ownership investments. The company still has C$743m of unrestricted cash balance (and no debt).

The strategic rationale here is pretty straightforward – amidst a highly competitive market, SNDL is buying one of the leading (in terms of store count) low-price cannabis retailers in Alberta, which will increase the number of SNDL stores by 60%. Most of the locations of both firms are in Alberta and Ontario. SNDL’s cultivation capabilities should definitely add some synergies to Nova’s retail footprint. CLIQ has extensive 25-years of experience in the retail business (although mostly liquor) and SNDL expects to deploy their playbook of winning market share through lower margins/M&A. It also intends to use CLIQ’s management services platform (which it uses for Nova) for the recently acquired Spiritleaf stores. Overall, the buyer expects the synergies to add C$15m of additional annual EBITDA – quite significant as post-ISH merger, pro-forma SNDL should be generating something around C$5-10m annual EBITDA, whereas CLIQ’s cannabis segment is still operationally unprofitable.

Cashflows from CLIQ’s liquor business (C$16.4m TTM) will provide financial support for further consolidation/growth of the cannabis business and development of the investments business. 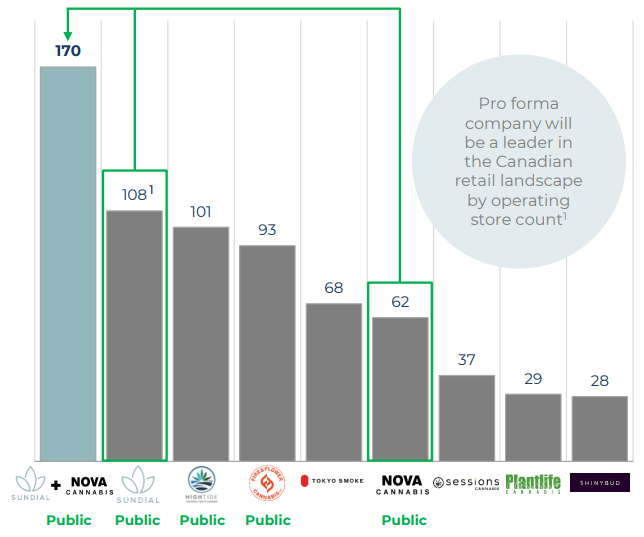 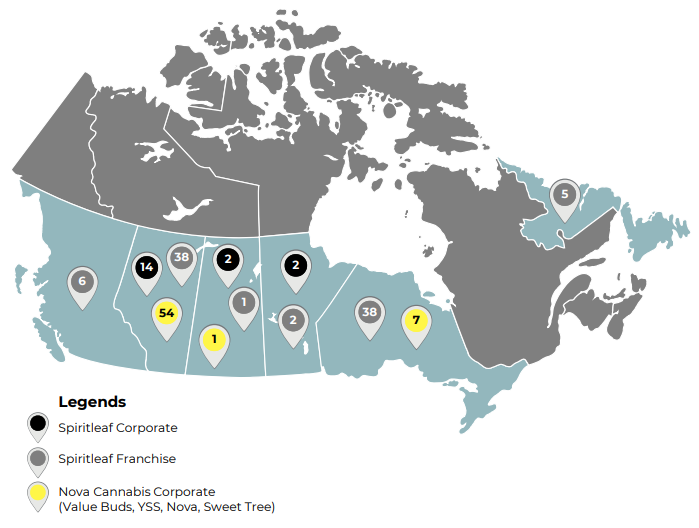 Despite the arguments outlined above, the spread likely exists due to the pending shareholder approval (on top of the usually larger spreads for merger arbitrages in the cannabis space). There are a few caveats worth mentioning.

Valuation of the liquor business at 5x normalized run-rate EBITDA seems quite low for a rather stable, cash flow generating business. For comparison, a much smaller and much more levered peer Rocky Mountain Liquor trades at 5.2x H1’21 run-rate EBITDA. Thus some shareholders might consider the offer price too low. However, merger support by the activist with 3 seats on the board and the absence of any other 10%+ holders limits the chances of shareholders opposing the merger.

Merger consideration is in Sundial stock. Since the initial Reddit-driven squeeze at the beginning of the year, SNDL volatility has been very limited, however, SNDL is still the 4th most widely held stock on Robinhood and there are still plenty of commenters trying to pump the stock on SA/Twitter/Stocktwits. Aside from hedging risks related to this, CLIQ shareholders might consider SNDL to be overvalued at current levels. SNDL trades at EV of around C$1bn, whereas its cannabis business is expected to generate pro-forma revenues of only C$80m (albeit Spiritleaf is growing rapidly). Investment business also focuses on the cannabis industry. SNDL management’s track record is questionable although cash raise during Reddit-driven squeeze was very timely.

And to finish with a positive – exposure to the U.S. federal legalization decision is limited as the merger will close before that. Even if some bad news is released until then, the effect might still be limited as SNDL has now entered the cannabis financing business, which should actually only benefit if the U.S. rejects legalization.