This idea was shared by Charlie.

This is a very tiny ~£10m UK-based all-stock merger on the AIM exchange. ARDN shares are not available through IB – so please check if the idea is actionable to you before reading further. Current spread stands at 17%, however, this might not be accurate as buyer’s shares traded only for 1 day after the merger announcement and then got voluntary suspended while the buyer is searching for a new corporate advisor. Trading will resume after a new advisor is appointed. Before the halt, there were 100k shortable shares available on IB.

Law firm Ince is taking over Arden Partners, its own corporate advisory partner in an all-stock transaction for 0.583 Ince shares per every Arden share. Consent from 75% of ARDN shareholders is required with 45% (including a 15% owned by management) already supporting the transaction. The buyer has a track record of similar mergers and is unlikely walk away from this strategic takeover. More details on the merger should be made available in the scheme document due on the 19th of November. Shareholder meeting is expected to take place in Q1 2022 and the merger will likely close shortly after that. Downside to pre-announcement levels is around 15%.

The main risk is that Ince’s shares will open at a lower price once the trading resumes and the spread will be significantly narrowed or eliminated. It’s definitely possible – trading closed at £0.47 and the upside will be eliminated if share price drops to £0.40/share. However, I think there are substantial points in favor of the spread remaining large as well:

Arden is a corporate adviser and multi-service stockbroker focused on small/mid-cap clients. Its corporate finance capabilities include M&A, corporate finance advisory, broking, sponsor, and NOMAD services. Arden has 40 public clients and approx. 60 public companies under research coverage. Arden’s financial performance is in a downtrend and the company is unprofitable due to a lack of scale and regulatory/Brexit/COVID-19 pressures. In 2017, Arden tried to make a turnaround, hired a new executive team, and raised £5m. However, the efforts failed as revenues spiked for only one year and then continued to steadily deteriorate afterwards. The company hasn’t paid any dividends since 2018 (and that was 1p only).

Ince provides legal services, including accounting, financial services, consulting, and pensions advice. Compared to Arden, Ince is a much bigger firm, with over 1000 corporate clients across public and private markets, and has been consistently profitable over the years. Ince operates a roll-up business model and has already acquired 14 complementary businesses since 2017. Most of Ince’s acquisitions are smaller/similar in size to ARDN (e.g. takeover of Ramparts Corporate in 2019 for £4m). The company claims to have developed a  technology platform that allows quick integration of new acquisitions. This resulted in massive revenue growth from £24m in 2017 to £100m for the year ending March’21. The company has been consistently paying dividends (ex. one-off FY21, but will pay interim FY22) and has recently adopted a medium-term policy of distributing 20% of post-tax earnings to shareholders each year as dividends (subject to the Ince Group’s overall forecast cash requirements).

The merger with ARDN offers several strategic benefits. In September’21 Ince transformed its James Stocks brand into a new Ince Corporate Finance division providing corporate finance advisory services. ARDN takeover is expected to strengthen and accelerate the new division. It will add expertise in public company advisory services (currently the division focuses only on private clients) and wealth management services. Arden currently holds a list of over 40 retained public corporate clients, where there is little existing overlap with Ince, resulting in an opportunity for cross-selling of legal, consulting, and corporate advisory services. The transaction is also expected cost-saving synergies of ~£1m per year achievable within 3 years post-merger (combined overheads are around (£21m). As stated by Ince’s CEO:

This deal is driven by client need. Clients in the UK and overseas are telling us that they want to streamline their advisory relationships whilst being able to access the London capital markets. This deal brings best in class professional services and investment banking together.

So far the company has received merger support from 44.5% of shareholders, including 15.1% of management’s stake. Here’s a list of all ARDN’s major shareholders: 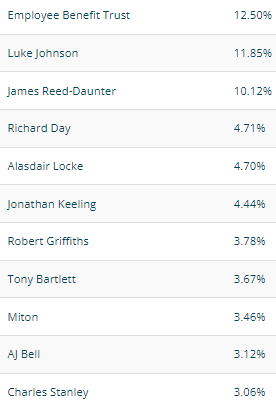 Luke Johnson owns 11.85% and used to be ARDN’s chairman until 2018. Johnathan Keeling holds 4.44% and is an ex-director of ARDN. Both of these stakes are not included among supporting shares, however, I think it is highly likely that both ex-directors will join their ex-colleagues and support the merger as well. That would put the merger support at around 61% – very close to the required threshold of 75%.

The remaining shareholders are likely tired from the current management’s underperformance and will probably choose to switch to a larger, more liquid peer with a more aggressive management team.