This idea was hinted by Nate.

This is a fairly speculative idea on the expectation of a near-term announcement of a tender offer at a premium to current prices.

Dundee Corporation used to be one of those long-hated stocks that are now virtually forgotten/ignored by the market. It is a holding company that trades at a 62% discount to reported BV and a 30% discount to cash and public investments, meaning that all of the private investments come for free. The company is in the prolonged turnaround process but has taken a clear direction to monetize non-core assets and return cash to shareholders. Over the last 1.5 years, Dundee has already done 3 major buybacks – all of them shortly after the completion of substantial asset sales. Recently the company closed sale of a major private non-core asset at about 1x BV and is now sitting on a pile of cash (approximately equal to the market cap). Promptly after closing, management updated the corporate presentation highlighting current undervaluation much more aggressively – something that it has not done before. The overall set-up indicates that we might expect a large tender offer in short term. Management owns 8%+ economic and 79% voting power.

Q3 results are due next week and I wouldn’t be surprised if an update on the buyback plan was announced simultaneously. Dundee’s paid-up capital is way above current price levels, meaning that non-resident investors would not be subject to withholding taxes in case of the tender offer.

The whole investment thesis is summarized by the management in these two slides from the updated presentation: 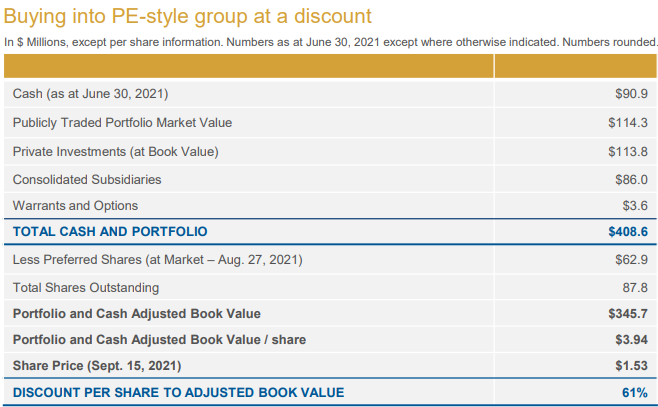 The slide above wasn’t included in the previous presentation – it seems that management is finally starting to be vocal about the undervaluation.

Once again, the idea is speculative and there are several risks/caveats involved:

The downside seems to be protected fairly well at these levels, as the share price has settled at around 60%+ discount to BV for quite some time already. So even if the tender doesn’t materialize, I expect share price volatility to be limited.

Dundee was founded and is still controlled (8% economic, 79% voting power) by Canadian billionaire Ned Goodman and his family. The company focused mostly on the mining sector and did really well/had many major wins before the GFC. After that, Goodmans made heavy bets on precious metals and hyperinflation, which did not work out. From 2011 onwards the company started expanding its investments into various other industries. The strategy failed, resulting in a messy portfolio, many unsuccessful ventures, and extremely high overheads. This caused Dundee share price to decline from C$21/share in 2014 to C$1-C$1.50/share levels over the last few years. However, in 2018 Ned’s son Johnathan returned to the wheel (he previously quit as a CEO in 2014 before the stock crashed) and began a major turnaround program. The portfolio was simplified from over 100 investments to about 30,staff numbers and corporate expenses were significantly reduced – overheads declined by 50% to a current run-rate of C$10m. Management now aims to return to its initial focus on the mining sector and accelerate the monetization of non-core assets. At almost every press release the CEO constantly repeats that they are now highly focused on further cutting G&A expenses rationalizing legacy portfolios and monetizing non-core assets.

The company has recently done 3 buybacks:

Given that pref shares are already trading at/above the previous tender price for series 2, it’s likely that any upcoming tender will be done for the subordinate shares instead of preferreds.

Over the last few months, the company has completed (here and here) a sale of its major non-core asset Blue Goose (production and sale of natural beef) at 1x BV or $76m gross proceeds.

Some comments on valuation

The company’s financials are still somewhat messy and a substantial amount of the portfolio is in private investments. However, at current share price levels, the downside is protected fairly well by pro-forma cash and public investments (see slide above). 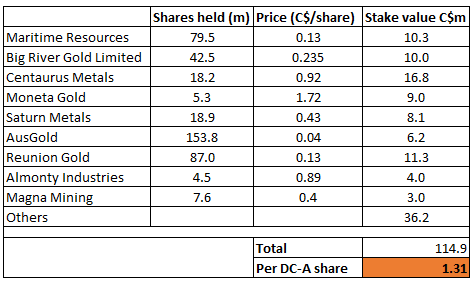 The company has virtually no debt, while preferred stock amounts to around C$78m (C$0.89/share).

Aside from that, Dundee portfolio has private equity investments, real estate joint ventures and various debt/warrants – together these amount to c. C$1.7/share of additional value (excluding already announced asset sales). Most of those are risky, VC-style investments into early-stage companies. However, there are signs that some of the assets might be on the books at conservative valuations. One investment I found particularly interesting is TauRX (Q2 MD&A) – a pharma company that develops a treatment for Alzheimer’s and is currently in phase 3. Dundee values its 4% stake at 2015-2016 VWAP levels (issued from the treasury) – around US$55/share. The carrying value on the Dundee balance sheet is C$69m. However, the market value of this stake could be much higher. In Oct’20 TauRx signed a commercialization partnership agreement with Korean Medicorum Pharmaceuticals after which the partner acquired 25k TauRx shares for US$5m. That amounts to US$200/share price per TauRx share or 4x the carrying per-share value on the DC balance sheet.