The idea was shared by Dan.

US animated content creator Genius Brands to acquire Canadian peer/content producer Wow Unlimited Media. Consideration stands at 0.271 GNUS + C$1.169/share in cash for a total of C$66m. Current spread stands at 19% with plenty of cheap GNUS borrow for hedging. The buyer is flush with cash desperately needs this merger to refresh its growth story and therefore is unlikely to walk away – GNUS has raised a ton of cash last year, promised to do transformational acquisitions, however, has done very little so far. Shareholder approval is likely given merger consideration mostly in cash and acquisition multiple at 11xEBITDA seems fair and in line with peers. Management with 11% ownership is already in favor whereas the support from other major shareholders owning a combined stake of 27% is also likely. Consent from the Canadian foreign investment regulator is required. GNUS wants the combined company to remain eligible for various media production tax credits. There is some risk to that, as Canadians are protective of their cultural assets, however, given several similar precedents over the last few years, I think the approvals will be granted eventually. Shareholder meeting is expected in early Q1 2022 and the merger should close shortly afterwards.

I might be missing something, but the spread likely exists due to GNUS not appearing as a credible buyer at a quick glance and questionable valuation of its shares. Additionally, this is a nano-cap cross-border nature of this transaction as WOW primarily trades on the TSX Venture stock exchange with limited liquidity. The company also has an even less liquid OTC listing. A few more potential reasons for the spread are detailed below.

There are two major caveats worth considering:

Overall, in light of the high probability of successful merger closure and substantial upside/IRR, the risks are tolerable.

The merger has to be approved under the Investment Canada Act (foreign investment watchdog) and is subject to the pre-acquisition restructuring of WOW Canadian operations to ensure that they will continue to satisfy Canadian control regulatory requirements regarding tax credits.

Film and video production tax credits were introduced in 1995. There are two types – CPTC (provincial) and PSTC (federal). CPTC allows subsidizing 25% of the qualified labor expenditure and PSTC for 16%. WOW is eligible for both (but it’s impossible to receive both for a single project). Requirements for application can be found here.

Importantly, there have been several similar mergers completed recently. These precedents suggest that GNUS will manage to structure the deal in a similar way in order to receive regulatory concent.

The company in its current form was built in 2016 (former Rainmaker Entertainment + Hirsch Entertainment + Frederator Networks). Since then, WOW managed to grow its top line considerably, however, the profitability was overhung by a “not great” Youtube business segment. In Dec’19, WOW announced termination with one of its key channel affiliates for which it had administrated Youtube channels – hence the revenue drop and higher profitability in 2020. In 2020 the company has also started restructuring Frederator (studio and YT networks) for which it expects annual C$1.9m EBITDA accretion. H1’21 has been quite strong so far, with Animation Production revenues growing due to IP delivery. WOW has stopped burning cash. Still, the company’s cash position is not strong with C$2.3m  in cash and C$7.7m in debt as of Q2’21. Assuming increased growth, it might encounter problems with funding needs for production expansion as production tax credits are only received after the project is completed. Apparently, raising funds is not easy as well as last year WOW raised pretty expensive C$4.5m convertible debt (C$0.55/share conversion price, WOW share price at the time stood at C$0.45/share) at a 9.5% yield.

Current acquisition offer values WOW at 11.3x LTM adj. EBITDA. In comparison, its peers TBRD.V trades at 11x LTM adj. EBITDA and WILD.TO at 13x adj. EBITDA. I think the offer is fairly valued given that TBRD.V is a better, higher-margin, more profitable performer with a much stronger balance sheet, while WILD.TO is a 10x larger and a rather well-known company, also with higher margins.

Merger PR stated that non-minority shareholders (directors) own 11% of total outstanding shares (common stock + convertible notes). Aside from the directors, other major shareholders include (as of May’21):

Pender equity portfolios continue to provide a steady stream of investment opportunities with 2021 being a record year for take-outs within our equity funds with eleven take-outs completed or announced. Even in the short period since launch, we are already seeing the benefits of the Fund being an organic extension of our equity ecosystem. The successfully closed acquisition of Cloudera, Inc. (CLDR) and recent investments in GreenSky, Inc. (GSKY), AgJunction Inc. (AJX) and WOW Unlimited Media Inc. (WOW) are examples of investments made by the Fund in companies that Pender’s equity funds either hold or recently held a position.

So overall, I expect that major shareholders, with a combined stake of 27%+ of outstanding shares, will support the merger. Given a seemingly fair offer price and decent premium to historical levels (3-year high price) I expect that the remaining required votes won’t be hard to get as well.

The company creates and distributes its IP video content, but outsources the production to China. Pretty much until COVID, GNUS used to be a half-dead stock with business operations resembling a start-up and a serious threat of getting delisted from Nasdaq. The company operated its two digital content platforms – Kid Genius Cartoon Channel and Baby Genius TV. The company had a few IP assets – e.g. two small/old shows, Warren’s Buffet’s Secret Millionaires Club and Thomas Edison’s Secret Lab, and was developing/pushing two new prospective shows Rainbow Rangers (on Nick Jr.) and Llama Llama (Netflix). However, the company generated very little revenue – $5.9m in 2019 and started 2020 with around $4m market cap, $0.3m cash, $2.4m debt, and 11.9m shares outstanding. Then in May’20, the company announced that it is merging its two digital platforms into one network brand – Kartoon Channel and will significantly expand its distribution reach to over 100M television households and 200m users via OTT and mobile devices. Probably because it was still the peak of COVID fears and everyone expected at-home entertainment to do very well, GNUS share price skyrocketed 6x over the next two weeks and was up 30x by Jun’20. The squeeze took a few months and the share price has finally settled at around $1.20/share in Sep’20 still substantially higher compared to pre-pandemic levels.

Right after the Kartoon Channel announcement (in fact, the next day), GNUS began a spree of secondary offerings the company immediately began secondary offerings raising about $100m in 2020 and without any major business improvements ended the year with a $400m market cap (after tenfold increase in share count), $100m cash, no debt and hardly any revenues ($2.5m for the whole 2020). In Q1’21 GNUS raised another $57m from warrant exchange. As of Q2’21, the cash balance stands at $139m.

The company has done very little with the cash pile so far. In 2020 it acquired Stan Lee’s post-Marvel IP (some of his later work and rights to his name) in a joint venture with POW! for $2m. Later, in Nov’20, acquired media advertising firm ChizzCom for $12m. On the operational side, things did not go very well – the Llama Llama show has pretty much failed (season 3 was canceled) and Nick Jr./Shanghai Senuy Media discontinued season 3 of Rainbow Rangers. The company is now creating a season 3 of Rainbow Rangers exclusively for its own Kartoon Channel platform, while Netflix has recently picked up Season 1. Additionally, GNUS has finally launched (after 10 years) the Superhero Kindergarten show (voiced by Arnold Schwarzenegger) and has announced another animated show Shaq’s Garage (voice by Shaq). Aside from licensing, GNUS own Kartoon Channel platform generates revenues only through advertising as the subscription model attempts have failed. During 2021 revenues have picked up somewhat – $3.4m in H1’21, mostly due to the launch of Superhero Kindergarten and the addition of ChizzComm (media advertising), however, based on fundamentals the stock is still incredibly overvalued and is basically alive on its promises alone.

Due to high short interest (currently 18%) the stock has received some attention from Reddit/WSB – there was a short-lived squeeze from $1.60/share to $3/share in Jan’21) – and remains pretty volatile. 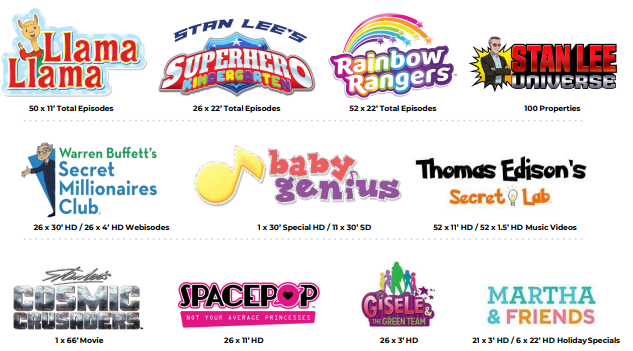 GNUS CEO is extremely promotional, calls Kartoon Channel “the Netflix for kids” and always compares GNUS with other media/streaming giants putting it in their league. However, shares have been going sideways for over a year now (aside from a few temporary spikes) and the CEO has many times promised that the company will use its cash to make transformative acquisitions and grow the business. None of that has been done so far and given lackluster financials, sooner or later the company had to start delivering. Apparently, the acquisition of WOW is the first big step in that direction (source):

This last year, Genius raised a lot of money and we promised our shareholders we would deploy our cash and stock to grow our company and make smart acquisitions. I can think of no smarter acquisition than Wow Entertainment

Basically, the merger will allow GNUS to continue its hype story and will finally add some sizeable revenues. No wonder the PR’s are highlighting that GNUS “grows Pro-forma LTM revenues by over 1100%”, which is kind of funny given the context. On top of that, the merger should be synergistic and will vertically integrate GNUS with in-house content production capabilities from WOW. That’s why it needs those tax credits – to be able to switch from the current Chinese producers. Additional benefits include significantly increased content library, cross-stocking opportunities, as well as several names that WOW has worked on (e.g. Madagascar, Barbie, etc.) that GNUS management will be able to use to continue pumping the stock. Also, GNUS expects to improve WOW brands’ monetization with its recently acquired media advertisement division.

Given the position GNUS is in I think it is very unlikely the buyer will walk away from this merger.