This is a similar merger arbitrage + spin-off situation to Swick Mining Services, that has recently been covered on SSI.

Junior gold miner Amarillo Gold (listed in Canada, but also U.S. ticker AGCBF) entered into a definitive merger agreement to be acquired by its peer Hochschild Mining for around US$100m. The consideration comes at C$0.4/share plus 1 share of a new publicly-traded spin-co with an additional cash injection of C$10m. The spin-co will hold all assets and rights of the Lavras do Sul gold project in Brasil + a 2% smelter royalty on certain other Amarillo exploration properties. Merger conditions include shareholder approvals from both companies in addition to regulatory consents – all are likely to pass. Shareholders’ meetings are due sometime in Feb’22. At current prices the spin-co is valued at close to zero whereas the cash injection portion alone is worth C$0.026/share. Rough estimates based on recent/historical Lavras’ project land purchases suggest that the total land package should be worth somewhere around C$0.046/share. Valuing the spin-co at cash injection + land package value, I estimate the total potential upside at up to 15%.

While the upcoming circular, which will be available mid-end January 2022, will provide more information on shareholder vote and other conditions, so far it seems that the merger is likely to close successfully:

The transaction is expected to close by the end of March 2022.

The biggest risk for this situation is probably the liquidity of the to-be-listed spin-co’s shares. The spin-co will be extremely small (around C$20m market cap) exploration mining asset stock, which might cause difficulties in exiting the position. However, similarly to the recent Swick Mining case, I expect the share price to jump after more details are released on the spin-off (maybe the management will provide some valuation estimates in the circular, etc.) The risk of the buyer walking away is low – Hochschild Mining is a much bigger company with plenty of experience in the Latin American mining business. It is currently looking to expand to Brazil and Amarillo’s Maria Rosa project, which is already beginning the construction phase, looks like a perfect acquisition target.

Worth noting that if the current deal breaks, the downside would be substantial.

The company has two key assets in Brasil:

Posse Gold – flagship construction stage open-pit gold project in central Brasil. It has a land area of 2,552 hectares across three mining concessions plus numerous exploration leases in areas surrounding the mine area. The mine is a brownfield site that was excavated in the 1990s by Western Mining, which sold it to Metallica which proceeded to sell it to Amarillo in 2004. Measured and indicated resources stand at 1200 koz. The project’s expected production average is ~100koz Au over the first 4 years of production. In February’21, the project received a construction license from state regulators and approval for the power line in October. Construction has already commenced, certain infrastructure components are completed and relevant permits are received – targeted the first production in H1 2024.

If acquired, this asset will let Hochschild gain exposure to Brasil. Most of Hochschild’s assets are in LATAM (see graph below). Brazil is considered to be a mining-friendly jurisdiction, in contrast to Peru, where Hochschild operates 2 out of its 3 underground mines (the third operating in southern Argentina). More specifically, recent political developments in Peru increase Hochschild’s operating risk as the left-leaning government is planning on closing 4 mines in the Ayacucho region, two of which (Pallancata and Inmaculada) are owned by the company. Naturaly, the buyer is looking to diversify/expand and Amarillo’s Posse Gold project looks like a perfect target. 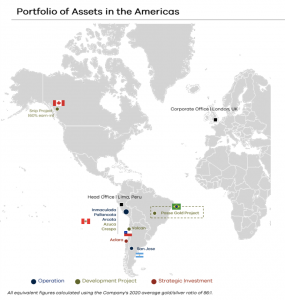 Lavras Do Sul – exploration project in South Brasil. The project covers a total of 22,278ha. The company acquired options to explore the site from Rio Tinto in 2006 and IAMGOLD in 2008 and 2021. Most of the properties have never been explored by modern exploration methods due to fragmented land ownership. So far, Amarillo has spent almost $19m on Lavras project exploration and is currently drilling actively. Additional info can be found on the company’s website.

Historical land acquisition costs could be a decent proxy to assess the value of the property. In June of 2021, the company acquired the remaining exploration concession (20% remaining ownership) of 5,659ha for US$0.7m (4 grey properties marked below). Assuming a similar value for the rest of the adjacent properties, the total land package of 22,278ha might be worth $14m, or C$0.046/share. Previous land deals from 2006/2007 also indicate similar total land package prices. Adding this to spinco’s cash injection of C$10m, I arrive at spinco’s potential value at C$0.072/share. 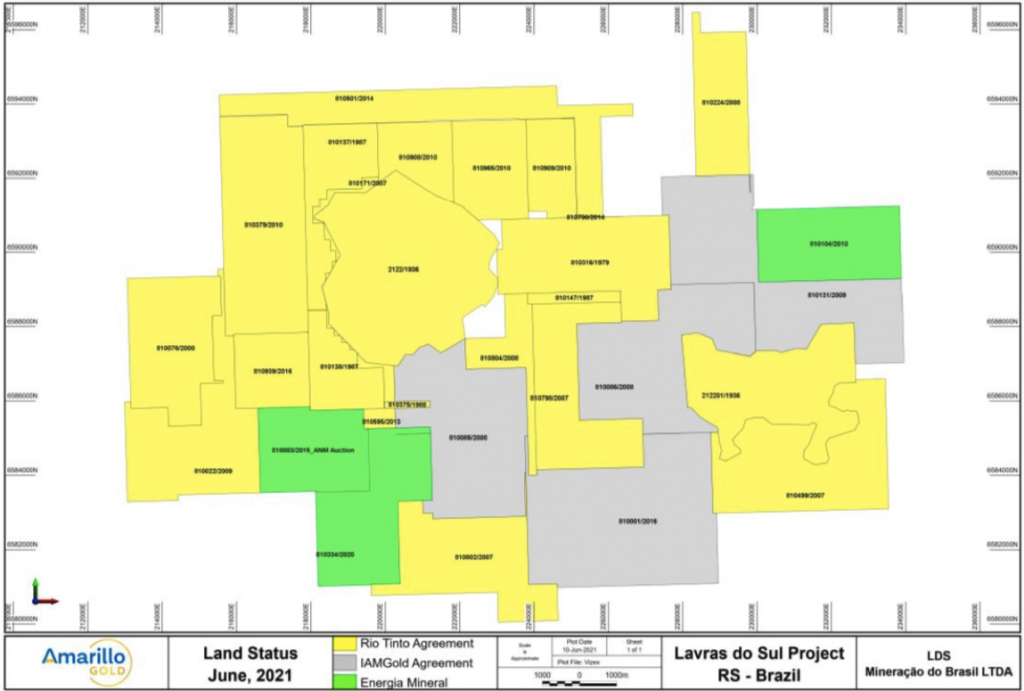