This is idea involves selling OTM put options on SPAC with the exercise price below trust value. The bet will pay off if SPAC transaction does not close over the next month. Selling options is very risky and this is not investment advice. Do your own diligence before investing.

East Stone Acquisition is a SPAC that has already signed a definitive agreement with the target. In the recent vote to extend the business consummation deadline by three months (till the 24th of Feb) 97% of shareholders (except for backstop parties) have chosen to redeem leaving the free-float at barely 5% of the outstanding shares. Market cap is under $100m making it a perfect set-up for short/gamma squeeze that started this Monday (13th of Dec). Yesterday’s shares reached a peak of $26/share and then dropped back considerably. This volatility increased ESSC options liquidity, opening up opportunities for various trades.

One of the possibilities is selling January $10 puts. Trust value stands at $10.26 vs current ESSC price at $14.00. If there is no vote on the transaction by the option expiration date (21st of Jan), ESSC will likely continue to trade at or above trust value and put sellers will pocket the whole premium. However, in the unlikely event that the meeting to vote on the transaction happens till then, losses on this trade are likely to be considerable. 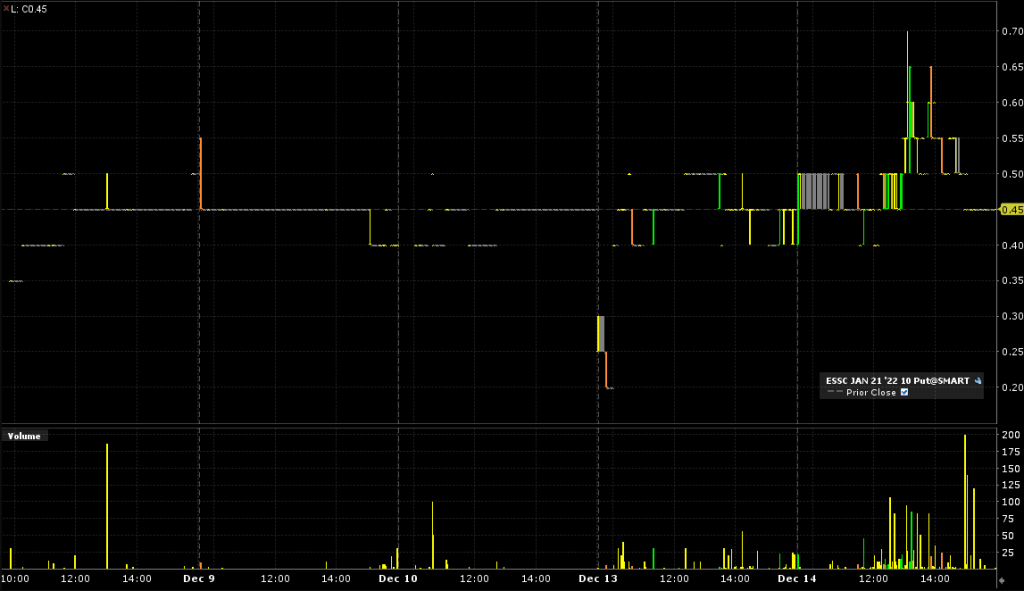 Our previous options trade idea ended well (see here – AMC), however, it was a slightly different bet, albeit also on meme stock. Might turn out less favourably this time.

Before the recent deadline extension vote, ESSC has traded close to its trust value at around $10.2/share. Shares started appreciating in Dec as investors started noticing very low remaining free float (free float should be around 0.4m shares) and then stock’s popularity blew up this week. ESSC started squeezing on Monday (+33% during the day) and continued upwards yesterday (another +41% at the peak yesterday).

With the increased popularity and such minuscule float, it’s quite likely that ESSC will continue to be very volatile for at least a few more weeks and continue to trade substantially above the trust value. 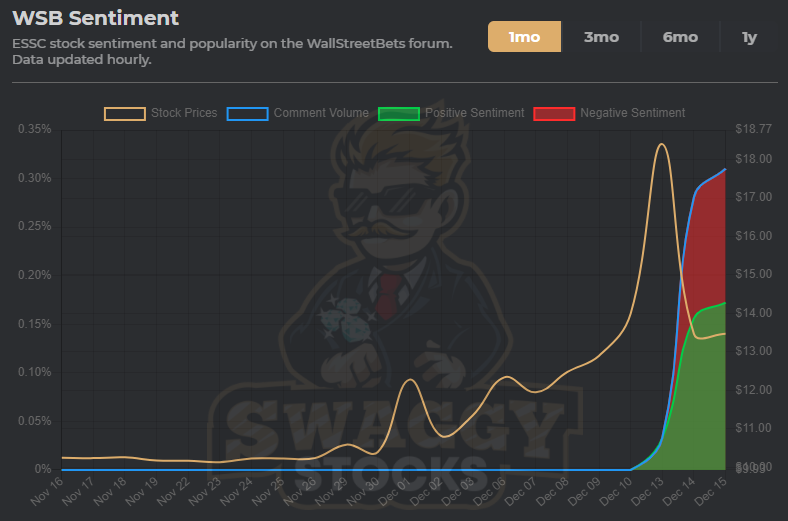 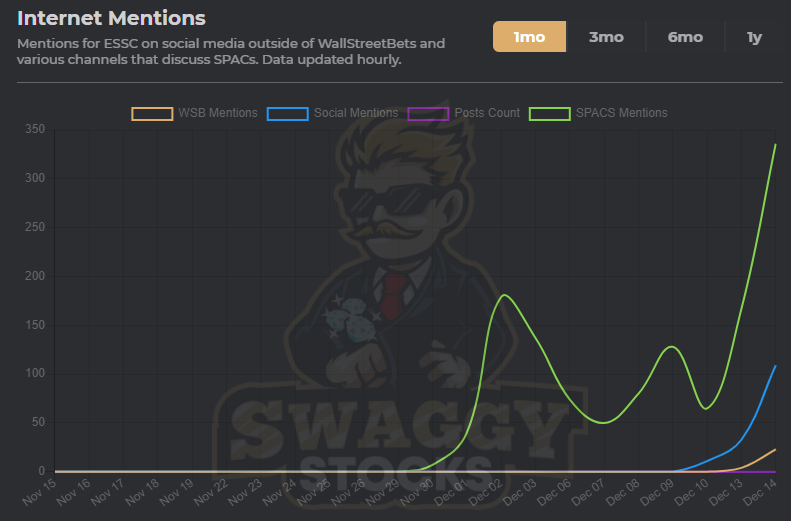 The only real risk to the Jan $10 put option bet is the shareholder meeting taking place before the option expiration, the 21st of January. In this case the downside support by the trust value ($10.26/share) would disappear and ESSC might decline considerably given investor skepticism re the planned transaction. Just the announcement of the meeting date will likely be sufficient to drive up put option premiums.

The meeting date hasn’t been announced yet and with the current holiday season ahead, the chance of management finalizing the deal before the options expire seems to be minimal. Moreover, the last meeting was announced almost a month in advance – the 22nd of October, while the meeting that was supposed to be held on the 18th of November (was later adjourned). According to the bylaws, the minimum notice period is 10 days, making the 11th of January the cut off date for this trade.

The merger process itself has already taken much longer than initially expected (announced in Feb’21). The company has already extended the merger deadline 3 times providing limited explanations for the delays (see background below). If management expected to close the transaction in early January, this would likely had been communicated to minimize shareholder redemptions on the recent extension vote. Instead, the annual report (which came out after the extension) says that closing is expected in Q1 2022:

If everything goes well, the same timing risk can actually turn upside down – once it’s clear that transaction won’t close before the 21st of Jan (that should be known on the 11th of Jan or earlier), the premium on $10 strike put options should evaporate pretty much immediately.

ESSC SPAC was founded in Jan’20 by Chinese businessmen Sherman Lu (independent director of BOC Internation – Bank of China’s subsidiary) and Charlie Hao. The SPAC was intended to focus on fintech business space in North America and Asia-Pacific with an overall transaction value between $300 million and $1.0 billion.

The merger deadline was set for 15 months, but with the option to make two 3-month extensions. Each adjournment had to come with a $0.10/share extension payment from the sponsor.

ESSC quickly found a target – Ufin Holdings (Chinese digital marketing platform) for EV of $300m. The merger was expected to close in early 2021. Then, in Feb’21 (during the SPAC bubble peak), without any additional announcements for 4 months, the company suddenly released a PR stating that now it is merging with JHD Holdings – online and offline merchant enablement service platform with 90k independent retailers in lower-tier/emerging areas of China. Platform services include point-of-sale, supply chain, and logistics, fintech/payment capability, etc. The deal was valued at $1bn (around 12x+ 2020 revenues). More details can be found in this presentation. JDH financials:

Closing was expected in Q3’21. Thus, and the company made two outside date extensions – one in May and another in August – that were allowed without shareholder approval. The extension payments were covered by the JDH loan to the sponsor and increased trust value to $10.26/share.

The conditions included ESSC shareholder approval, regulatory and SEC consents, and ESSC having not less than $110m in its trust value (had $141m initially), counting also some additional funds besides Trust assets. So far, nothing has been mentioned with regards to regulatory approvals so these might still be outstanding as well (the recent annual report has the same copy-pasted text as before).

In October, the company announced a shareholder meeting to amend the bylaws in order to allow for another 3-month to consummate the transaction. Again, limited details were provided for the reasons behind the delays. Clearly, management was expecting huge redemptions as right before the meeting it made a backstopping agreement with certain backstop parties to hold on to 2.9m shares and not redeem these. Backstopping parties agreed to hold the shares for a certain period after the merger closing and will be able to sell them back to the sponsor for $10.41/share (or in the open market above $10.26). For this favor sponsor will transfer additional 400k shares ($4m!!) to backstop parties.

Before the latest vote, ESSC had 17.7m outstanding shares out of which 4.3m belonged to management and 0.1m to bankers. At the meeting, a total of 10.5m shares were redeemed. So the company has around 7.2m shares left with almost all of these in the hands of sponsor and backstop parties.