The holidays have passed in a blink of an eye and we are back online – starting the new year with a full 2021 SSI review. But before we dig into that, huge thanks to all subscribers for supporting our efforts, for sharing profitable investment opportunities, and for actively participating in discussions – without you, our work would not be as exciting as it is today. Thank you all!

Last year was exceptionally interesting for equity markets, filled with many unprecedented events that really lived up to the name of “the biggest casino in the world”. Great volatility always provides great trade opportunities, especially for event-driven investing, and at SSI we have managed to capture some of these quite well.

For SSI 2021 proved to be yet another monster year with 148 new investment ideas published and with the tracking portfolio up 50%+ for the second year in a row. We are really excited about what’s to come and ready to discover new and exciting investment opportunities.

Below we share tracking portfolio performance breakdown and elaborate in more detail on the best and the worst investments as well as some common event-driven themes that seemed to have worked out quite well during 2021.

This chart illustrates a detailed breakdown of returns on individual SSI ideas that were active during 2021 and that were part of SSI tracking portfolio (i.e. quick ones are excluded). While a large part of these event-driven trades generated returns in the range of 10%-40%, keep in mind that the average holding period was just a few months or less, which translates into impressive IRRs. That’s the nature of special situation investing. 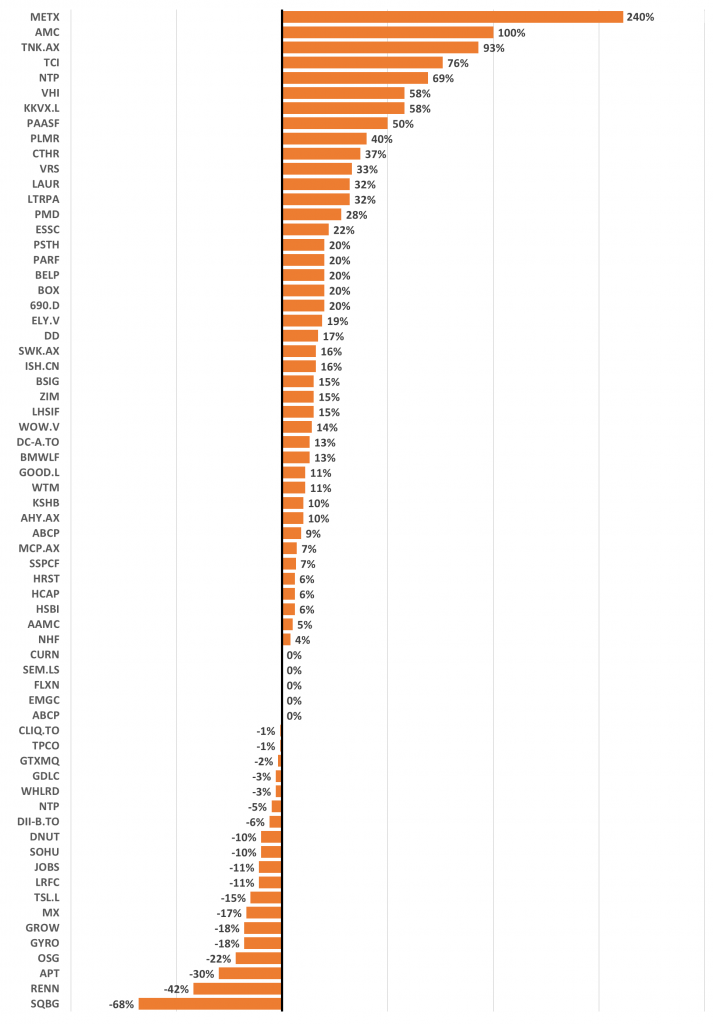 Note: the indicated returns are for the calendar year 2021 and not total returns for each case.

WHAT WORKED: ASSET SALE AND CAPITAL RETURN TO SHAREHOLDERS

Last year we have posted a number of situations where the company was due to sell (or has already sold) a substantial part of the business and was expected to return capital to shareholders in one way or another. It seems that the market always underestimated either the amount of capital that will be returned to shareholders or the valuation of the remaining business.

Although liquidations often take longer and do worse than initially expected, the liquidation cases posted on SSI during 2021 worked out pretty well albeit most of these were rather illiquid nanocaps.

Community Banks. Probably the easiest merger arbitrages so far to bet on have been acquisitions of tiny/smallish community banks. There are always clear merger synergies and acquisitions seem to be done at reasonable multiples of BV. Downside to pre-announcement prices had always been quite limited. A relatively high number of cases have worked out well over the last year.

Precious Metal and Other Miners. Another industry where merger arbitrages have also almost always worked out is mining, especially for companies listed on Canadian stock exchanges. For these names, the spreads of 20%+ have been common, most probably due to lack of investor following and lower market caps (under $200m) rather than actual risks of the transaction falling apart.

Cannabis Companies. This was another industry where mergers with double-digit spreads tended to close successfully. Even after the exuberance in the cannabis space (with respect to elevated stock prices) somewhat faded, consolidation in the industry continued.

MOST VIEWED AND MOST DISCUSSED