Our tracking portfolio has returned 5.4% during January 2022 and is up 586% since 2017. A detailed performance breakdown is provided below.

We have posted 4 new special situation ideas during January. We have also closed 13 cases with only 2 at a loss. The key highlights are:

24 ideas are currently active on SSI.

The graph below details the individual MoM performance of all ideas that were active during the month of January 2022. This chart excludes Quick Ideas. 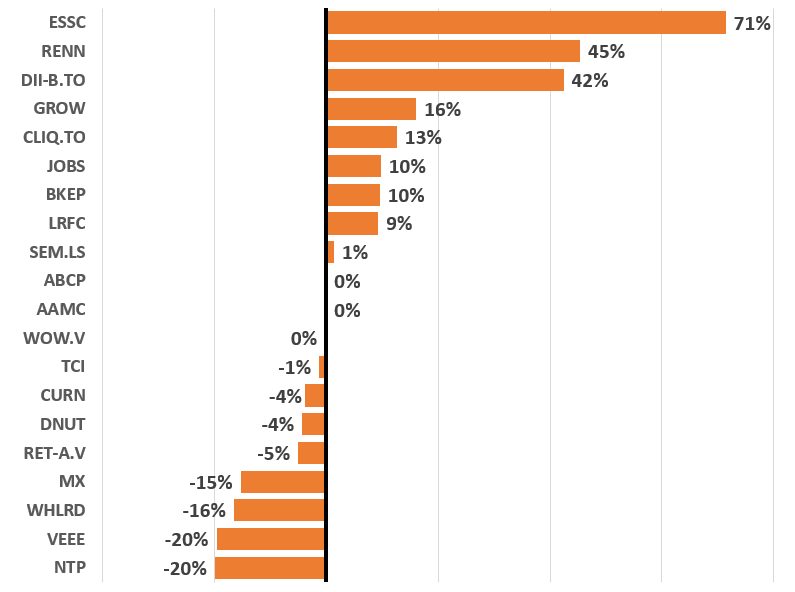 East Stone Acquisition (ESSC) +80% in 3 Weeks
East Stone Acquisition was a SPAC that had already signed a definitive agreement with the target. In the recent vote to extend the business consummation deadline by three months (till the 24th of Feb) 97% of shareholders (except for backstop parties) had chosen to redeem leaving the free-float at barely 5% of the outstanding shares. Market cap was under $100m making it a perfect set-up for short/gamma squeeze, which happened in mid-December. This volatility increased ESSC options liquidity, opening up opportunities for various trades. One of the possibilities was selling January $10 puts. Trust value stood at $10.26/share. The only risk was that the SPAC merger would close before the option expiration, which seemed unlike to due a tight timeline and still unresolved minimum cash condition. These options eventually expired worthless and the idea was closed with a 80% return in 3 weeks. SPAC merger is still pending and a definitive proxy has not been issued yet, a similar play with February options is possible but seems way riskier.

Dorel Industries (DII-B.TO) +34% in 3 Months
Dorel Industries had announced an unexpected sale of its sports division, which comprised a third of the company’s revenue and earnings. The sale came at over 2x of the pre-announcement market cap and cash proceeds were expected to be used to repay debt and return capital to shareholders. Pro-forma for the sale, the remaining segments (furniture and kids accessories businesses) suddenly looked undervalued (trading at 3x EBITDA before corporate overheads), providing a nice buying opportunity. The sale closed early and in Jan’22, the company declared a special C$12/share dividend, equivalent for 55% of the market cap at the time of the write-up. The idea was closed with a 34% return in 3 months (at $28/share) as it was likely that the remainder of the businesses were fairly valued at these levels.

Wow Unlimited Media (WOW.V) +13% in 2 Months
US animated content creator Genius Brands was set to acquire Canadian content producer Wow Unlimited Media. Consideration stood at C$1.169/share + 0.271 GNUS for a total of C$66m. GNUS raised a ton of cash, promised to do transformational acquisitions, however, had done very little thus far. As the buyer was flush with cash and desperately needed this merger to refresh its growth story, the termination of the transaction from the bidder’s side was unlikely. After WOW shareholders approved the merger and the spread narrowed, the idea was closed with a 13% return in 2 months. The remaining 5% spread reflects Canadian regulatory approval risk – nonetheless, 2 previous precedents suggest that the approval should be granted eventually.

Alcanna (CLIQ.TO) +12% in 1.5 Months
Vertically integrated cannabis player Sundial Growers was acquiring liquor and cannabis retailer Alcanna. Consideration stood at 10.69 SNDL shares per CLIQ share with plenty of borrow available for hedging at a 12% rate. The combination offered a strong strategic rationale amidst the increasingly competitive cannabis retail market. Valuation wise it looked like SNDL was getting a bargain and was unlikely to walk away from the merger. The spread widened in December due to the cannabis industry sell-off and adjourned CLIQ shareholder meeting from the 14th of December to the 7th of January. Then the buyer issued a sweetened offer that included a cash portion and the spread narrowed right before the shareholder vote. We closed this idea with a 12% return in 1.5 months.

Krispy Kreme (DNUT) -5% in 1 Month
Krispy Kreme was an international doughnuts brand, which completed the IPO on the 1st of July this year. Post-IPO, the previous PE owner JAB Holdings retained 74% ownership with a standard 180 days lock-up (expired on the 27th of Dec). There was an unusual twist with this offer – right after the IPO JAB distributed about half of its stake to 100 of its minority partners. JAB was unlikely to be a seller after the lock-up (had been acquiring stock in the open market during Nov/Dec), but there was a good chance that a large part of minority partners would quickly head towards the exits – they had invested in JAB PE fund and I was not expecting them to be interested in holding an individual stock in their portfolios. These limited partners owned 63m shares – about 37% of all outstanding or 67% of post-lock up free float excluding JAB. In mid-Jan ’22 the post-unlock sell-off by minority partners has not materialized and the idea was closed with a 5% loss in 1 month (although waiting a couple of days would have resulted in a profit).

Amerigo Resources (ARREF) +33% in 3.5 Months
Amerigo Resources is a processor of copper mining tailings for the largest copper mine in the world – Codelco (Chile). The business is much more stable/safe than a typical mine and operates more like a low CAPEX “copper factory”. ARREF traded just at 3x EBITDA, significantly below most miners and was likely depressed due to limited liquidity, Canadian micro-cap listing with no dividends/buybacks since 2012 and volatile Chilean political situation. However, it seemed that most of the caveats were about to change as due to elevated copper prices the company started generating loads of cash and had just recently started to return capital to investors. Plans for dividend reinstatement were also announced. Political caveats seemed temporary as Amerigo’s main client was state-owned. Eventually, although the capital return program was smaller than expected, ARREF shares rerated up as industry tailwinds continued and political turmoil settled down. We closed the idea with +33% return after 2022 guidance showed unexpected cost increases going forward.

Link Administration (LNK.AX) +21% in 2 Months
Australian superannuation fund administrator Link Administration received a non-binding offer from Carlyle for the second time during 2021. The offer came at A$3/share for the core business (ex. PEXA) + distribution of Link’s 42.8% stake in PEXA to Link’s shareholders for a combined consideration of A$5.20/share. The spread stood at 13% at the time. Link’s board had been pressured by the poor financial performance and failed sale process last year – it seemed likely that the board will welcome the prospective sale to PE firm. Carlyle’s return at a slightly lower offer price suggested firm intentions. Shortly after, another bidder Dye & Durham appeared with a competing bid at A$5.68/share, and management entered into a binding agreement. Outbid by Carlyle’s seemed unlikely and we closed the idea with +21% gain in 2 months.

Yorkey Optical International (2788.HK) +18% in 1 Month
Chinese optical components manufacturing company Yorkey Optical International received an acquisition offer from Asia Optical, its largest shareholder (28%) and major client, at HK$0.88/share, offering 7% spread. Together with affiliates, the buyer controlled 42% of shares. The transaction was subject to Yorkey shareholder approval and could not be opposed by more than 10% of disinterested shareholders – the blocking stake was only 5.8%. A few days after the offer announcement, activist David Webb increased his ownership to 6% allowing him to singlehandedly block the transaction. Mr. Webb argued that the current offer substantially undervalued the company and that he would not support the merger unless the price was increased materially. The offer came just slightly above cash with hardly any value attributed to real estate assets, so it seemed there was plenty of headroom for price increase. Eventually, the deal was sweetened to HK$0.999/share and the spread quickly closed. Later it was announced that Mr. Webb had indeed agreed to this offer and gave his irrevocable undertakings.

Adva Optical Networking (ADV.F) +16% in 2 Months
German-listed optical networking services provider Adva Optical was getting acquired by its US peer Adtran. Consideration stood at 0.8244 ADTN per Adva share. 22% spread with plenty of cheap borrow was available for hedging. The transaction was subject to approval by 70% of ADV shareholders (later lowered to 60%) and the majority of ADTN shareholders. The largest ADV shareholder with 13.7% ownership was already in favor. The buyers’ shareholder approval seemed to be the main risk as, despite the apparent strategic benefits, ADTN share price slumped post-announcement. Consents from the German, US, and Australian foreign investment regulators were also pending. After ADTN shareholder approval, the spread narrowed down to 6% and we closed the idea with +16% gain. The remaining 6% spread seemed too small to justify the pending regulatory and target’s shareholder approval risks.

China Zenix Auto (ZXAIY) +14% In 2.5 months
Steel wheel manufacturer China Zenix Auto signed a definitive agreement to get acquired by its founder/chairman. Each ADS was due to be converted into $1.08 in cash (ex. $0.05 ADS cancellation fee), resulting in 15% spread. Shareholder approval seemed to be a formality as the buyer held c. 70% of shares. ZXAIY seemed very cheap on balance sheet/replacement value, while BV was mostly comprised of real estate assets exceeding the buyout valuation by 4x. So it seemed that the buyer should be motivated to close the acquisition. Regulatory objections were unlikely. Everything played out as expected and the idea was closed shortly after shareholder approval.

Canaccord Genuity Group (CF.TO) +C$80 In 1 Month
Canaccord Genuity Group announced a substantial issuer bid for 6% of its diluted shares at C$15.50 – C$16.50/share. Shares were trading below the lower limit. As expected the tender was oversubscribed, but odd-lot positions were able to pocket risk-free C$80 in 1 month.

Marlin Business Services (MRLN) +5% in 4 Months
A micro-cap bank acquisition, that seemed highly likely to close and 6% spread existed mainly due to half a year-long timeline till expected closing. Shareholder approval had already been received. The remaining conditions included regulatory consents and Marlin Business Bank ceasing operations as a bank. Neither of these was viewed as a major risk to the deal. The consideration was subject to potential downward adjustments if the costs of the de-banking exceed $8m – however, these would still not make any material impact on the consideration, as confirmed by MRLN. As the spread narrowed down to 0.5%, the idea was closed with a 5.5% return in 4 months. While the nominal return was relatively tiny, the risks involved were tiny as well.

Hollysys Automation Technologies (HOLI) – 14% in 6 Months
U.S. listed Chinese company Hollysys was targeted by its ex-CEO, who had increased the bid for the company from $15.47 to $17.10/share. HOLI seemed cheap trading at just 5x TTM EBITDA multiple and with two-thirds of its market cap in cash. Management had been fighting off ex-CEO’s $17.10/share offer for several months and when it started to look like his campaign might succeed, a new bid at $23/share appeared from HOLI ‘s founder. Certain members of the management joined the founder’s consortium, so it began to look like the new bidder will take over the company. Finally, yet another offer at $24/share from a third interested party was announced. Despite three interested bidders, the story did not unfold as we expected. Ex-CEO’s campaign eventually failed and the management was reviewing the remaining two offers. In the process, the company changed its auditor, which seemed suspicious. And then the founder (who was trying to buy the company a $23/share offer) took a seat on the board and became the CEO. A successful privatization scenario seemed less and less likely and then even after a 4th bidder appeared with a $25/share proposal, the board just killed the music announcing that it doesn’t want to consider any offers at all.