Before I begin, just would like to note that this stock is already up 10x from the depressed bankruptcy levels in Jan’21. So the easy money on this situation has already been made. However, I think there is still plenty of juice left and the market is underappreciating or not seeing the earnings power of the restructured Reitmans. That’s the ‘hard part’, however, with bankruptcy fillings already showing strong cash generation and Q4 sales ahead of management’s expectations, it should be a safe bet till the annual results are reported in April. Finally, my experience with reading bankruptcy filings is modest, so there’s a chance that I might’ve missed something important. Always do your own due diligence before investing.

Reitmans Canada is a Canadian brick and mortar apparel retailer, which exited bankruptcy last week. The retailer is controlled by the founding family, the Reitmans, with 23% of economic interest and 57% of the voting power. The company has emerged as a much leaner business after having closed its least profitable stores (a third of the total). Reitmans managed to sail through bankruptcy without diluting shareholders and now has significantly reduced operating expenses, improved gross/operating margins, and net cash on the balance sheet. As is the case with many retailers, the company reported very strong Q2 and Q3 numbers, with last quarter sales in line with pre-covid figures despite a 30% lower store base. The most recent bankruptcy monitor reports indicate an even stronger fiscal Q4 (ending Jan’22). RET currently appears to be trading at 1.8x EBITDA, materially below its Canadian or US peers.

This low multiple does not attribute any value for the owned real estate – a distribution center and an administration office in Quebec – with the cost basis of almost C$1/share, or half of the current market cap. The properties were acquired a long time ago and are likely to be even more valuable today – this VIC article from 2018 estimated the actual market value at C$1.74/share.

I expect Reitmans to re-rate either upon the release of FY22 results on the 21st of April, which will be the first results announced post-bankruptcy. Recent financial performance reported in bankruptcy fillings is as of mid-Dec vs quarterly report on SEDAR as of the end of Oct’21. There’s a chance that the market not fully digesting info in the monitor reports and will be positively surprised by the strong sales at the end of the fiscal year as well as net cash position on the balance sheet. Reinstatement of dividend payments, which were canceled during the COVID outbreak, would be a bonus. So even if normalized longer-term earnings power is uncertain at the moment due to potentially covid-affected sales boost over the last two quarters, holding the position till the release of Q4 results seems to be a safe bet.

Another catalyst is the expected uplisting to the main TSX stock exchange. RET has been moved to Venture exchange only due to the restructuring. Now that the page has been turned, management will likely bring the company back to the main stage.

There could be several reasons for this situation to exist – this is a fresh post-bankruptcy stock, that trades on TSX Venture stock exchange and that has historically been shrugged away by investors as a “melting ice cube” with Reitmans not caring for minority shareholders. Now the company is back in growth mode (although not clear for how long) and management has done plenty of shareholder-friendly actions, including the neatly executed restructuring without any dilution. During 2016-2019 the company returned $92m of capital to shareholders through dividends and buybacks, including tender for 30% of non-voting Class A shares at C$3 in June’19 (apparently, a large shareholder approached management wishing to exit in order to rebalance the portfolio).

Reitmans has two share classes – common shares (voting, ticker: RET.V) and Class A (non-voting, ticker: RET-A.V, larger float, more liquid). With Reitmans family having voting control, the voting benefit is kind of worthless, and, historically, the spread between the two classes of shares fluctuated within the +-10% range. This changed during the bankruptcy when the spread exploded. I think it makes sense to hold the position in the cheaper and more liquid Class A shares.

Key risk – company’s margins achieved over the last 3 quarters prove to be very temporary and Reitmans retail operations do not generate any cash beyond current Q4. Even in this pessimistic case, the company is currently trading just a bit above the value of the owned real estate, even if management might never sell it.

Reitmans owns retail apparel brands and stores in Canada. Before COVID it owned 6 brands and nearly 800 stores. All Hyba brand stores were closed in 2018 and two others brands (Thyme and Addition Elle) were exited in 2020 during the bankruptcy. Currently, the company operates 3 brands and 412 stores:

The company owns one distribution center in Quebec + administration office in the same city (as referred to above).

The financial performance table is provided below. Reitman’s fiscal year ends in January.

Note – Due to the shift to IFRS 16 accounting standards in 2019, RET has started capitalizing leases and recording lease payments through depreciation and amortization. This inflates the headline adj. EBITDA numbers and, therefore, has to be normalized accordingly. Also I have adjusted for one-off subsidies received from the government covid support programs. All references to adj. EBITDA made in this write-up are to the adj. EBITDA normalized for leases and one-off subsidies.

Sales decline over the last couple of years was mostly driven by the reduction in the store count, pre-covid underperformance of certain brands as well as covid related store closures. All company’s stores were closed from mid-March to July of 2020 and then the majority were closed again from the end of 2020 till late spring of 2021. Only the last two reported quarters were almost fully operational and Reitmans delivered quite an impressive financial performance and profitability. Not only was there a rebound in gross margins to pre-covid levels, but SG&A as a percentage of sales improved from 55% to 45% and has driven most of the profitability gains vs pre-covid periods. This is likely the result of improved store base efficiency after one-third of the stores (the least profitable ones) were closed during the restructuring. Remains to be seen if these margins can be sustained going forward.

Management has recently been reporting growth in e-commerce sales, unfortunately, no figures have been disclosed aside from the C$15.3m increase in freight costs due to the growth of e-commerce. Monitor reports have also continuously mentioned that the improved performance over the recent quarters is attributable to increasing e-commerce sales.

When it comes to the financial performance during the current quarter (ending Jan’22), certain insights can be inferred from the most recent bankruptcy filings.

The latest 10th monitor report includes sales from the 12th of September to the 18th of December. Comparing it to the 8th monitor report that has figures for the 12th September – 6th November period, we see that during the first half of fiscal Q4 (from 6th of November to 18th of December), RET generated C$130m revenues, which is already 75% of the result achieved during fiscal Q3. A large part of that was probably due to the Christmas season boost, but it’s basically guaranteed that fiscal Q4 revenues are going to be stronger than Q3.

Also Reitmans appears to have generated C$39m cash in the first half of Q4.

Additionally, these results also appear to be ahead of management’s expectations, as shown in the monitor report. 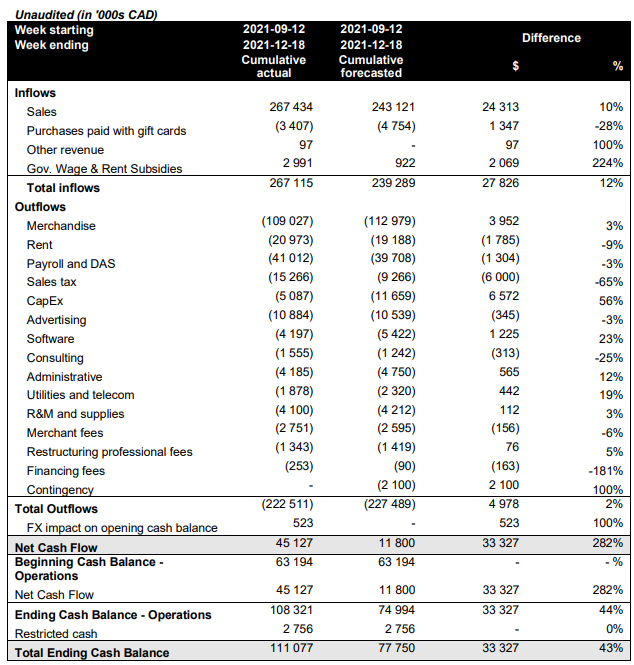 Although I do not put much weight to it, Google Trends results seem to support the notion of record-breaking sales for fiscal Q4 – charts for all the brands show search interest way above pre-covid levels (the chart below is the word ‘Reitmans’ in Canada, calendar quarters indicated).

RET entered bankruptcy protection after the pandemic outburst in May’20. It’s important to note that bankruptcy wasn’t a result of credit debt, in fact, since FY19 the company had no debt at all (except for pension liability). The bankruptcy was entered based on various working capital/trade liabilities claims (see graph below):

During the restructuring process, the company received around 1700 claims totaling C$186m. Under the reorganization plan, all claims below $20k were fully covered and all larger claims were repaid at 45%-100%. The total claim repayment sum was C$95m. The plan was subject to majority consent from the larger claimants, which they granted in Dec’21. Court approval was received on the 4th of Jan and 8 days later the company emerged from bankruptcy. Claims were paid via a recently signed credit facility with Bank of Montreal (3 years term, rate not disclosed yet) of C$115m. This implies that the $111m of cash indicated in the monitor report above is probably still on the balance sheet and could potentially be used for share repurchases. Q3 also saw QoQ increase in inventory of C$24m so some of that might get released during Q4 quarter or at least that makes further material investments in working capital less likely.

There are several positive things worth highlighting about the RET’s bankruptcy process:

The most recent capital structure overview/valuation table is provided below. For Q4 EBITDA below I have used the same figure as the adjusted Q3 (corrected for lease payments and subsidies). As outlined above, I think Q4 will turnout materially above Q3 results.

Reitman’s currently trades at 1.8x E2021 EBITDA. This is way below Canadian and US peers. Most of these peers are far bigger and recently have also been showing higher operating margins, however, gross margins are pretty comparable. Although Reitmans might deserve some discount due its to smaller scale, 1.8x multiple seems too punitive.

The company now trades even below historical valuations levels (2x-3.5x adj. EBITDA), when the business was struggling due to underperforming Hyba/Addition Elle brands and had a much weaker digital presence. The quality of the current business is much higher with a strong balance sheet and improved operating leverage after the recent restructuring. If the company can maintain SG&A expenses relative to revenues at the current 45% levels (vs 55% historically), the business will continue to print $50m in annual EBITDA. If these margins are sustainable at least for a few more quarters, remain to be seen.

Another thing is that at the moment, all retailers look rather inexpensive on E2021/trailing numbers as the last two/three quarters were explosive. The market seems to be expecting that most of the recent growth will fade away soon. However, as detailed in this nice YAVB post, COVID has likely brought some positive long-term changes to the sector as well, e.g. faster shift to the online, reduced number of brick and mortar competitors, etc. There is a decent chance that the market may be overly pessimistic with the expectation that sales/margin boost is going to be short-lived, especially now that it’s pretty much evident that Q4 will be very strong – RET’s monitor reports, DXLG holiday sales update, ATZ.TO Q4 outlook.

The main question is what could RET’s long-term normalized earnings look like. That’s a bit of guesswork, but as noted above, I think it’s reasonable to estimate normalized adj. EBITDA at C$40m-C$50m. At 4x EBITDA multiple, this would translate to $3.60-C$4.40/share price targets (64%-100% upside).

I’ve only seen two write-ups covering RET’s bankruptcy/post-bankruptcy situation so far and both used headline adj. EBITDA as reported by the company, without normalizing for the IFRS lease payments or subsidies. It’s obviously not correct, but it may also have some hype potential as at current prices RET trades way below 1x reported adj. EBITDA of C$105m (again conservatively assuming Q4 will be in line with Q3). So once the annual results are out, Reitmans will be screening extremely cheap and I expect the market to react.