Activist hedge fund Driver Management acquired 6.5% of Pennsylvania/Maryland bank Codorus Valley Bancorp and is now pushing for a sale of the bank. Driver Management is a relatively fresh fund (started filing early 2019), but already has a somewhat decent track record in targeting only Pennsylvania and Maryland banks. Activist uses the same playbook across its campaigns – agitating the sale and starting intense proxy wars with the management. Driver Management says CVLY could be worth 1.5x TBV in a sale and says that there are many potential acquirers that are interested in the bank. From the Jan 18th letter:

I believe that there are a number of publicly traded banking organizations that are very interested in acquiring CVLY at a significant premium to the current (and even the highest) trading price for CVLY’s common stock.

At the same time, (i.e., while the stock is trading around $22 per share, representing only the slightest premium to tangible book value), I believe there are a number of interested parties who might offer shareholders consideration worth in excess of $31 per share (implying a valuation of approximately 1.5x tangible book value) in a sale.

While the activist might be painting a bit too rosy picture, the banking industry consolidation mode has intensified in 2021 – a number of CVLY Pennsylvania/Maryland peers were acquired (or are due to be) last/this year. All of the transactions were announced at a price of 1.3x TBV or higher. Assuming the same multiple for CVLY would result in 18%+ upside.

Driver Management urges the board to engage with investment bankers to solicit acquisition proposals and intends to nominate 3 directors (one is ex. COO) to the board (8 seats in total) in the upcoming shareholder meeting in May. The activist is also demanding the board to give it access to certain books and records of the company to perform due diligence on certain suspicions about the bank’s governance issues (also standard playbook for Driver Management).

The board is trying to fend off the activist, however, there are some positive factors here, which indicate that the board might finally yield and start a sale process:

In addition, I believe that it is Mr. Miller’s practice to avoid any activities that might spur investor interest in CVLY, such as trying to secure equity research coverage or attending investor conferences. It is also my belief that Mr. Miller has chilled potential acquisition overtures by other banking organizations.

I recently heard a rumor that Larry Miller, the former chief executive officer of Codorus Valley Bancorp, Inc. (“CVLY”) and chairman of CVLY’s board of directors (the “Board”), was in the process of exploring a potential sale of CVLY during the past fall but abandoned those plans because he believed that you “deserved a chance” to run CVLY. This was a rumor, so I have no idea whether it is true or, if so, I have accurately described the situation, but based on what I know about Mr. Miller, the Board and CVLY, it sounds plausible enough

Given that Mr. Miller is out and the board is facing significant pressure now, there’s a decent chance that the bank might get sold – same way like Driver Management’s first activist campaign ended in 2019 (DnB Financial, see more details below).

Aside from the obvious risk that the activist pressure might fail to deliver any results, an additional risk is Driver Management settling with the company for some kind of cash compensation. A similar case has already happened back in 2019-2020 when Driver Management settled with FUNC, extracting benefit for itself but not for the other shareholders. However, Driver is a fresh activist and going into a similar settlement for the second time in a row would definitely hurt its credibility.

Given the ongoing buybacks and low valuation, the downside seems protected at least till the shareholder meeting. Even if the activist campaign eventually fails, I believe that pretty much for the same reasons, the downside should still be rather limited.

On a side note, recent purchases by one independent director John Giambalvo might be fairly interesting. Since the start of the activist campaign (Sep’21) started he acquired $260k+ of shares at the current price level. However, none of the other directors are buying shares at the moment (management owns 4.5%+).

CVLY has 31 branches in Pennsylvania and 5 in Maryland. Although Maryland is a small part of locations, it comprises 40% of CVLY loans. Total assets are $2.4bn.

RE and builder loans are collateralized by real estate. Credit risk is sort of higher than for the average community bank here due to large exposure to commercial loans (hotels, retailers, etc.). This has played out negatively to CVLY during the pandemic and in 2020 the company had to make a $15m loan loss provision (vs historical $3m-$4m provisions annually). However, half of that ($7.5m) was due to borrower fraud (the activist says it’s most likely Welkowitz real estate fraud). In 2021 the performance rebounded but still has to recover to pre-COVID levels – which is likely to happen after the pandemic effects in the industries the bank lends are fully over.

In its letters, the activist is claiming that CVLY might be worth 1.5x TBV in a sale, however as the basis for this estimate the activist is using much larger banking peers (all in the table below have market caps of around $2bn). 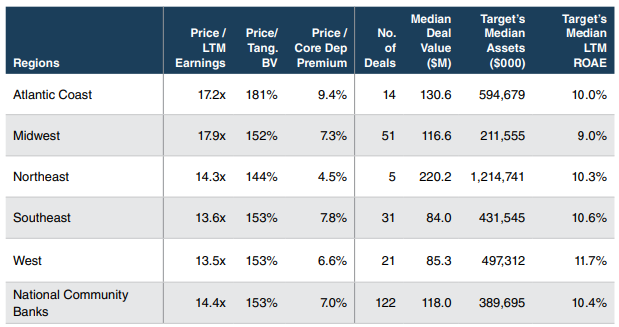 In the table below I have selected a number of bank transactions in Pennsylvania/Maryland that are of more similar size to CLVY. Assuming the eventual performance normalization, potential synergies, and improved risk management, I don’t see why CVLY wouldn’t be able to fetch a 1.3x TBV multiple in case of a sale.

A couple of highlights:

Driver Management invests exclusively in the US banking sector with the aim to ” identify undervalued banks and seek to unlock value through active engagement with senior leadership and boards of directors”.

So far it has made 4 activist campaigns, two of them are still ongoing: