North American exterior building products manufacturer Cornerstone Building Brands received a non-binding proposal from its major shareholder (owns 49%) PE firm CD&R at $24.65/share. The merger is conditioned on approval by a special committee and also consent from the majority of minority CNR shareholders. More information and the decision of a special committee are likely to be announced tomorrow (1st of March) together with the earnings report. Special committee approval is likely and the offer comes at a 43%+ premium to the unaffected price (there was a leak on Bloomberg 4 days before the announcement). The spread is expected to close once a firm agreement is in place. There is also a decent possibility that the offer will be increased upon signing the definitive agreement. The offer comes at 7.7x E2021 adj. EBITDA normalized for acquisitions and divestitures and 10.1x 2019 adj. EBITDA, which seems a bit weak compared to historical multiples and in line with peers (i.e. no control premium). CD&R is likely trying to opportunistically capitalize on several overhangs that have so far kept CNR prices depressed.

Aside from a steep downside and some shareholder approval risk, the spread also exists because of the non-binding nature of the proposal as well as the fact that CD&R has called its offer “best and final“. However, I believe that this is just a negotiation tactic – the buyer also said that the final deal is subject to negotiations and they reserve the right to modify the proposal at any time. Due to the offer (and potentially pending negotiations) Q4 earnings release was delayed by one week and the conference call was canceled. CD&R also hinted that they are not willing to sell, which reduces the chance of a competing bid.

CD&R is a large PE group that knows CNR business inside and out, hence, why they said only minimal due diligence will be required. The bid at $24.65/share clearly signals they think the company is worth much more.

CD&R has been an investor in NCI Building Systems (commercial – metal systems, roofing, panels) since 2009. In 2018 it acquired Ply Gem (residential – windows, doors, and sidings) and merged the two companies. The merger closed in Nov’18. The company changed its name to Cornerstone Building Brands in April’19. CD&R holds a 49% stake in the combined company since then. The merger combined two different businesses with very limited synergies, minor cross-selling opportunities and came just at the time of US housing market turbulence starting in mid’18. The market hated it, which resulted in a steep sell-off right after the merger was closed. This same overhang of having two different businesses and effective control by the PE firm has kept CNR share price low/behind most peers even amidst the housing market explosion in covid years.

Since the merger was closed, CD&R has managed to implement cost-cutting measures and improve the balance sheet of the combined company. The business mix has changed over time as with more sales now leaning on the legacy Ply Gem side (residential), which has been riding housing boom tailwinds since H2 2020. Management mentioned, that the commercial business (legacy NCI) has historically lagged housing cycles by 1.5-2 years, which has finally started kicking in during the last couple quarters as well.

The offer came just 1 week before the Q4 earnings and earnings releases got delayed subsequently. CNR peers (BECN, DOOR, JELD) have all reported relatively strong Q4 results and outlook for 2022.

Given all of the above, it seems that CD&R’s offer is quite opportunistic here.

Special Committee is likely to approve the offer. The talks had begun and the committee had already been set up even before this offer and apparently the price had already been increased in discussions. In its letter, CD&R states that this public offer price “has significantly increased in value since the outset of our exploratory discussions with the Special Committee and its advisors regarding a potential transaction”. The fact that 4 days after receiving the latest offer, the board has suddenly decided to postpone the earnings release and cancel the conference call is quite intriguing and potentially suggests that negotiations are ongoing.

The key question here is whether CD&R will raise the offer to persuade shareholders to sell and show that the Special Committee has done its job.

Ply Gem business (residential, windows, and sidings) is in much better shape now due to cost-cutting efforts and the booming housing market.

CNR doesn’t have any direct peers, however, the ones that are somewhat comparable (but with lower EBITDA margins) trade at similar multiples.

CNR is one of the largest manufacturers of exterior building products in North America. It operates 67 manufacturing facilities in US and Canada, supported by 40 distribution facilities (works with plenty of other dealers/distributors as well).

On the supply side the company is mostly exposed to steel (commercial) and PVC, resin, glass, and aluminum commodity prices although price volatility is mostly transferred quickly to customers due to quick inventory turnover.

This presentation shows how the business looked at the time NCI/Ply Gem merger. NCI/commercial business exposure is now a bit lower due to faster growth of Ply/residential since the merger – commercial generates 32% of sales vs 38% after the merger.

Estimated cost cuts and synergies at the time of the merger: 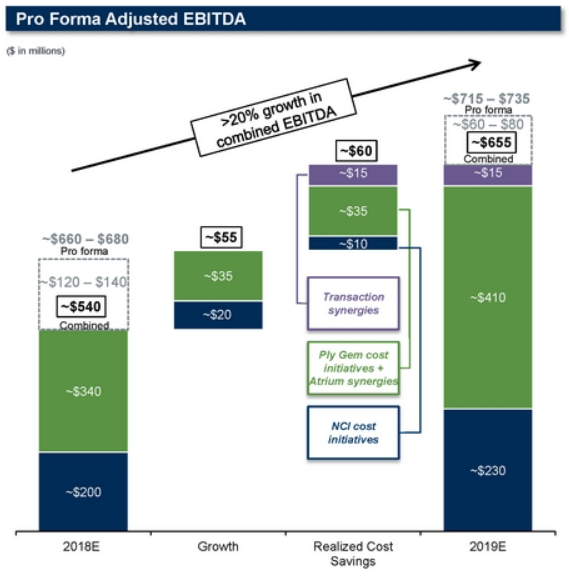 Historical financial information is shown in the table below – CNR has done several acquisitions and divestitures recently, so the numbers below are Pro-forma (reported in CNR press releases).

Due to strong financial performance, CNR has reduced its leverage (net debt/adj. EBITDA) from 5.2x to the most recent 3.4x. Management intends to lower it by 0.75x-1x turns more in 2022.

In the latest guidance, the company was estimating Q4’21 adj. EBTIDA to be at $170-$185m, which should result in $680m adj. EBITDA in 2021. In Aug’21 CNR divested part of its commercial business ($1.2bn proceeds), which from the Q3 Pro-forma segment result adjustments in the press release, apparently, was generating small adj. EBITDA losses. Moreover, recently CNR made an acquisition of UCC (metal roofing to residential). UCC generated $255m TTM sales and in the conf. call management said it expects mid-teens adj. EBITDA margins before synergies (30%-50% EBITDA estimated). Putting these together suggests that CNR adj. EBITDA generation should stand at around $710m per year going forward.

The commercial segment has been seeing traction over the last couple of quarters as it finally caugt up with the booming housing market (higher volumes, increasing backlog). During the last Q3 conf. call management expected strong continuing performance of the commercial segment, but also said that on a normalized basis commercial adj. EBITDA margins should be in the mid-teens. Worth noting that on the supply side commercial business is exposed to steel prices, which apparently were going down throughout the whole Q4.

Residential (windows and sidings) has been performing strongly during 9M 2021. Windows adj. EBITDA margin dropped to 8.6% in Q3 due to certain labor shortages and freight issues, but management said that in Q4 it should get back to 11-12% again.

So far the US housing market is still booming (SF housing starts) while the supply of the existing homes is at record lows. Homeowner improvement and repair spending is growing as well and is expected to accelerate in 2022. Worth noting, however, that mortgage rates (30-years) went up by 1% since the start of the year to around 4% amidst fear of FED rate hikes in 2022.