Our tracking portfolio has returned -0.8% during February 2022 and is up 580% since 2017. A detailed performance breakdown is provided below.

We have posted 9 new special situation ideas during February. We have also closed 2 cases.

30 ideas are currently active on SSI.

The chart below depicts returns of SSI Tracking Portfolio since the start of 2017 – these are not actual trading results but rather an aggregate performance of investment ideas published on SSI:

The graph below details the individual MoM performance of all ideas that were active during the month of February 2022. This chart excludes Quick Ideas. 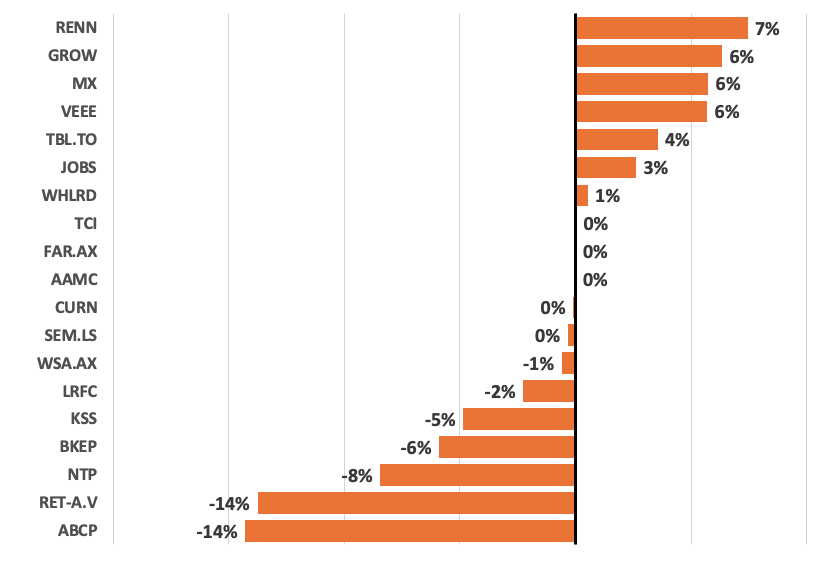 Minds + Machines (MMX.L) – Upside TBD
Minds + Machines used to be a top-level domain registry that completed the sale of the majority of its assets to a much larger peer GoDaddy in Aug’21 and began winding up the company. Most of the cash was quickly returned except for the escrow amount, which is due to be unlocked at the end of March’21. Spread to liquidation value was above 20%. The main caveat was that company was about to delist its shares on the 22nd of February’21, so the idea involved a risk of holding delisted shares until the remaining cash is returned. However, the smooth liquidation process since the asset sale, presence of large institutional investors who likely orchestrated the wind-up, clear management communication of intending to return the maximum amount of cash quickly, and a wide margin of safety to cash on hand held by MMX gave confidence in smooth finalization of the wind-up. Shares were delisted as planned and shareholders are now waiting for the escrow cash to be released.

IGE+XAO (IGE.PA) -11% in 6 Months
Schneider Electric, French mega-cap energy management, and automation company launched a tender offer for all IGE+XAO shares at €260/share. Schneider Electric owned 68% of common shares, 79% of voting rights and intended to reach control of 90% of common shares in order to squeeze out the remaining shareholders. However, two large minority shareholders of IGE, Gay-Lussac Gestion and Orfim, with combined ownership of 10.5%, were unsatisfied with the price and refused to tender. This effectively blocked Schneider Electric from reaching the squeeze-out threshold and increased the chances that the price might get adjusted upwards to persuade minority shareholders to tender. The tender ended with Schneider collecting 84% of IGE+XAO’s shares. It still seemed that Schneider might make another bid for the remaining shares. Several months later, it announced stock for stock offer at €241/share. However, it seemed that Schneider has secured shareholder support, so the idea was closed with an 11% loss.