A merger case that has potential to turn into a bidding war. The idea is quite speculative and my knowledge in nickel mining is limited so read the below with a lot of salt. Having said that, the downside appears to be well protected and the situation itself is really intriguing.

Major Australian nickel miner Western Areas signed a scheme of arrangement to be acquired by larger mining peer IGO at A$3.36/share in cash. Shareholder meeting is expected in April with closing shortly afterwards. Approval from 75% of votes cast and participation by 50% outstanding shareholders is required. The largest shareholder Perpetual with 14.7% WSA stake agreed to support the transaction if there is no superior proposal. WSA shares have been trading slightly above the offer since the merger announcement indicating expectations of a higher offer. And there are two parties that are likely to be interested.

Prominent metals/mining investor and the 2nd richest Australian Andrew Forrest started accumulating WSA shares just around the merger announcement and subsequently increased his stake from 5% to 9%. The last purchase was made on the 25th of Jan (2.9% WSA shares) at an average price of A$3.43/share, i.e. above the offer price. Media is speculating that Andrew Forrest is preparing a competing bid and wants to break BHP’s nickel dominance in Western Australia. Andrew Forrest is known as an aggressive acquirer and recently won one of the most intense bidding wars of last year with BHP for another nicker miner Noront Resources – the price was bid up 5x above the pre-announcement levels. His purchases of WSA shares, especially above the A$3.36 offer price, strongly suggest that something is in the works. Andrew Forrest is not a “merger arbitrage” investor and he’s probably not throwing money on the table just to speculate on a small price bump.

Another bid might come from BHP itself – there would be numerous strategic benefits in such a merger. The key WSA asset is located just in between of BHP fields. The acquisition would allow BHP to secure a long-term supply for its nickel sulfate plant and crush potential competition from the new sulfate plan that might get built if IGO/WSA were to merge.

IGO is known as a conservative buyer, however, I wouldn’t expect it to give up on WSA so easily given its aging Nova nickel mine, previous plans for nickel sulfate plant, and 71% portfolio concentration on Lithium (Nickel at a lower 22% level in terms of reserves). The merger would shift the reserve base towards 52% Lithium and 43% Nickel. Having said that, IGO management hinted strongly that the offer will not be increased as IGO is “the only bidder who has done the due diligence, understands value and has a bid on the table”. Not clear if IGO would be more flexible after the appearance of another bidder.

If the bidding war thesis fails and WSA gets acquired by IGO, the downside is capped to 2.8%. Meanwhile, downside to pre-announcement price is only 6%, however, the nickel sector has moved up substantially since then due to soaring nickel prices with WSA peers up +9%-16% since the offer announcement.

The obvious risk here is exposure to nickel price volatility, however, the recent price run-up has been caused by substantial nickel inventory shortages worldwide and I’m willing to bet that it won’t get fixed fast enough, at least not until this whole bidding war plays out (April’21).

In terms of final production, 70%+ of nickel is used for stainless steel and only 7-8% for EV batteries (precursor cathode manufacturing). 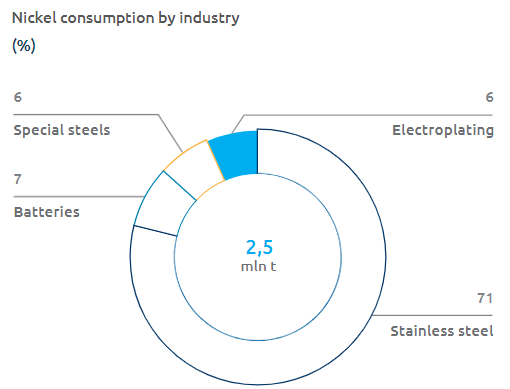 Although EV is just a tiny portion of total demand right now, it is the fastest-growing segment, expected to reach 35% of total demand by 2030. This is due to both the number of EVs increasing and also the increasing amount of nickel used in the EV batteries (nickel has a very high energy density, which makes batteries more powerful).

There are two classes of nickel in terms of quality/purity –  higher class 1 and lower class 2. Only class 1 can be used in manufacturing nickel sulfate crystals that are used in the EV cathodes, whereas class 2 (ferronickel, nickel-iron pig, etc.) is used for stainless steel and other applications. The important thing is that the supply of class 1 nickel is much more limited than the lower quality counterpart. Class 1 has usually been extracted only from nickel sulfide ores, whereas class 2 – is from laterite ores. In the last decade, the discovery of nickel sulfide ores has been very limited and there’s a similar shortage of new projects is planned for the medium term as well. Pretty much all analysts are forecasting the class 1 nickel industry to go into a significant deficit by the end of a decade (e.g. this external study by Roskill for the European Commission):

That is why last year Elon Musk said that potential nickel shortage is “the biggest concern” for the EV sector.

However, mining nickel sulfide ores is not the only way to produce class 1 nickel. In recent years numerous high-pressure acid leach (HPAL) projects have been started, which intend to turn nickel mined from laterite ores into the intermediary product (matte), which then can be processed into nickel sulfate crystals suitable for EV batteries. Most of these projects are in Indonesia and funded by China. By far, it is not yet clear whether HPAL is the answer to class 1 nickel shortage problems because of very high CAPEX requirement (e.g. one of the first HPAL projects Goro by Vale in Indonesia saw its Capex rise from $1.5bn to $4.5bn), high complexity/technical issues and environmental issues (3-4x more greenhouse gas produced vs. nickel sulfide processing + significant issues with acidic tailings waste).  Hence, many such HPAL projects have failed so far. Given the ESG rise, there’s substantial skepticism in the market whether Western OEM manufacturers will agree to accept such nickel as it would make EVs no longer as green defeating the whole purpose of the technology. Moreover, most of the projects are funded by China, which Western OEMs are also trying to move away from. Yet, the projects are still being started (e.g. Huayou’s $60 kt/year project in Indonesia) gambling on the possibility that OEMs will have no other choice as nickel sulfide stockpiles get depleted with time. Worth noting that due to high CAPEX/operational costs it is estimated that Indonesian HPAL projects need nickel prices at least at US$22,000/mt to be profitable, rather in line with the current prices.

Nickel prices have been soaring recently due to concerns over depleting nickel inventories worldwide. LME (London Metals Exchange) inventories have dropped to 88kt from 260kt in April’21. Whereas, in Shanghai Exchange warehouse inventories are near the record lows at 4.7kt. 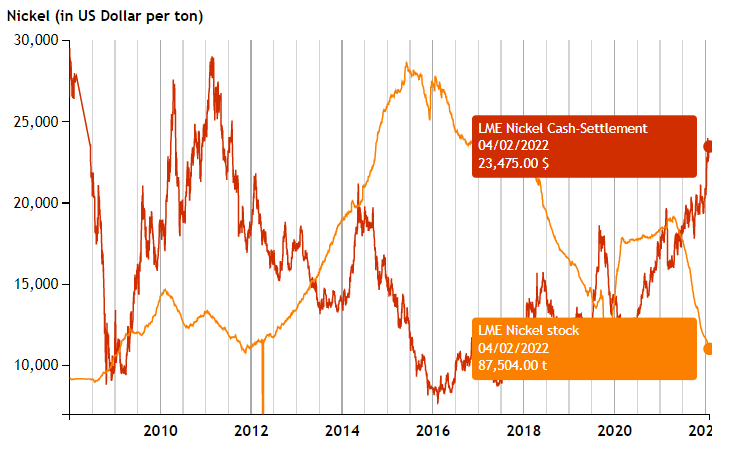 Most of (at least LME) inventories are kept in form of Nickel briquette (class 1 nickel), which can be easily be used as a feedstock to produce nickel sulfate. It is reported that most LME orders are shipped to China, so it’s likely that due to extreme EV rise in China (+154% YoY sales last year), battery producers are trying to secure their supply and are squeezing nickel prices.

Australia is an important player in class 1 nickel mining industry.

The legacy mines are getting depleted and the main focus of the company right now is its Cosmos hub with Odysseus mine.

BHP as a potential bidder

The interesting thing is that Cosmos hub is located right in the middle of BHP’s asset belt. Norilsk’s assets depicted in the map were acquired by BHP in 2020: 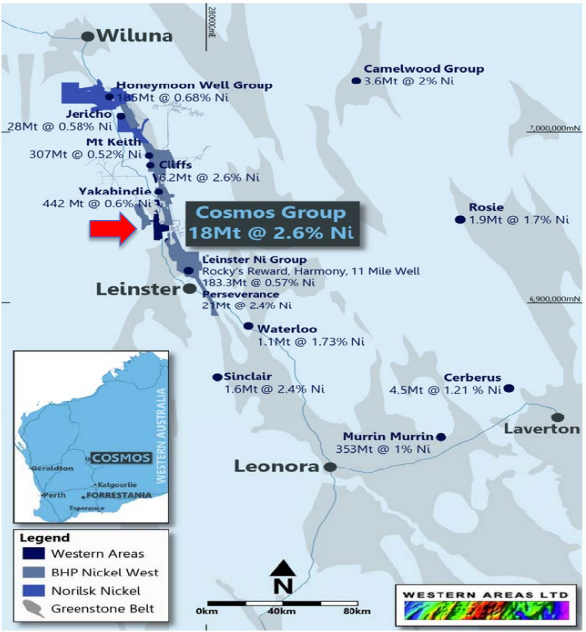 BHP is one of WSA’s largest clients. The companies signed an offtake contract under which WSA sources at least 10kt of nickel to BHP per year. BHP uses it for its Kalgoorlie nickel smelter factory that produces nickel matte, which is then used in BHP’s recently launched Australia’s first nickel sulfate plant. Kalgoorlie smelter factory runs at 110kt annual capacity.

The current buyer IGO is also one of the main nickel suppliers to BHP. IGO has one nickel mine (Nova) that produces around 30kt of nickel, most of which also goes to BHP. A few years ago IGO was contemplating building its own nickel sulfate plant, however, the plans were scrapped due to the limited remaining life of its only nickel mine (currently estimated mine life is 6 years). It was said that this plan could be revisited if IGO could secure a mine with longer life:

It is something that sits permanently on the backburner bubbling away but we really need the catalysts around longer-dated nickel sulphide supply to be able to look at that more aggressively.

We were looking for 10 years of supply.

The pending merger with WSA and its Odysseys 10+ life of mine fits perfectly into the story. As stated by the WSA managing director, WSA is one of the few nickel sulfide mining companies that have clear sight towards sustained nickel production into the 2030s. Certain analysts have been saying that this transaction could give both firms independence from BHP.

All of this clearly allows space for the speculation that BHP could also be interested in WSA:

This is the difficult part and I have limited knowledge to fill this gap, especially as a large part of production is not online yet. The Feasibility study of Odysseus mine indicates that at the current AUD/USD exchange rate, US$9/lb nickel price and 7% discount rate pre-tax NPV of the Odysseus mine stands at A$783m (at P&P resource level) vs IGO’s bid price at A$1096m. Meanwhile, nickel price at the moment stands 17% higher – around US$10.6/lb. The sensitivity tables in the feasibility study do not indicate the value of mine beyond the US$9/lb, however, using simple extrapolation (+A$90m per $0.5/lb nickel price change), I arrive at Odysseus mine value of A$950m. I have no idea though, if this NPV calculation has any real-world meaning and whether nickel assets mine are actually changing hands at their assessed NPV values.

IGO’s current bid seems to account only for the NPV of Odysseus mine (at lower than current nickel prices) and attaches little to no value to the remaining operations at Forrestania as well as other prospective Cosmos mines that are currently in the feasibility/pre-feasibility phases. Forrestania still seems to be able to operate at FY21 capacity for nearly two years (30kt reserves, US$3-US$3.30/lbs cash costs). In FY21 WSA generated A$73m EBITDA at a 30% lower average nickel price vs current prices. In two years that could potentially deliver at least another A$150m (13% of current market cap) in EBITDA if the nickel strip holds. Meanwhile, Mt Goode is estimated to be an even larger mine than Odysseus and if pre-feasibility/DFS studies go well, could potentially be launched in a 4-5 years timeline.