Our tracking portfolio has returned +2.6% during Apr’22 and is +10% YTD. A detailed performance breakdown is provided below.

During the month we have published 5 new ideas and closed 7 ideas.

33 ideas are currently active on SSI.

The graph below details the individual MoM performance of all ideas that were active during the month of April 2022. This chart excludes Quick Ideas. 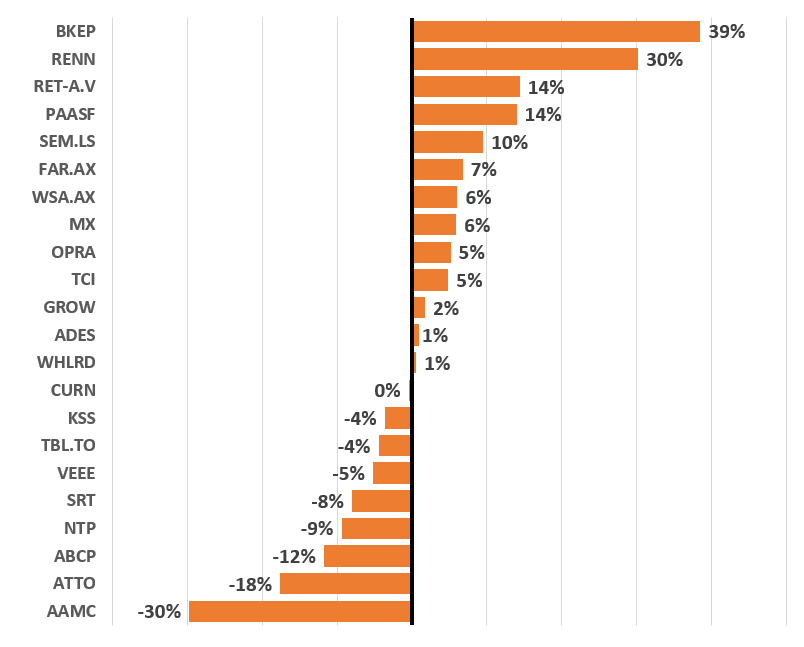 Blueknight Energy Partners (BKEP) +42% in 3 Months
Blueknight Energy Partners was an MLP operating the largest independently owned network of asphalt terminals in the U.S. Its general partner and the largest unitholder (31% of economic interest), Ergon, was trying to steal the company on the cheap for the second time in the recent years – now at $3.32/unit price. BKEP’s share price was trading around/just below it. The offer had to be approved by the conflicts committee which was expected to reject it as being too low. The offer was clearly opportunistic and at only tiny premium to pre-announcement prices. This provoked outrage from common unitholders (including a major shareholder with 9.2% stake), who wrote multiple public letters alleging Ergon of artificially depressing BKEP’s cash distributions and share price before the takeover. Multiple industry tailwinds and strong/stable cashflows suggested easily achievable cash distribution increases to the point where a price target at around $5+/share seemed much more reasonable. Ergon was a knowledgeable strategic buyer and given a substantial headroom for a price lift, the improved offer seemed likely. Eventually, everything played out exactly as expected and special committee renegotiated a new price at $4.65/share.

Western Areas (WSA.AX) +12% in 2.5 Months
Major Australian nickel miner Western Areas was to be acquired by larger mining peer IGO at A$3.36/share in cash. The deal was supported by a major shareholder with 14.7% stake. WSA shares were trading 3% above the offer price due to anticipated competing bid from Wyloo, which had been accumulating shares at/above the offer price (9% stake at the time). A competing bid from BHP also seemed likely and would have resulted in strong strategic benefits. The downside seemed well protected by the existing bid as well as WSA peers trading materially since the merger announcement due to soaring nickel prices. Eventually, sufficient shareholder pushback forced WSA management to renegotiate the price with IGO to A$3.87/share (15% premium over the initial bid). The idea was closed with a +12% gain in 2.5 months.

Renren (RENN) +12% in 6 months
Renren’s settlement was expected to net RENN shareholders at least $25.84/share in addition to $1.7/share stub value and a further $5/share from reduced legal fees. Shares were trading at $25/share suggesting uspide of 20%+. However, an ex-shareholder filed an appeal arguing that the settlement should go to the historical shareholders at the time of wrongdoing (2018) instead of the current/recent shareholders – meaning that current owners of RENN stock would only receive the stub value, likely $1-$2/share. The judge, surprisingly, agreed to proceed with this claim. RENN’s share price got immediately cut in half. However, the derivative nature of the lawsuit suggested that eventually, the original settlement would prevail. The derivative appeal was filed and recent court hearings seemed to indicate that the original settlement potentially with some amendments will hold ground, however, optionality from reduced legal fees might be no longer in the cards. With RENN shares now trading above the settlement distribution + expected stub value, we have closed the case with a 12+% gain.

Reitmans Canada (RET-A.V) -15% in 3 Months
Reitmans Canada is a Canadian family-controlled brick and mortar apparel retailer, that had recently exited bankruptcy. Reitmans managed to sail through bankruptcy without diluting shareholders and emerged as a much leaner business with lower operating expenses, improved margins and net cash position. As with many retailers, the company reported very strong Q2 and Q3 numbers. The most recent bankruptcy monitor reports indicated even stronger Q4 results. Despite that, Reitmans was trading at just 1.8x trailing EBITDA, materially below peers, and had several other potential catalysts lined up – uplisting to main TSX exchange and dividend reinstatement. Unfortunately, Q4’21 performance turned out to be much weaker than expected (material margin and profitability declines) indicating that strong mid-year quarters might’ve been just a one-off post-COVID boost. Weak FCF generation pretty much eliminated the chance of near-term dividend reinstatement as well. The idea was closed due to a substantial risk of further performance deterioration.

Amarillo Gold (AGC.V) +11% in 4 months
Junior gold miner Amarillo Gold entered into a definitive merger agreement to be acquired by its peer Hochschild Mining. The consideration was C$0.4/share plus 1 share of a new publicly-traded spin-co with an additional cash injection of C$10m. The transaction appeared to be very likely to close successfully in short order. The spin-co held all assets and rights of the Lavras do Sul gold project in Brasil + a 2% smelter royalty on certain other Amarillo exploration properties. Based on previous land transactions, the estimated value of the spin-co stood C$0.07 per AGC share. As expected the merger closed shortly and Lavras Gold shares settled slightly below expectations at around C$0.045. The idea still resulted in a low risk +11% gain in 2 months.

LXP Industrial Trust (LXP) -13% in 2 months
Warehouse/distribution center REIT LXP Industrial Trust was targeted by REIT activist Land & Buildings, which proposed a non-binding offer at $16/share. The spread stood at 6% at the time. However, the activist made it clear that the offer might be increased after due diligence. Shortly after, LXP announced a strategic review to explore options, including a sale. LXP was trading at a substantial discount to all warehouse/DC (distribution center) peers, including MNR, which had been a target of a bidding war a year prior, with the final bid ending up at a 4% cap rate and 25x FFO. Valuation closer to MNR would have resulted in an LXP price target at around $18-$20/share. However, the strategic review was suspended stating “significant changes to macroeconomic, geopolitical and financing conditions” since the start of the review. As a result of the suspension, the idea was closed with a -13% loss in 2 months.

iClick Interactive Asia Group (ICLK) -87% In 6 Months
Chinese marketing cloud platform services company Click Interactive received two non-binding acquisition proposals from PE buyers. The first one came from Oasis Management and PAG Pegasus at $6.75/share on the 24th of September. A month later Infinity Equity Management offered $7.50/share. Following the second offer, the company formed a special committee and hired Nomura International. Management had 11% economic and 62% voting interest in the company. Both buyer groups expected management together with some other shareholders to join the consortiums and roll the ownership. However, ICLK share price got destroyed due to the Chinese tech crackdown and overall negative market sentiment towards the Chinese stocks. Management hadn’t provided any updates on the sale, while the newest Q4/annual results were weak. Hence, we removed the idea from the active cases as the thesis is no longer valid.