This is an interesting arbitrage in the agricultural biological industry with some hedging risk.

On the 17th of March, agricultural biologicals company Marrone Bio Innovations announced that it will be acquired by its larger peer Bioceres Crop Solutions at 0.088 BIOX shares per each MBII ($200m+ total value). The transaction is subject to MBII shareholder and US antitrust approvals as well as the successful application of BIOX to uplist to Nasdaq from the current Nasdaq-GS. All of these conditions seem to be a mere formality and closing is expected in Q3 2022. A wide 16% spread on the merger is likely the result of limited borrow availability for hedging – currently IB shows only around 10k shortable shares ($120k total) at 8% annual fee, which would cut the upside by 2-3%. There is an obvious risk of borrow rates spiking upwards, but so far they have stayed flat around current levels since the merger announcement.

Given this merger is basically a done deal, the spread looks somewhat overblown. Aside from hedging risks/availability, another possible reason might be micro-cap nature of the transaction ($610m buying out $200m) as well as companies operating in the agricultural biologicals industry. This is a rather young, fast-growing, but somewhat speculative industry that many investors are still rather skeptical on. In this sense, this arbitrage might be somewhat similar to multiple lucrative arb opportunities covered by SSI in the cannabis space last year (LHSIF, KHSB, CLIQ.TO, ISH.CN).

In case the merger fails, the downside to the pre-announcement price is c. 30%.

MBII shareholder approval is guaranteed by the agreements of support from two major shareholders – own 49% combined. Antitrust approval also seems to be just a formality – the combined company will have $250m revenues vs a $12.6bn market size globally. Both companies sell in different geographies and only 1.2% ($2.5m) of current BIOX revenues are from the US.

The strategic rationale is strong. Both companies sell biological controls (seed protection, enhancement, nutrition, etc.) to replace chemicals in farming. MBII and BIOX operate in different geographies – the target operates mostly in NA (the fastest-growing Agricultural Biologicals market in the world) and Europe whereas the buyer mostly sells to LATAM customers. The portfolios are also highly complementary: 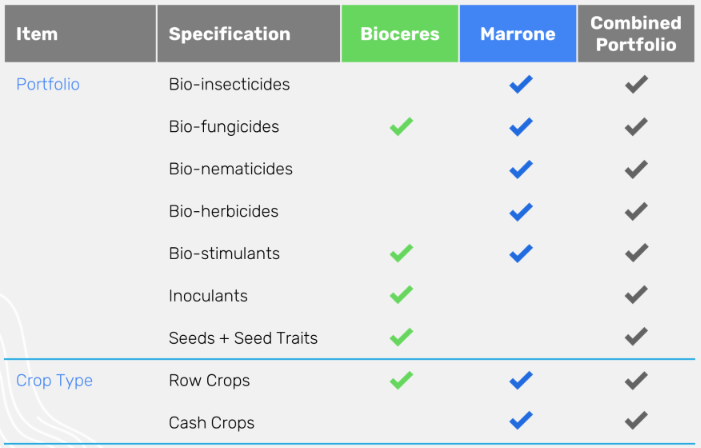 BIOX management explained that if not for this merger, it would’ve been very difficult, expensive, and take many years to replicate MBII’s current portfolio by themselves:

Analyst:  Great. Also, kind of curious, and maybe this is one for the Bioceres team, your sense of the value of Marrone’s portfolio; is there a real scarcity of these types of solutions out there? Do you feel like your customers, in a sense, are clamoring for the solutions and unable to find them, from the current kind of landscape, is there a real scarcity value that you guys have brought into your portfolio?
BIOX: Bobby, absolutely. I think we took a lot of time in analyzing the landscape, what we were lacking from a portfolio perspective, to be able to move forward in our vision of regenerative agriculture and sustainable products, was exactly what Marrone had in its portfolio, which by the way, it’s not cheap to replicate. Also, we saw a portfolio that would probably take many, many years, close to a decade, in developing, that will cost us much more than what we are today, and how that’s seen as the transaction price, and that has been already commercially evaluated; that has been tested by farmers, and has repeated trials. It’s almost at the tip of the iceberg in terms of the wrong way that we expect from these different bio control products.

MBII has not ever made a profit yet, despite its rapidly growing top line (32% CAGR since 2017). However, the losses are clearly shrinking and in FY21 the company has already been cashflow positive if you exclude R&D spending (around $11m). The company is currently at an inflection point. The merger is expected to result in $8m cost synergies (mostly from public and other related costs elimination) and about $20m top-line synergies from cross-selling, etc. So these synergies alone should put MBII cashflows above breakeven.

MBII has a pipeline of 20 biological products under development, which according to the company’s estimates have the potential to add $50m of revenue by 2026. The star product in development, bioinsecticide MBI-306, has already been submitted for regulatory approval in the US and is expected to be launched in 2023/2024. MBII management says “We anticipate this product will deliver peak potential revenue of approximately $100 million per year”.

BIOX management has been quite open that they are using this opportunity as a “last chance” to acquire MBII. Another Bioceres acquisition of Rizobacter done back in 2016 seems to have worked out really well even though it was acquired at what seemed to be a high multiple. BIOX acquired a controlling stake at 14x EBITDA. Since then Rizobacter’s EBITDA has increased 4x and it is now one of the largest soy inoculant product providers in the world. As per management’s comments:

One question that you may ask yourself is, why are we doing this now? This is by no means a cheap acquisition for Bioceres but we’re convinced this is probably our last chance to integrate a commercially validated and highly complementary portfolio. Like MBI’s. Replicating MBI’s position in the biological space would take us many years and cost us much more.

In the short term, releasing MBI from the burden of being a politically entity, to execute $8 million in costs synergies. Mostly coming from in particularly corporate costs, could take the company as a standard in business, to at least breakeven quite soon, without the need to jeopardize future value by cutting down R and B spending.

When you go back to Rizobacter when we did that in 2016, we paid 14 times EBITDA, and that wasn’t seen as cheap at the moment. Now, look what happened afterwards, that company had the building capabilities to grow four times, just by taking care of some financial constraints and by empowering the team to become a winning team. And that’s exactly what we intend to do with Marrone today.

BIOX is significantly larger compared to the target and has been consistently profitable, yet slower growing (see table below). The combined company will be cashflow positive and have $100m in cash for further product development.

Aside from already existing product portfolio, BIOX’es development pipeline is mostly focused on its HB4 family of products for seed enhancement, which makes seeds more resistant to drought. The company says that HB4 helps to increase the crop yield by 15-20% in episodes of sporadic drought. The commercial stage is just around the corner – approvals from most countries have already been received. China was the latest one to approve HB4 Soy two weeks ago, which resulted in a 20% share price jump. BIOX is already trying out the technology in Argentina – 23k hectares have been planted in Q2 FY22 (ending Dec’21) and 52% of harvesting has been completed. The full commercial launch of HB4 Wheat is expected this year and HB4 Soy in 2023. The company estimates that HB4 Soy and HB4 Wheat will contribute incremental $35-$45m EBITDA in 2025. Updated operational estimates will be provided with FY22 results (Oct’22) after collecting the harvesting data.

BIOX became public through SPAC at the end of 2018 and had its share price destroyed after lock-up expirations at the start of 2019. All SPAC warrants were redeemed in 2019. Pre-SPAC owners continue to hold a controlling stake in the company. In 2021 the share price jumped up due to positive developments on HB4. So the upcoming update on the harvesting results and operational estimates should be a big event, however, the results are likely to come out at the end of September and the merger will likely close before that.