This idea was hinted by Paul.

Dolphin Capital (DCI) is a London AIM-listed, £32m market cap real estate company undergoing liquidation. The potential upside could be close to 100% or higher, however, liquidity is extremely limited.

DCI is a luxury real estate holding firm with most assets in the Mediterranean (Greece/Cyprus) – resorts under development and undeveloped scenic land (whole peninsulas). Due to the self-enriching track record of the management and very limited liquidity (shares are tightly held), DCI.L trades at a 75% discount to the reported NAV of £123m (£0.135/share). The credibility of the reported NAV calculations is questionable, but even with large haircuts, there still is a 93% upside to the conservative estimate of distributions of £0.067/share (after liquidation expenses and incentive fees).

The major risk is getting in bed with Miltos Kambourides (founder/investment manager), who has a track record of enriching himself at the expense of shareholders. However, the DCI has recently implemented a number of highly positive governance/incentive scheme changes, which finally re-aligned investment managers’ incentives with the shareholders. That and a very large margin of safety as per the discount to BV, suggest that the risk of losing money here now is low.

Dolphin Capital is truly a textbook example of long term shareholder value destruction – DCI raised €1 billion of equity, listed on AIM in 2005, started trading around £0.78/share, reached £1.7/share in mid’07, got destroyed during GFC, and dropped to £0.4-£0.5/share levels, and now trades at £0.035/share (£30m market cap) without returning any cash to shareholders ever.

The company’s investment manager is Dolphin Capital Partners, controlled by Miltos Kambourides, who also sits on the DCI board. In 2016 the board decided to wind down the company and received shareholder approval. The liquidation was supposed to be done in 3 years but was extended in 2019 until the end of 2021. During these 6 years, the company managed to sell only around a third of its NAV and still made no shareholder distributions. The main problem was that the whole incentive scheme was structured poorly and basically incentivized the investment manager to stall the process as long as possible while pocketing massive fixed fees – around €25.5m since 2016.

However, last year, right before the investment managers’ agreement was set to expire (end’21), a lot of positive changes have taken place:

Putting it all together it kind of seems like DCI has finally received some pushback/pressure from shareholders and now the investment manager is finally forced and incentivized to liquidate the company.

The major/core RE assets consist of stakes in 2 luxury resorts in Greece that are currently under construction – Kilada Resort and One & Only Kea Island Resort – as well as an equity stake in Cyprus’ top real estate developer Aristos. Other assets are 5 mostly undeveloped land properties in Greece/Cyprus/Croatia, whole peninsulas in some cases (annual report, website).

All debt is at the property level, non-recourse to DCI. Kilada and Kea Island resorts are fully financed, so DCI doesn’t have exposure to any future development expenses.

The company doesn’t provide many details on the asset values, however, the total value of the assets seems to be €204m as of the June’21. 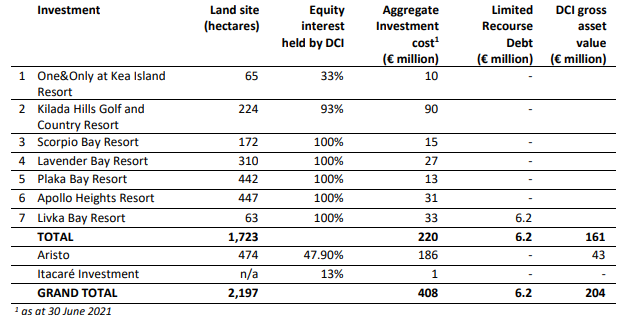 Property valuations have been done by independent valuators, e.g. American Appraisal and Colliers, however, given the nature/location of the assets and current market conditions, it’s not clear how reliable the valuations are. Even in the 2016 wind-up agreement the company clearly emphasized that asset sales might happen at a material discount to NAV and the investment manager’s variable fee was based on the asset sale valuation range starting from a 50% discount to NAV. Valuations of previous sale transactions are a mixed bag – most smaller deals were done around BV, however, a larger one, Panama was sold in 2016 at a 32% discount to gross carrying value:

The value for Kilada and Kea Island Resort properties should be estimated the most accurately of all DCI’s assets. Those are both large commercial properties, which have already started selling residences, and should also be the most liquid assets in the portfolio. The company states that in general the supply of development-stage luxury resort assets in Greece is poor and once the construction is completed (summer 2022 for Kea Island, end 2023 for Kilada), DCI’s resorts will have an appeal to a larger investment audience.

However, the situation in Cyprus is worse as its RE market has been strongly impacted not only by COVID/lagging tourism but also by the terminated citizenship-for-investment program in 2021. The program gave citizenship to everyone who made investments in Cyprus above €2.2m, which used to be a strong driver of the RE market. The program was terminated at the request of the EU. As for the COVID impact, DCI’s reports show that in 2020 DCI had a share loss of €9.4m for its stake in Aristo vs a €1.3m profit in 2019. DCI itself states that the relationship with Aristo has been complex – Aristo’s controlling shareholder has pretty much defaulted on DCI two times already (see more details below). Overall, it’s quite likely that the Aristo stake’s value is significantly lower than it sits on DCI books (€43m).

Land assets are quite large in terms of area size and all are at various stages of permitting. The company has also said that due to the ongoing issue with Greek, and Cypriot bank non-performing loans, debt financing for financial investors such as DCI is unavailable. So overall, it’s quite likely that these five properties will be difficult to sell (especially in Cyprus).

So for an optimistic scenario, we’re using management’s NAV estimate of €145m. For a more conservative scenario, we assume Aristo’s stake value to be zero and put a 20% discount on the remaining NAV. 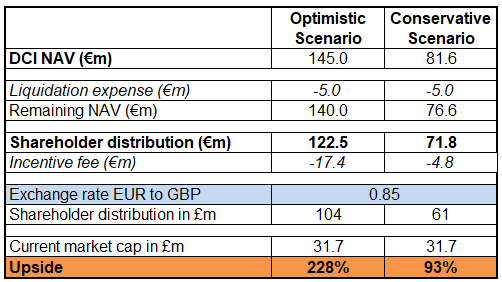 A Conservative scenario of available shareholder distributions at €72m might be even too conservative. given that the investment manager’s incentive scheme is clearly structured for the highest compensation in the distribution range of €80-€100m.

More details on the assets

Kilada Resort – 93% stake held by DCI. 224 ha site composed of 18-hole Jack Nicklaus golf course, clubhouse, 260 golf residences, and a beach club. Phase 1 has been fully funded. As of June’21 all key contractors had been appointed and earthworks for half of the project area had been done. Completion is expected by the end of 2023. Phase 2 also includes a 100-room hotel and 88 branded villas, but apparently, the company intends to sell Kilada after Phase 1.

In August 2019, DCI sold 15% stake in Kilada for €12m to some international investor who agreed to subscribe for both common and pref shares. €6m pref shares have been issued in June’21. The sale valued the project at €80m.

As of Aug’21 9 sales of private homes have been completed and additional 4 sale agreements were expected to be signed by the end of the year. DCI said the total sale value of the 13 properties would’ve been €45m. So all 20 private homes should be worth around €69m.

Resort villas are on sale ranging from €1m to €3.9m per property.

Aristo – 47.9% stake owned by DCI. Largest residential RE developer in Cyprus. Has over 60 mid-scale development projects under construction. DCI itself that relationship with Aristos has been long and complex.

DCI retained a 49.75% stake, which book value was marked at €186m. Then in September 2016, DCI suddenly announced that it is selling the remaining Aristo stake to Aristodemou for €45m cash, 76% discount to BV. However, in May 2017, the transaction was canceled as Aristodemou defaulted on the payments. DCI received only €1.8m, the stake was lowered to 47.9% and its value has been written off to €43m.

Another interesting episode happened in August 2019 – DCI agreed to sell 37ha in its former Venus Rock project to another one of Aristodemou’s companies – Aristo Ktimatiki for €4m. The buyer paid only €0.5m and the remaining €3.5m is still in default. 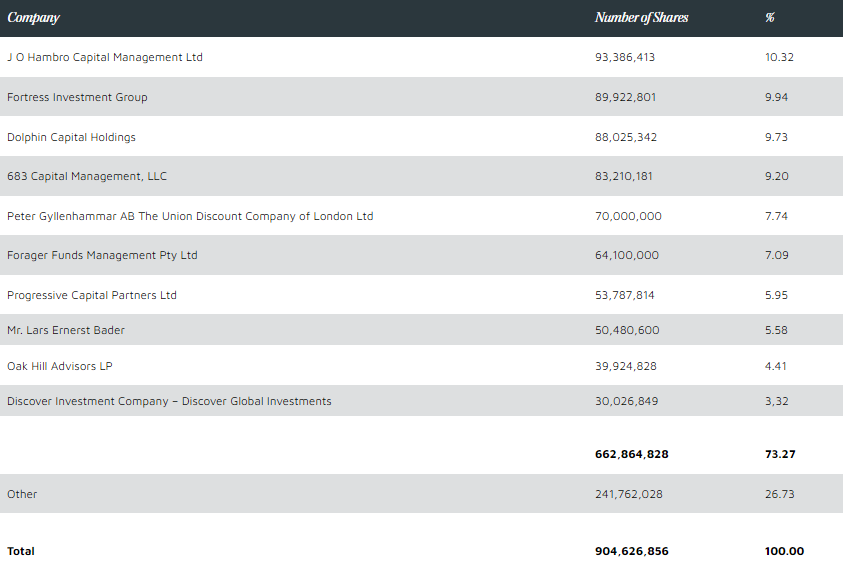