Another potential buyout of MLP by its GP. Two similar transactions have already been covered on SSI – BKEP and SHLX (still active).

Last week PBF Energy (PBF) announced that it intends to buy out the 52% public PBFX stake. It was also mentioned that a non-binding offer could be presented at any time. PBFX now trades 11% above the pre-announcement prices. I think the eventual takeover will happen at a premium to current levels at around $18-$19/share (15%-20% likely upside). The risk of losing money is limited and in the worst-case, downside to pre-announcement levels is 10%. The current dividend yield (7.7%) of PBFX is ‘artificially’ depressed, due to large dividend cut during COVID. However, earnings are materially above pre-covid levels and dividend coverage now stands at 2.5x. Assuming it reverts back to 1.2x (in line with historical levels and peers), the yield would be 13%, showing plenty of scope for a higher offer.

The buyout makes sense. MLP structure is outdated and no longer has any reason to exist. That’s why many MLPs have already disappeared over the last 4-5 years. GPs usually have strong incentives to acquire the LPs themselves – fund the acquisition with low-cost debt and get a high-yielding stock + realize some operational synergies. See below for more recent precedent of MLP buyouts.

The timing of this acquisition seems opportunistic – after the 40% dividend cut in 2020, PBFX yield (and in turn share price, as it is driven mostly by yield) is no longer reflective of its earnings power. This was done not because of worsening financial performance (revenues and earnings actually went up), but more as a conservative/cautious move to focus on deleveraging. As result, the coverage ratio (cash flow available for distribution divided by dividends paid) increased from 1.1x to the current 2.4x. Peers have 1.2x-1.7x ratios. None of the other peers (except for HEP) have cut dividends but have actually gradually increased them since the onset of the pandemic. Based on 2022 guidance it seems like PBFX could easily be able to bring back the dividends to pre-covid levels and still operate at 1.2x distribution coverage ratio. At that level, the adjusted yield at current prices would be 13% – way above yields paid out by peers.

The company used undistributed cash to pay down debt and reduce Net Debt/EBITDA leverage to 2.4x. PBFX now has a much stronger balance sheet compared to historical levels. The leverage also sits below that of peers, which tend to have leverage targets of low 3x and actual ratios above this figure.

With COVID uncertainty now gone and balance sheet clean, the company will not be able to keep the dividends suppressed for long – in the last conf. call management noted aiming to repay the remaining $75m of the revolving credit facility (which might take couple more quarters) before evaluating further capital allocation opportunities. The total debt consists of $523m of 6.875% senior notes and a $75m revolving credit facility. The notes mature in 2023 and management does not expect any issues with refinancing, but want to repay the revolving facility to make the refinancing of notes easier. Given the company’s leverage position, the backing of the GP, and overall oil industry tailwinds, refinancing at similar terms shouldn’t be an issue. For example, similar-sized peer HEP raised $400m senior notes at 6.375% in April’22, MPLX (much larger peer) raised $1.5bn at 4.95% this March, DKL raised $400m last May at 7.125%.

– Spiro Michael Dounis Crédit Suisse AG, Research Division – Director
First question, 2-part question just on capital allocation and leverage. I guess if you think about the current pace of deleveraging, you guys just took down another $25 million. If that pace continues, it looks like the credit facility will basically be repaid in about 3 quarters. So I’m just curious, is that maybe when you start looking at alternative uses of cash and potentially recommencing distribution growth? Second part of this question, you mentioned the 2023 notes. It doesn’t sound like you’re waiting until May to refinance those. So maybe just help us think about the timing and how you’re thinking about getting that done.

– Matthew C. Lucey PBF Logistics LP – Executive VP & Director of PBF Logistics GP LLC
I’ll take the first, and then Erik can take the second, which is, obviously, we’re in the midst of historically disruptive times in the world and to predict what the world is going to look like in a year is not telling in our purview at the moment. We’re focused on what we’re doing today. And today, we’re continuing to pay debt. And once we get to that point where all the revolver debt will be repaid, we can evaluate other opportunities. But good operations and focusing on paying down debt is where our focus is today. Erik?

– C. Erik Young PBF Logistics LP – Senior VP, CFO & Director of PBF Logistics GP LLC
On the revolver, the concept that we started to employ a few years ago was to provide as much flexibility as possible in terms of what may come at us in the future. And as we sit here today, we are trying to balance what the appropriate level of floating rate along with fixed-rate debt, at the same time, matching up tenor with contract life. And ultimately, the overall mix between revolving debt that can be borrowed to pay down versus term debt that ultimately has an unsecured structure, assume some type of no-call provision, but we believe there are multiple ways to finance PBF Logistics. First priority, quite frankly, is to focus on the PBF Energy ABL getting that done. There’s a lot of bank crossover between the 2 facilities. So our view has been, let’s get priority #1 done on the large ABL, and then we will be able to transition and use that positive momentum with a successful refinancing effort on PBF Logistics.

Seems like in the absence of take-private, dividend increase to pre-covid levels would be imminent. This not only limits the downside but also makes it unlikely for PBFX buyout to take place at current price levels, without reflecting the actual earnings power of the company. I think a reasonable price target for a buyout would be $18-$19/unit. That’s still a decent discount to PBFX’s stable $20-$22/unit trading range pre-COVID and an attractive 11% acquisition yield for the buyer.

PBFX situation differs from the one at SHLX (another currently ongoing MLP buyout covered on SSI), with PBFX having a stronger case in terms of offer coming at a premium to current prices. SHLX dividends have been temporarily suppressed because of certain issues related to its assets and there’s uncertainty there about when/how these issues get resolved. SHLX GP can much more easily navigate the arguments on why the buyout doesn’t reflect historical earnings power, etc.

The main risk is that the PBF will still try to lowball the offer at no premium to current prices – getting the additional 2% votes on top of the currently owned 48% to secure majority approval should not be an issue. However, even if that will be the case at the stage of the non-binding bid, multiple recent precedents suggest that the final bid will get raised after the strategic committee review process. In all of the recent transactions, the initial bids had been increased quite substantially before the definitive agreements were signed. Given these precedent transactions and the fact that negotiations with the strategic committee have probably been started (it’s quite unusual to announce that the offer will be made shortly), it’s possible that PBF will want to shorten the timeline and place a more appealing bid right from the start.

PBF Energy is a large petroleum refinery and transportation fuel supplier (listed on NYSE, $4bn market cap), whereas PBF Logistics has been set up back in 2013 as a midstream (pipeline/terminals/storage) services provider for PBF refineries. PBF generates 85% of the revenues for PBFX. The remaining 15% of revenue is generated through services provided to third-party refiners, etc. 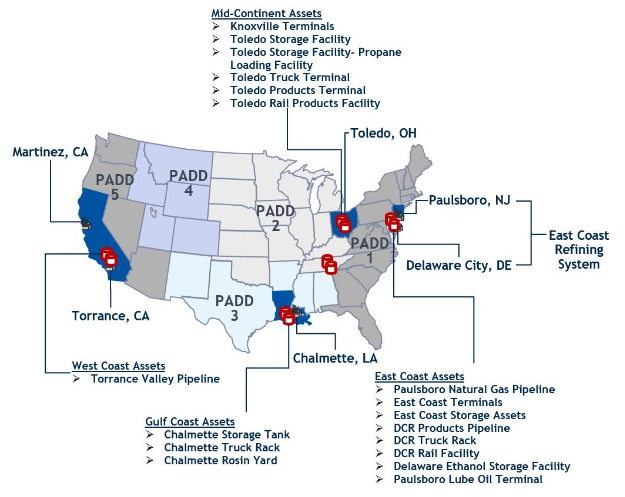 Note: a slight decline in 2022 EBITDA guidance is mostly due to lower minimum volume commitments from PBF’s East Coast rail facilities, which are undergoing a turnaround.

Around 25-30% of the cash flows are secured through minimum volume commitments (MVC) that are included in PBFX contracts. The MVC level is quite low compared to some peers (HEP – 76%, DKL – 39%), however, that is likely the result of higher portion of revenues coming from the GP (79% for HEP and 49% for DKL).

Contracts also include inflation adjustments, although the exact details are not provided. In the last conf. call management said that they do have escalators built-in and the partnership is protected from inflation:

– Crédit Suisse AG, Research Division – Director
Got it. Helpful color. Second one, just moving to inflation. Curious how you guys are thinking about the impact of any inflation or even supply chain issues on the system. I imagine you’ve got escalators in your contracts to help pass that on, but just curious if you’re seeing any impact yet.

– Executive VP & Director of PBF Logistics GP LLC
Certainly seeing some impact. But yes, the way our contracts were constructed, it did have the concept of escalators built in. So I think the partnership is pretty well insulated. Inflation is not equal across the board. So you’re seeing it stronger in certain areas and less than others. And we’ve been working certainly with and we’ll continue to work with our largest customer being PBF to make sure that we’ve got a relationship that works on both sides, but it’s been manageable from PBFX’ perspective.

I admit I do not fully understand if this is truly relevant, but it might be an additional reason for the MLP structure losing relevance in the wider PBF group. If anyone has any further color on this, feel free to share.

PBF Energy has recently started developing a new large renewable diesel facility in Chalmette refinery, nearby where PBFX also has several assets (storage tanks, truck rack, etc.). As an MLP, PBFX is not able to participate in the project as current regulations don’t allow renewable diesel activities as a source of allowable/qualified income for MLPs (allowable income must be not less than 90% of total income). From Q4’21 conf. call:

– Matthew C. Lucey PBF Logistics LP – Executive VP & Director of PBF Logistics GP LLC
Currently, part of allowable income for the MLP does not include renewable diesel activities. That being said, PBFX has 0 unqualified income. So there’s some room for PBFX to participate in the project, just using unqualified income today, but there’s also the prospect that legislation can change around what’s defined as qualified income. So we’ll stay close to that, but that essentially summarizes where PBFX could play in today.