Our tracking portfolio to a big dive of -13.3% during June’22 and is down 8.7% YTD. The monthly move was somewhat ahead of the 9.5% decline in the S&P. A detailed performance breakdown is provided below.

During the month we published 6 new ideas. 7 ideas were closed, four of them at a profit.

The graph below details the individual MoM performance of all ideas that were active during the month of June 2022. This chart excludes Quick Ideas. 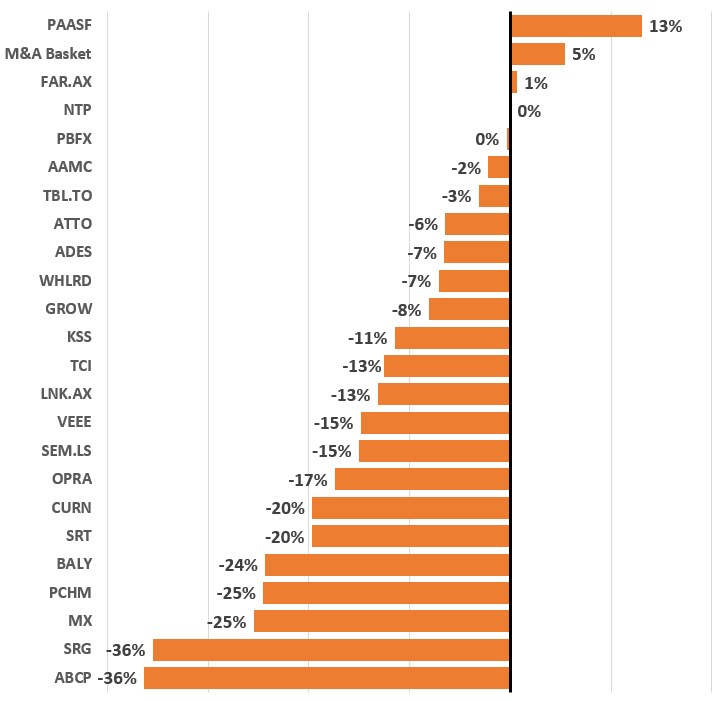 Bally’s (BALY) -19% In 1.5 Month
US casino and online gaming operator Bally’s rejected a takeover offer from its major shareholder at $38/share and promised to launch a large $300m-$500m tender offer. The rejected bid, coupled with managements confidence on how undervalued the business is suggested the offer will come at premium prices. However, due to the market sell-off BALY’s stock tumbled down. Therefore, the announced tender turned out to be at much lower prices ($19.25-$22/share range) than expected. The size was also lower ($190m). Odd-lot provision is included. The offer expires on July 22. Insiders own 34% and will announce whether to tender or not only 6 days before expiration. This hesitation to disclose participating is puzzling. On top of that, the recently issued 3-year cash flow forecast indicated that no more buybacks are planned for this year and only limited buybacks might be in the cards in the following years. Overall, the higher tender price thesis did not pan out and we closed the idea with 19% loss.

Genesis Metals (GIS.V) +20% in 2 weeks
Merger arb in Canadian gold exploration industry. Spread stood at 26% initially and then narrowed down to 4% on no merger-related news, resulting in quick 20% gains. Over the last couple of weeks the spread widened again and the case was reopened.

BlueCity (BLCT) +15% In 1 Month
A U.S.-listed Chinese going private transaction. BlueCity entered into a definitive going-private transaction with a consortium led by the company’s founder. The offer came at $1.6/ADS or $1.55/share excluding the ADS fee. 20%+ spread was outstanding at the time, which seemed too wide for a deal with a definitive agreement in place (at least from a historical precedent perspective). The buyers appeared incentivized to close the transaction on terms as the price implied a negative EV for BLCT and was at just 10% of the IPO price from two years ago. Once the shareholder meeting date was announced (July 29), the spread narrowed to <5%. Given the reduced spread, the remaining timeline and Chinese ADS-related risks we closed the idea with +15% gain in one month.

Marrone Bio Innovations (MBII) +11% In 1.5 Months
Agricultural biologicals company Marrone Bio Innovations is getting acquired by its larger peer Bioceres Crop Solutions at 0.088 BIOX shares per each MBII. At the time of posting, shareholder approval and regulatory conditions seemed to be a formality, so the 16% spread was mainly driven by expensive borrow (8% fee) and the unpopular/under-the-radar industry in which both companies were operating. The borrow fee seemed stable reducing the risk of a large spike/forced-buy-in. As expected, the spread gradually narrowed down to 4% without any merger-related news and we marked 11% profit in 1.5 months.

Metromile (MILE) +8.5% In 1 Week
All stock arbitrage play in insure-tech industry. Home and pet insurance provider Lemonade ($1.2bn market cap) is acquiring car insurer Metromile. Consideration of 0.05263 LMND shares for each MILE share. At the time of posting, the spread stood at 13%. All major conditions had been satisfied and the wise spread seemed to be driven only by the market turmoil and expensive hedging. However, the merger was expected to close in a few weeks and borrow rate had been stable over the last few months. In less than a week the spread narrowed to 4.5%. As risk/reward no longer seems that favorable, we have closed MILE arbitrage with an 8.5% gain in a week.

Tufin Software Technologies (TUFN) +6.5% In 2 Weeks
NYSE-listed Israeli-based cybersecurity automation software provider TUFN is getting acquired by a PE firm Turn/River Capital at $13/share in cash. At the time of posting, all major conditions had been satisfied and this looked like a done deal. The buyer appeared credible and well-experienced in the target company’s industry. However, due to the market turbulence and price adjustments on a similar large-cap deal, TUFN arb spread temporarily increased to 10%, which seemed excessive given minimal risks. As expected, the spread eventually narrowed down to 3.5%, and given some small remaining risks + Israelian paperwork requirements in such mergers, we decided to take a 6.5% gain in 2 weeks.

Cumulus Media (CMLS) +$250 In a Month
Great outcome for odd-lot positions with a very widespread right till the offer expiration. As the initially rumored acquisition offer did not materialize and the tender offer was significantly oversubscribed, CMLS shares declined sharply after the tender expiration, 50% below the write-up prices.