Our tracking portfolio fell -4.1% during May’22 and is up +5.3% YTD. A detailed performance breakdown is provided below.

During the month we published 9 new ideas, and moved two quick ideas to tracking portfolio cases. 7 ideas were closed.

37 ideas are currently active on SSI.

The graph below details the individual MoM performance of all ideas that were active during the month of May 2022. This chart excludes Quick Ideas. 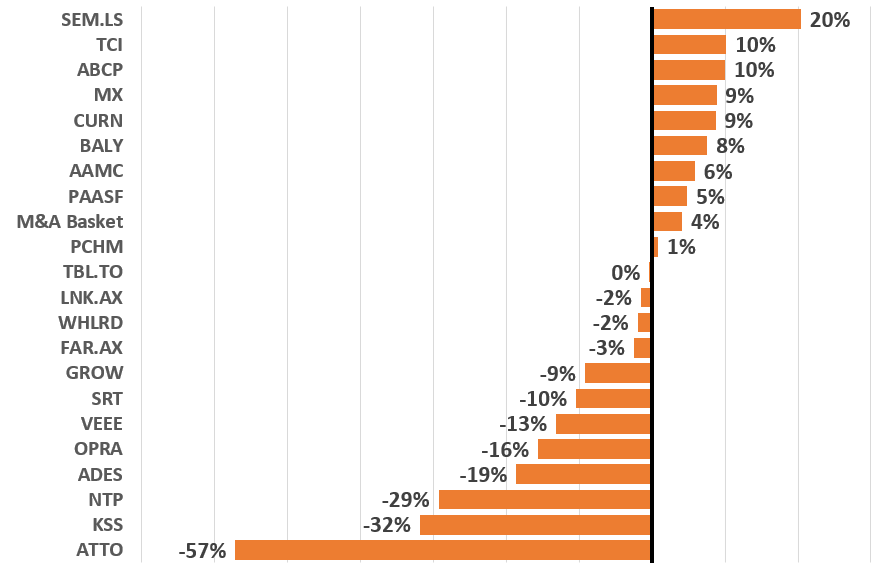 QUICK IDEAS CLOSED DURING MAY’22

River and Mercantile Group (RIV.L) +7% In 1.5 Months
UK-based asset manager River & Mercantile Group sold its UK fund administration and advisory business and planned to promptly return £2.20/share in cash to shareholders vs £2.64 share price at the time. The remaining stub was getting acquired by peer AssetCo at 0.07392 AssetCo shares per RIV share. RIV shares were trading at 21% spread to the whole consideration and 125% spread only on the stub price. There were no possibilities to hedge, but SoTP valuation of the buyer suggested a sufficient margin of safety even without hedging. Two weeks before the merger close, AssetCo’s share fell by 30% without any incremental news reducing the arb spread on the stub to 18% only (vs 125% before). Given limited remaining upside and risk of further share declines the idea was closed with 7% gain.

Hilltop Holdings (HTH) +$103 In 3 Weeks
Hilltop Holdings launched a tender offer with an odd-lot provision for $400m or 16%-18% outstanding shares. The tender range was set at $28-$32/share. HTH used to trade in the middle of the range, but in the mid of market sell-off HTH shares dropped to just above the lower limit making risk/reward attractive, especially for odd-lot positions. Management with 23% ownership was not participating in the offer, so the tender was cashing out 22% of the free float. The tender ended up over-subscribed by 10% at a final price of $29.75. The company still accepted all of the tendered shares at this price point so shareholders tendering at or below the final price were not prorated.

Imperial Oil Limited (IMO.TO) +14% In 3 Weeks
Imperial Oil, one of the largest Canadian Oil companies, launched a tender offer with an odd-lot provision for C$2.5bn or 5-6% of its shares. The tender range was set to C$62-C$78/share. With IMO shares trading slightly below the lower limit risk/reward seemed very attractive. Paid-up capital was just C$1.75/share, so this situation was actionable only for Canadian shareholders or accounts that were not liable for paying Canadian withholding taxes. The upper limit tender pricing seemed unlikely given the participation of the largest shareholder. As the stock climbed to the middle of the range, the idea was closed with +14% gain in 3 weeks.

Home Bancorp Wisconsin (HWIS) – Upside TBD
2-branch Home Savings Bank entered into a definitive agreement to be acquired by Dupaco, a private credit union with 18 locations. As usual with credit union/US bank mergers, the takeover was structured as an asset sale and subsequent wind-down. Eventual shareholder distributions were expected at $26.47-$27.32/share. Several other similar situations have closed successfully over the last few years with distributions above the estimated low limit.  HWIS traded 10% below the low end of the distribution range. Given 1.9x TBV offer price, shareholder approval was easily received and the merger closed in the beginning of May. Liquidation and dissolution are expected to happen in Q3/Q4 2022. The exact sum to be received by shareholders will be announced at a later date. The last closing price was $25.67/share.

BRP Inc. (DOO.TO) –  Negligible Upside
BRP Inc (listed in the US and Canada) launched a tender for $C250m (c. 3% of outstanding shares) at C$103-C$120/share. BRP shares were trading slightly below the lower limit presenting an option for a risk-free upside for odd-lot shareholders. However, due to Canadian incorporation and low paid-up capital, the idea was applicable only for accounts that were not subject to Canadian withholding taxes. The tender was priced at the lower limit with 91% of tendered shares getting accepted.

Link Administration (LNK.AX) – 13% In 2 Months, Moved to SSI Portfolio
At the end of 2021, Australian superannuation fund administrator Link Administration agreed to be acquired by its peer Dye & Durham at A$5.50/share in cash + A$0.15/share in the potential incremental distribution. In March, the spread widened from 2% to 13% due to concerns over regulatory approval issues. However, the market seemed to be exaggerating the risk, while shareholder approval was also likely. Then the spread widened further to 26% creating an attractive and asymmetric bet with a well-protected downside. As the situation became much more attractive we moved it among SSI portfolio ideas. The quick idea was closed with 13% loss.

Bally’s (BALY) -31% In 3.5 Months, Moved to SSI Portfolio
US casino and online gaming operator Bally’s received a non-binding takeover proposal from its largest (21%) shareholder Standard General at $38/share. The offer seemed opportunistic, lowball, and unlikely to receive shareholder support. An improved offer was expected. However, management rejected the offer and announced plans to launch tender offer for 30% shares instead. As Standard General refused to improve the offer and our merger arb case did not pan out this quick idea was closed with a 31% loss in 3.5 months. However, in light of an upcoming large tender offer and depressed share price post gaming industry sell-off, the set-up here became even more interesting and situation was moved to SSI portfolio ideas.