We are refreshing our review of all merger arbs with wide spreads. This is a continuation of the analysis from two months ago. Some of these have already been highlighted or posted on SSI. The spreads on average are not as wide as during the market rout at the beginning of July, but still, there are some potentially attractive opportunities.

For a comparison of how the merger arbs highlighted in July’s table have worked out, please check this tweet where the main changes are indicated – 4 of those already closed, for 7 the spreads narrowed materially, and only for 4 cases the spreads have widened.

In this post you will find 17 merger arbitrage situations with our quick takes on all the cases and reasons for the spread.

Some of these have already been covered on SSI Quick Pitches – LOTZ in here, DMS in here, GSMG here, CCHWF here and VLNS here. Whereas SAVE, TWTR, ATVI and TGNA are part of our Large Cap M&A basket from May.

A printable PDF as well as full descriptions below. 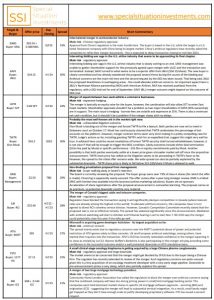 International merger in the semiconductor industry. Approval from China’s regulators is the main hurdle here. The buyer is based in the U.S, while the target is a US-listed Taiwanese company with China being its largest market. China’s antitrust regulators have recently asked the companies to refile their merger documents – this is expected to delay transaction closing to mid-late 2023.

Interesting bidding war saga in the U.S. airline industry that is slowly coming to an end. SAVE management was unable to gather shareholder support for the previously agreed-upon merger with ULCC and the transaction was terminated. Instead, SAVE turned to what seems to be a superior offer from JBLU ($34.15/share). The new buyer is clearly committed and has already sweetened the proposal several times during the course of the bidding war. Antitrust concerns are the main risk here and the second request by the DOJ has been issued. That being said, JBLU has proposed divestitures in overlapping areas – this could alleviate antitrust concerns. An important aspect here is JBLU’s Northeast Alliance partnership (NEA) with American Airlines. NEA has received pushback from the regulators, with a DOJ trial set for the end of September. SAVE-JBLU merger outcome might depend on the outcome of NEA trial.

The merger of equals between two used-vehicle e-commerce businesses. The merger is basically an equity raise for the buyer, however, the combination will also allow SFT to enter East Coast markets. Shareholder approvals shouldn’t be a problem as two major shareholders of LOTZ (25% ownership) are in support. The main issue is hedging – borrow fees are volatile and expensive at 35%. There is also a minimum net cash condition, but it shouldn’t be a problem if the merger closes with no delays.

Elon Musk is backing out of the merger and forcing TWTR to file a lawsuit. Both parties are now set to meet in Delaware court on October 17. Musk has continuously claimed that TWTR understates the percentage of bot accounts on the platform. However, merger contract terms seem very strict making it a pretty compelling case for TWTR. The judge’s actions so far, including granting TWTR’s wish for an expedited trial, suggest this might very well be true. A wildcard here could be recent revelations of former TWTR security chief turned whistleblower, however, it is not clear if that will be enough to trigger the MAC condition. Likely outcomes include either deal termination ($1bn fee paid by Musk) or specific performance – $33.5bn in equity commitments paid by Musk. Another possibility is that both parties eventually settle at a lower price given a broader market sell-off since the acquisition announcement. TWTR stock price has rallied as the litigation seems to be proceeding in TWTR’s favor so far. However, the spread to the initial offer remains wide. Widespread can also be partially explained by the substantial downside – TWTR share price is likely to fall below $15-$20/share if Musk is allowed to walk.

Non-binding privatization proposal from management. The board is currently reviewing the proposal. The buyer group owns over 73% of class A shares (for which the offer is made). Financing is apparently nearly-secured. The offer comes after a year-long strategic review. DMS is a failed SPAC with limited view available into the business (online marketing solutions). Buyers are ex-sponsors. The acceleration of share registrations after the proposal announcement is somewhat alarming. The proposal comes at a 2x premium, so the potential downside could be very material.

The merger of Canada’s biggest cable and telecom companies. Regulators have blocked the transaction saying it will significantly dampen competition in Canada (where telecom rates are already among the highest in the world). To alleviate antitrust concerns, the companies have in turn agreed to divest RCI’s wireless service division. However, Canada’s Competition Committee recently stated that the proposed sale is not an effective remedy. The spread has widened significantly since the announcement. Mediation with the antitrust watchdog will start in October and Tribunal hearing is set to start Nov 7. RCI CEO says the merger could potentially close this year if the talks go well.

Microsoft is acquiring game developer Activision – its largest acquisition so far. The spread mainly exists due to regulatory concerns over the MSFT’s potential abuse of power and potential restriction of ATVI games solely to Xbox consoles. UK and European antitrust watchdogs, among others, have started their inquiries into the transaction. ATVI’s CEO has recently reiterated confidence in the merger expecting it to close as initially by Jun’23. Warren Buffett’s Berkshire is also participating in this merger arb play providing some confidence in the successful outcome and/or a well protected downside on ATVI standalone basis.

A small clinical-stage oncology biopharma is getting acquired by a large Chinese pharma conglomerate. The market seems to be concerned that the merger might get blocked by CFIUS due to the buyer being a Chinese firm. The regulator has recently extended its review of the merger. Such regulatory concerns are quite unusual given this is a tiny acquisition of an oncology treatment developer with a very early stage pipeline. Downside to pre-announcement prices is very steep, which also partially explains the spread.

A merger of two large software platform/tech providers for mortgage originators. Community Home Lenders Association has called the regulators to block the merger over antitrust concerns saying that the combined company will have too strong pricing power in small/mid mortgage banking sector. The companies each hold dominant market shares in specific US mortgage software segments – servicing (BKI) and origination (ICE) – suggesting the merger will lead to substantial vertical integration. As a result, small banks might get trapped as they don’t have enough scale to justify developing proprietary software. FTC has issued a second request.

Broadcom is continuing diversification into cloud computing industry with one of the largest tech mergers ever. This is a mammoth $61bn deal, giving Broadcom a push into the software industry. A long and detailed probe from EU regulators is expected. Broadcom’s CEO has noted that regulatory filings have so far seen good progress in numerous geographies. The merger could take more than a year to complete.

International merger in the semiconductor industry. Spread used to stand at around 10% till May’22. The merger will require numerous antitrust and foreign investment approvals. Intel’s CEO has noted that regulatory clearance has already been received in several geographies. However, it’s likely the closing will be delayed to 2023 as apparently Chinese regulatory review hadn’t been started yet. An even bigger issue seems to be uncertainty regarding Israel’s government approval given that this is a strategically sensitive industry. Israeli withholding taxes will apply in case of successful closing – to avoid these foreign investors will require loads of paperwork (personal info, etc.), which might delay the eventual payout of the merger consideration and might explain some part of the spread.

Takeover in advanced material solutions space. ROG is an important supplier of materials for 5G networks. Most conditions have been satisfied, including shareholder approval. However the main issue remains Chinese regulatory consent, which has already been causing significant delays – the takeover was initially expected to close in Q2’22, then was postponed to Q3’22, and will probably get postponed again. Details on the process are limited. Certain sell-side shops are speculating that if the closing gets delayed beyond the termination date of Nov 1, the offer price might be reduced to reflect the changed market outlook and worse-than-expected ROG performance (the merger was first announced on Nov’21). Initially, the offer valued the company at 19x 2022 adj. EBITDA, which now increased to 28x 2022 adj. EBITDA.

Broadcasting media company is getting acquired by a consortium of buyers (mostly PE firms). The buyer consortium includes Standard General, Apollo and Cox Media. Various industry players and unions have voiced their concerns that combined TGNA/Cox Media will control too much of the market share (39% of U.S. TV households). Other concerns include potential staff reductions, lower local news coverage and renegotiation of retransmission fees. FCC has recently issued a probe into the merger. That being said, analysis of TGNA and Cox Media’s US household coverage suggests that the combined company would still be within the limits of FCC ownership rules, whereas the merger will not affect competition as Apollo and Cox Media will own non-voting shares only. Standard General’s media subsidiary generally has a good track-record on how it relates to staff and local news.

US-listed Chinese company privatization by management. The price was already raised once from the initial $1.27/share, which was rejected by the special committee. An improved offer was approved and a definitive agreement is now in place. Major shareholder US hedge fund Shah Capital is rolling its 11% stake. Shareholder approval is guaranteed (the meeting date is not set yet). GSMG is not an ADS so the standard cancellation fee will not apply. Downside is very material, which likely partially accounts for the current spread.

The merger has already received shareholder approval. Antitrust risks are low, suggesting that the transaction will close successfully. The merger exchange ratio is subject to proration adjustment by the amount of Columbia Care shares issued as an earn-out for its historical acquisition from Dec’20. Information on the earn-out is limited but the maximum stated size is $58m in CCHW shares. At current prices, the maximum earn-out would lower the exchange rate to 0.5255 and reduce the spread to 3%.

Consolidation in the Canadian cannabis space. SNDL is a serial acquirer with a track record of many successfully completed takeovers. Shareholder approval is likely as VLNS burns a ton of cash and the only short term alternative would be a highly dilutive equity raise. The transaction is highly strategic with material revenue and adj. EBITDA synergies expected. Borrow is volatile – currently at 6%, but has reached 30%+ several times earlier this year.

A merger that could create the 4th-largest gold producer. Spread seems to reflect the uncertainty around the shareholder approval conditions – consent of both the target and the buyer shareholders will be needed. Buyers’ share price declined 25% right after the transaction announcement. Major shareholders of both firms, inc. US fund Van Eck (5% GFI and 12% AUY stake) have criticized the timing and price of the proposal. That said, management teams of both companies have noted that significant progress has been made in trying to appease shareholders. Recently, GFI agreed to increase dividend payout ratio of the combined entity, suggesting that shareholders might eventually come around. The merger seems to be highly strategic for the buyer GFI given AUY’s low-cost mine portfolio and numerous long-term exploration/developments that GFI currently lacks.