Nanoco’s investment thesis is based on a patent infringement case that Nanoco has brought against Samsung – a multi-bagger upside if the lawsuit works out and 80-90% downside if the litigation fails. Nanoco Group is listed on LSE. Nanoco Group is listed on LSE. The US trial is expected to start at the beginning of October (having been pushed back from the 12th of September, the actual date is to be confirmed). Arguably the most interesting period for risk/reward is pre-trial so this idea is very timely. Nanoco’s operational business is the research, development, & production / licensing of nanomaterials for use in commercial applications – however, they have not yet secured any production / licensing for a live product, hence minimal revenue and minimal value in case the litigation fails. The focus of this thesis is on the legal case against Samsung.

Background of the dispute with Samsung

Nanoco was formed from a university research group (from the University of Manchester, in England), and has been researching nanoparticle and quantum dot technology for a long time, with the research & manufacturing headquarters being established in 2001.

Nanoco developed quantum dots for display purposes (e.g. high-end premium TV’s), which were importantly free from heavy metals which bring health risks such as cadmium. The quantum dots are referred to as cadmium-free quantum dots (CFQD). Importantly they also developed a method to scale up from lab to volume production.

Back in 2010 Samsung engaged with Nanoco to evaluate the quantum dot technology, and was provided samples by Nanoco. Samsung did not license the technology but went on to debut a TV with quantum dots at Consumer Electronics Show 2015. Further Samsung launched a TV with cadmium-free quantum dots in 2017 branded “QLED”. Nanoco believes Samsung has wilfully infringed a number of patents in the production of their QLED TV’s.

This 2017 article by Samsung, declares the development of CFQD technology for QLED TV’s as a breakthrough achievement by Samsung, crediting Dr Eunjoo Jang as the architect behind it.

However, you can see in this email from 2006 Dr. Jang asked Nanoco about their cadmium-free quantum dots – this is taken from the IPR materials, but there are many public documents from the PTAB IPR and the ongoing Trial available to review.

Some additional details can be found in this VIC write-up here. One important extra note from there is that Samsung does have a history of paying large awards for patent infringements:

Legal progress in the US

Key steps achieved so far in the US legal process are as follows. NANO obtained legal funding such that they can pursue the case, even though they have limited cash resources. The funder is not disclosed but presumably would have done significant due diligence before agreeing to back the case. The funder will take a cut if successful, which would leave Nanoco with 50% of a modest trial award, and up to 80% of a larger award.

The PTAB outcome was a material positive (shares traded at c. 27p prior to outcome being announced, having been closer to 20p when the PTAB oral hearing was heard in February 2022), and along with further positive updates (legal rejection of change to MCC definition, work package for European customer, oversubscribed fundraise), have given the shares momentum to now stand at c. 48p.

The trial is expected to start on the 3rd of October and should take one week. The jury will present their opinion including whether willfulness has been found (more on this below). The judge will take a few more months to make a formal opinion, which will include the willfulness multiplier and potential future royalty rate.

Launch of Legal Action in Germany

The USA represents approximately 35% of Samsung’s QD TV sales (as estimated by Nanoco), however, Nanoco has a worldwide patent portfolio and will be looking to either reach a global settlement with Samsung or take action in various other geographies if successful in the USA.

NANO has just announced (23rd August) that they have filed a funded lawsuit in Germany, which is one of the largest European markets for high-end TV’s. I think this is laying the groundwork to increase the pressure on Samsung, and particularly if they are successful in the upcoming US trial. There is a risk with the US trial that Samsung appeal the outcome, and attempt to drag out actually paying damages for a number of years. However, in Germany, it is much more common to grant an injunction prohibiting the sale of infringing products, if Nanoco can win the US trial it is very possible such an injunction could be granted in Germany. This would be a significant real-world impact on Samsung’s business and help push Samsung to agree to a settlement.

If Nanoco wins the case, it is very difficult to accurately predict damages. I will therefore suggest some figures that people can play with. Note if successful in the US trial this will award damages for historical US sales, and may or may not specify a royalty for future US sales – it will not include anything for non-US sales. However, if a settlement is reached with Samsung, my understanding is this would likely be a single amount to cover worldwide historical and future sales. 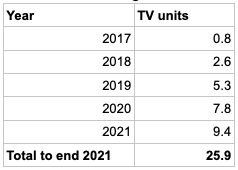 Damages per TV – I would recommend reviewing the earnings call transcript from 3rd Nov. 2021 where CEO Brian Tenner talks at length about damages (available on TIKR). There are various damages models:

Management clearly said that the individual component value would be the most conservative model here. The calculations would go up by proving how fundamental the technology is to those Samsung TVs:

When we talk about a modest outcome, we — as I mentioned earlier, U.S. only historically only, but a modest outcome for us would also be using the worst case damages model, i.e., just looking at the individual components. If the jury were persuaded that actually know this technology fundamentally enabled the device and went for one of those other 2 higher-value models, then you would be moving significantly up from that.

Nanoco is alleging wilful infringement, and I would note the collaboration between the parties before Samsung decided to produce the quantum dots without paying Nanoco anything for the IP. If successful, this can result in a wilfulness multiplier being applied by the US judge of up to 3x, however, I have used 1.5x which may be more realistic – 1.5x rate has been the historical average in Eastern Texas:

And what that means is, did Samsung knowingly and deliberately infringe our IP? Our view is that they did, which is why we’re alleging that it was willful. And the reason that’s relevant is that, if willfulness is find, damage multipliers can be up to 3x the initial number from the jury. Now I should point out that the historical practice in the Eastern Texas is actually more like a 1.5x multiplier.

See below for Low & Medium estimates for royalty/damages amounts to approx. trial date Q3 2022, note the current market capitalization is only £153m: 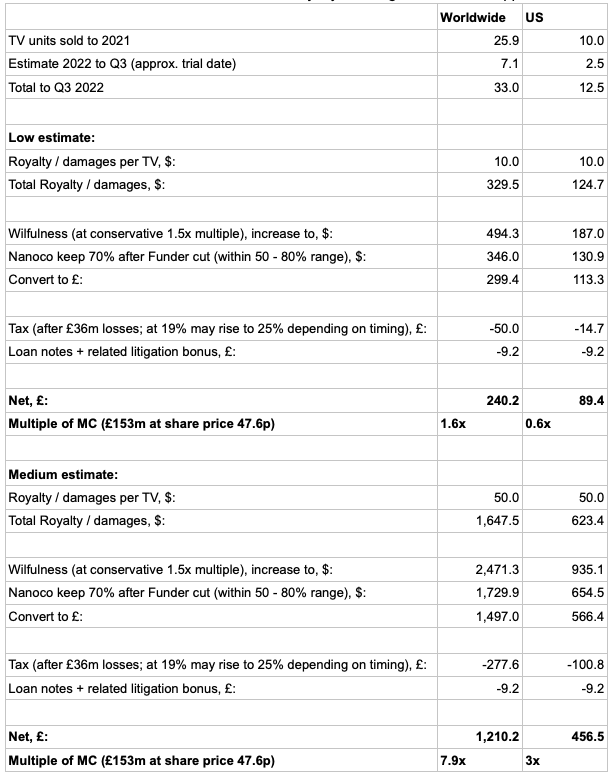 The above figures do not include future years which are very significant given the 2021 run-rate of sales, and expectations per Brian Tennor’s 3rd Nov. 2021 transcript “Future sales are likely to be larger because the rate of sale of QD TVs is growing. And you then may have the kick-on benefit of generation 2 QD TVs.” If we assume annual TV sales of 10m, just slightly higher than 2021, this would produce a gross yearly royalty amount of $100m at the low estimate ($10 / TV), and $500m at the medium estimate ($50 / TV). The last of the 4 core quantum dot patents expire in early 2028, with another patent out to 2035 (I assume this is the ‘068 patent) – however as part of narrowing the case pre-trial Nanoco has withdrawn claims for the ‘068 & ‘557 patents. I am not sure exactly which of the 4 core quantum dot patents has the last expiry date, but if we assume one of those remaining expires in early 2028 this provides for c. 5 years of further coverage. Simply taking 5x the low estimate above is $500m, or 5x the medium estimate is $2,500m.

As can be seen from the saga with Samsung, Nanoco is very dependent on an end product being produced and sold to consumers that integrates their technology and is being paid for it.

Operationally they are focused on supplying quantum dots for infra-red sensing opportunities, they are working with 5 different customers and 8 distinct products, but it is not yet clear if any will move into production or not. The expectation is that in H2 CY 2022 they will have visibility as to whether one of these customers will move into live production in CY 2023 or not.

I don’t think the company has confirmed, but Edison has inferred that Nanoco’s “important European electronics customer” is ST Microelectronics. They also suggest that if an end customer of ST Microelectronics were to deploy the sensing application in a key mobile phone handset this could generate £15-20m of annual revenue to Nanoco.

If they can get real production orders (or agreed royalties) this part of the business could have real value, but I would not have any confidence in ascribing it significant value until they achieve this.

The (expensive) litigation process is funded by a third party, and the company has done well at cutting costs in order to maximize its cash runway, further, it raised £5.4m in equity in June 2022 at 37p / share. As such they have a cash runway to CY 2025 – far past the imminent US trial (although appeals may follow), and it’s also possible they will have real production revenues prior to this point.

Therefore, I view the risk/reward as incredibly compelling during this pre-trial period where a substantial settlement could be announced which would be transformational for the company. Once the trial starts it becomes much more binary, and while still interesting I would likely look to size the position much smaller.

Other points to note: