SSI tracking portfolio rebounded nicely with a +9.3% gain in August. We are now up just over 11% YTD. A detailed performance breakdown is provided below.

The graph below details the individual MoM performance of all ideas that were active during the month of August 2022. This chart excludes Quick Ideas. 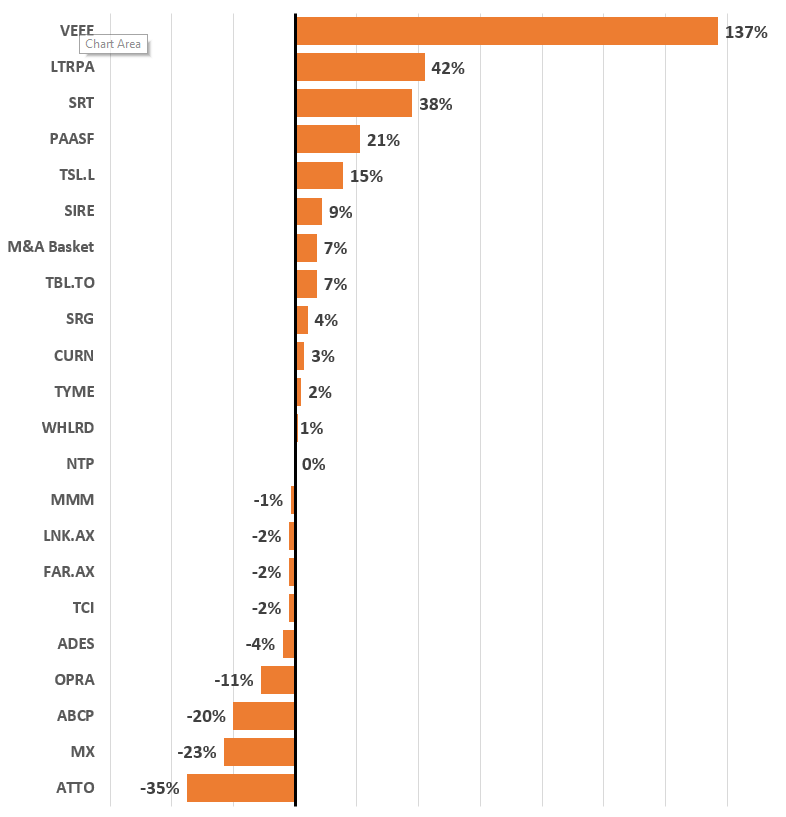 Twin Vee Powercats (VEEE) +90% In 8 Months
Twin Vee is a powered catamaran manufacturer. The company IPO’ed in Jul’21 raising funds to develop electric motorboats. Just half a year later Twin Vee unexpectedly filed to list its electric boat business as a separate entity (Forza X1) aiming once more to raise funds for the development of electric motorboats, while retaining a majority stake in Forza as well the previously raised cash funds with the parent. Assuming successful Forza X1 listing, the pro-forma sum of the parts valuation of VEEE indicated the company was materially undervalued whereas cash already on the balance sheet provided good downside protection. The thesis worked out better than expected. This week the company completed a very successful spin-off of Forza X1, with stock shooting +130% on the first day of trading. As VEEE retained 70% ownership in the newly listed company, its own stock also shop-up +100% on the day. As there were no possibilities to hedge FRZA exposure (despite still material discount to SOTP valuation), we closed the idea with 90% gain.

Liberty Trip Advisor (LTRPA) +42% In 3 Weeks
This arbitrage was back on our radar for the 3rd time – the two previous bites on this apple were successful. LTRPA is a tracking stock for Liberty’s 29.2m shares in TripAdvisor (TRIP). Tracking stocks often trade at a small discount to their NAV, which used to be the case with this stock as well till March 2020. The pandemic hit travel stocks, while during its peak LTRPA also restructured its balance sheet binding its debt position to TRIP’s share price. All of this has significantly affected the volatility of its NAV and share price creating multiple opportunities for arbitrage. This particular time LTRPA started trading at 50% discount to its NAV following better-than-expected quarterly results from TRIP. And this arbitrage worked out like a charm for the third time in a row, gaining 42% since we published the idea in mid-August. The easy money on this trade has been made, but a further 20% spread to NAV still remains.

Pan American Silver (PAASF) +44% in 5 Months
PAASF is a tradeable CVR, which will get exchanged into 0.0497 PAAS common stock upon the restart of the Escobal mine. It traded at a wide spread of to-be-received PAAS stock due to geopolitical issues regarding re-opening of the mine. However, it seemed that the process was moving in the right direction. CVR spread narrowed down as the pre-consultation phase finally ended and the process has entered the consultation phase. The first meeting was set for the 21st of August. More details are expected with the release of Q3 results. The remaining spread stands at 24%. Keeping in mind the extended timeline likely remaining till the full opening of the Escobal mine as well as the risk of any further hurdles on a way, the remaining spread seems to be quite fair. In total 44% gain on this arbitrage in 4 months.

3M Company (MMM) -1% in 1 Month
A standard split-off situation. 3M was divesting its Food Safety business to Neogen. Shareholders of MMM had the option to exchange their MMM shares for newly issued NEOG shares. Every $100 of MMM stock accepted in the tender was be converted into $107.53 of NEOG stock subject to the upper limit of 7.3515 NEOG shares per each MMM share. As always odd-lot holders (99 shares or less) were to be accepted on a priority basis. Historically these split-off transactions tended to be priced at the upper limit, however, just a couple of days before the exchange ratio was set in stone, MMM announced an unfavorable court ruling relating to another division, causing a sell-off in its shares. The Final MMM/NEOG exchange ended up at 6.7713 or 10% below where we hedged the position, driving our arbitrage to 1.5% loss. Those who initiated the position only after the exchange ratio was finalized, made a risk-less $1600 per account.

Advanced Emissions Solutions (ADES) -25% in 5 Months
Advanced Emissions Solutions had almost all of its market cap in net cash. The operating activated carbon business was valued at around $7m. This seemed too low given the segment used to generate $12m-$20m in EBITDA and recently started growing again. Back in May’21, the company initiated a strategic review process aiming to maximize shareholder value. SOTP framework indicated substantial upside assuming the activated business could be sold for some multiple of its historical EBITDA. After more than a year in the strategic review process, finally in Aug’22 management made the announcement, but it was not what shareholders were expecting. Basically, ADES was giving 50% of the company and its large cash balance to a coal waste startup with little visibility and SPAC-like projections. Not clear why this path was chosen instead of distributing cash to shareholders. As a result, the idea was swiftly closed post announcement. Overall 25% loss in 5 months.

Big River Gold (BRV.AX) +9% In 3 Months
Advanced-stage gold exploration company Big River Gold is getting acquired by a consortium of its largest shareholder Dundee Resources (19.3%) and mid-tier gold/copper miner Aura Minerals. Consideration stand at A$0.36/share in cash. Given the tiny size of the merger, regulatory approval risk is negligible and shareholders are expected to support the transaction. As the spread got almost eliminated at the end of August, we have closed this transaction with 9% gain in 3 months.

Regional Health Properties (RHE-PA) -5% In 4 Months
Regional Health Properties (RHE) was offering to exchange its current Series A preferred shares for new Series B preferred shares and amend the Series A charter. This would have lowered the current liquidation preference (and accrued interest) on Series A from approximately $38/share to $10/share for the new Series B (preferreds were trading at $4.3/share at the time of publishing). The company also intended to redeem the majority of the preferred over the next 4 years at gradually increasing prices. The situation offered 100% upside or 25% IRR over four years based on indicated redemption schedule. The exchange and charter amendments required approval by 2/3rds of Series A shareholders and a majority of common shareholders. With numerous postponements of the shareholder vote, the key risk was that management was having trouble tracking down legacy common shareholders of record in order to get the scheme approved. Eventually, the exchange offer did not meet the required approval thresholds and the offer was terminated, resulting in 5% loss in 4 months on the RHE preferred position.

Turtle Beach (HEAR) -45% In 3 Months
Turtle Beach was a $300m gaming accessories company that recently reached an agreement with The Donerail Group (owned 8.7% of HEAR), an activist that has hounded the company for over a year and made two takeover offers. The agreement included the addition of three Donerail directors to the company’s board and the formation of a strategic committee “for the purpose of overseeing an expanded and wide-ranging process to identify a buyer for the Company“. The strategic review was clearly set up to sell the company. The company received inbound interest from multiple parties over the last month and was also reaching out to strategic and financial buyers that have previously shown interest. HEAR traded at 5x NTM EBITDA – below the historical levels and below public comps. However, it was a strong covid beneficiary and it was not clear how sustainable these earnings are. Despite quite bold statements suggesting the company would get sold swiftly, this has never materialized. And disappointing quarterly results have driven the company’s share price down. As a result of this, the idea was closed with a 45% loss in 2.5 months.