SSI tracking portfolio is down by -8.5% in September. We are now up 1.7% YTD. A detailed performance breakdown is provided below.

During the month we published 3 new Portfolio Ideas, highlighted 17 Quick Idea Pitches in our weekly reports, and closed 3 ideas.

TRACKING PORTFOLIO -8.5% IN SEPTEMBER AND +561% SINCE INCEPTION.

The graph below details the individual MoM performance of all ideas that were active during the month of September 2022. This chart excludes Quick Ideas. 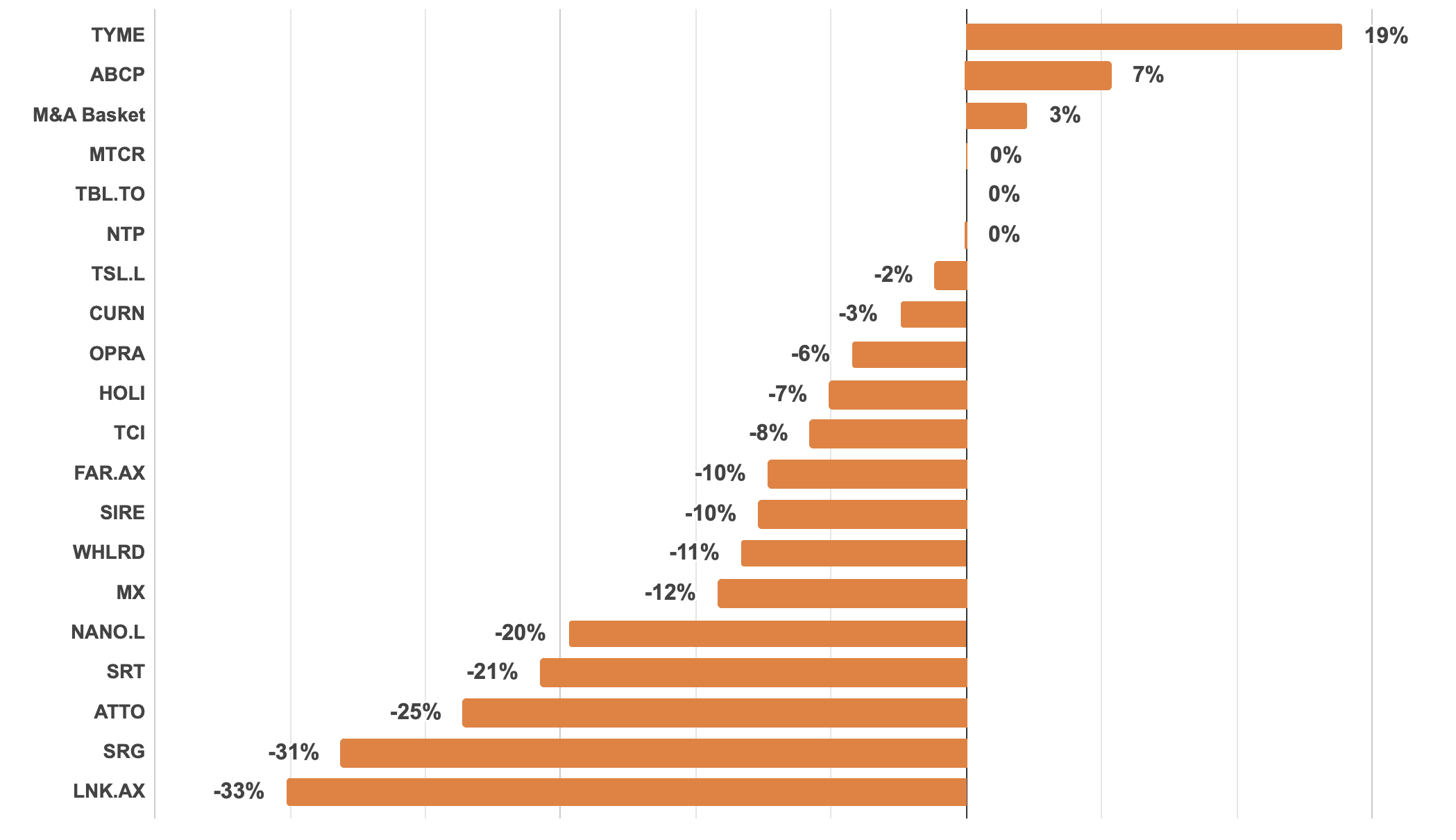 Tyme Technologies (TYME) +33% In 2 Months
Tyme Technologies was getting acquired by cancer-focused clinical-stage biopharma Syros Pharmaceuticals. The transaction was basically an equity raise for the buyer – SYRS was getting TYME’s net cash (estimated to be $60m at closing) by issuing around 74m new shares (also worth $60m at the time). TYME’s drug development programs were about to be put on hold and all exec positions in the combined company were retained by the existing SYRS leadership. Shareholder approval was practically guaranteed as 28% of SYRS and 30% of TYME shareholders were in support. In parallel to the merger, the buyer was also conducting a large PIPE (equity tripled), where many of its major shareholders (prominent biopharma investors) participated showing strong confidence in SYRS pipeline and share price support. As expected, the transaction handily satisfied both closing conditions. We closed the idea with 33% in 2 months.

StarTek (SRT) -19% In 6 Months
Call centre operator Startek (SRT) received a $5.40/share bid from its major shareholder (owned 55%). The offer seemed opportunistic and cheap compared to peers and other industry transactions. Moreover, there were rumours of a potential competing bid. However, the market environment turned sour and the buyer faced problems raising the needed financing. The offer was cut to $4.65/share but SRT’s special committee rejected it as undervaluing the company. The buyer decided to stop pursuing the takeover and withdrew the proposal. Even though SRT is now arguably cheap at current prices, the original merger thesis has failed and the idea was closed with a 19% loss in 6 months.

Oklo Resources (OKU.AX) 14% In Months
Australia-listed junior gold miner Oklo Resources was getting acquired by a much larger peer B2Gold. The consideration stood at 0.0206 BTO.TO shares + A$0.0525/share in cash. B2Gold is a C$5bn market cap gold miner loaded with cash. For the buyer, this was a tiny purchase and it seemed to make sense at least from geographical proximity of OKU mines to its own assets. Plenty of shortable, cheap (1% annual fee) shares were available for hedging on IB. As usual, approval from 75% of OKU votes cast + 50% of shareholders present and voting (headcount) was required. Directors owned 3% and supported the merger. Eventually, the merger with B2Gold played out as expected closing on the 19th of September. The idea generated a 14% profit in 3 months.