Happy New Year everyone! With the holiday season already behind us, the time has come again to look back and reflect on performance during the last year. But first things first – I want to say a huge thanks to all subscribers for continuing to support SSI, sharing profitable investment opportunities, and actively participating in discussions – without you, our work would not be as exciting as it is today. Thank you all!

2022 was a challenging and painful year for most investors. But at the same time, the increased risk aversion and high volatility presented plenty of event-driven opportunities to dig into. During the year we have:

All things considered, the performance of ideas published on SSI was rather solid, with SSI Tracking Portfolio generating +13.6% during 2022. While this is far below the 50%+ returns posted in 2020 and 2021, such a result is still way ahead of the market returns (S&P 500 fell 18% and most merger arb ETFs generated single-digit losses). It seems that our strategy of picking out attractive special situation opportunities continues to work well even in bearish markets. Here is a table with monthly returns over the last six years. A full breakdown of 2022 returns by individual positions is shown at the bottom of this post.

I’m not going to dive into any speculations of what 2023 might bring, but I am happy to see market exuberance fading and equities starting to trade at much more reasonable levels vs last year. I am sure this year will gift us plenty of exciting investment opportunities. I and the whole team at SSI are ready to dig in.

I will spend the rest of this post reflecting on some of the mistakes made as well as common themes that delivered sizeable gains. Let’s start with what worked out well.

Aside from the category themes listed below, I would also like to highlight the 3 biggest SSI portfolio winners of 2022 – RENN litigation with +93% during 2022, VEEE spin-off situation with +91%, and ESSC volatility sale with +80% – all very interesting and very different setups.

MLP buyouts. These were probably the most consistently profitable special situation investments for SSI. Throughout the year, MLP buyouts have gifted us with several rather similar setups that have all worked out great so far. MLP is an outdated structure that no longer has any reason to exist, meanwhile general partners usually have strong financial and strategic incentives to eliminate the structure. The playbook is usually conducted along these lines – general partner keeps the MLP dividend payouts depressed, despite a strong recovery in underlying earnings and bright prospects ahead, and then opportunistically lowballs the initial offer to buy out the minority shareholders. Eventually, after a few months of deliberations with the conflicts committee, the initial offer gets a meaningful price bump. Investors mark solid returns while taking minimal risks and the downside is always well protected by improving business fundamentals.

Mispriced biopharma mergers. Development stage biopharma space took a huge hit in 2022 and a high number of biopharma stocks started trading at very wide discounts (50%-70%) to net cash. That was true even for the companies that have terminated their development programs and were undergoing strategic reviews – a number of such cases were covered in weekly Quick Pitches. This industry dynamic also delivered a couple of highly attractive merger arbitrage opportunities that seemed to be completely overlooked by the market. The spreads stood in the 20s and 30s range. In these setups, the buyers decided to ‘raise cash’ by acquiring other biopharma peers in stock-for-stock mergers. The buyers openly stated to be after only the cash on the balance sheet and had little interest in the development pipeline of the target firms. The strategic rationale was straightforward, while regulatory and shareholder approval risks were basically non-existent. Several other factors also hinted high likelihood of successful closing. Despite this, the wide spread in TYME case persisted even after all the transaction conditions have been satisfied and the merger was due to close on the next day. The market was simply unwilling to look under the hood to see that these setups are not the usual microcap biopharma mergers.

Chinese privatizations. Another highly fertile ground for mispriced setups was US-listed Chinese privatizations. With the investor sentiment toward all US-listed Chinese stocks at rock bottom, the market simply seemed to ignore any buyout offers by management / controlling shareholders. This dynamic has opened up multiple arbitrage opportunities with spreads in the twenties and thirties, even though deeper research showed a high likelihood of successful closing and minimal downside risks.

Biggest mistakes of 2022. The number of SSI positions that ended up with very substantial losses (30%+) for the year was relatively high. Too high. One common theme for most of these cases was my reluctance to close out the positions despite a clear and sometimes material shift in the initial thesis. A prompt exit upon the change/failure of the initial thesis would have limited the losses substantially, however, there always seemed to be good reasons to hold on just for a bit longer as the next catalyst always seemed right around the corner and the stock now was much cheaper. However, the experience during 2022 has shown that those extra catalysts often prove elusive. Adapting the investment thesis to the changed circumstances is never a good practice and should be avoided most of the time, especially in the event-driven space. Hopefully, I have learned from this.

Several of the biggest losses on SSI during 2022:

Breakdown of 2022 performance by individual names 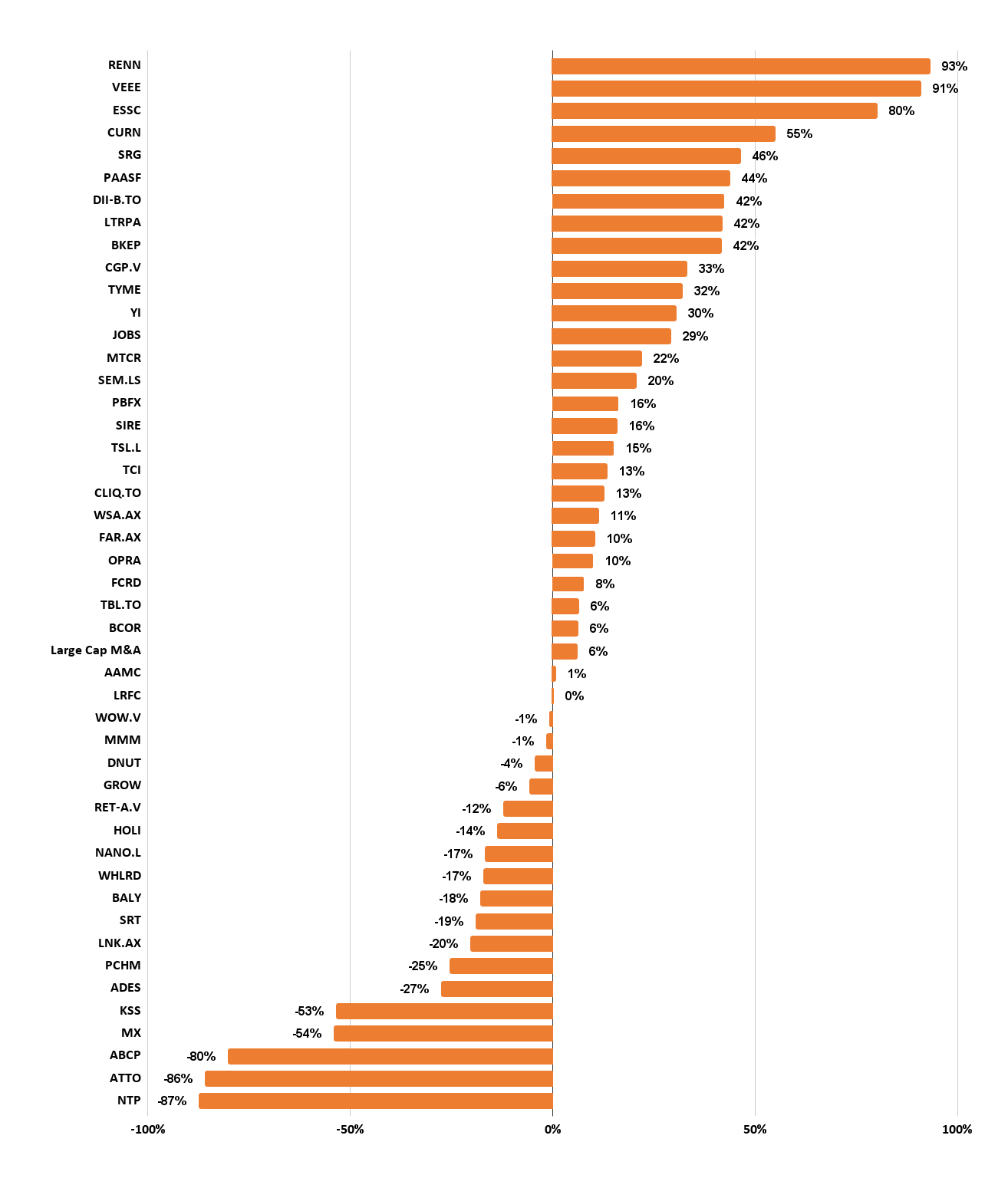